Dog Service Announcement: The Kibble Crunch Is Not the Sound of Healthy Food 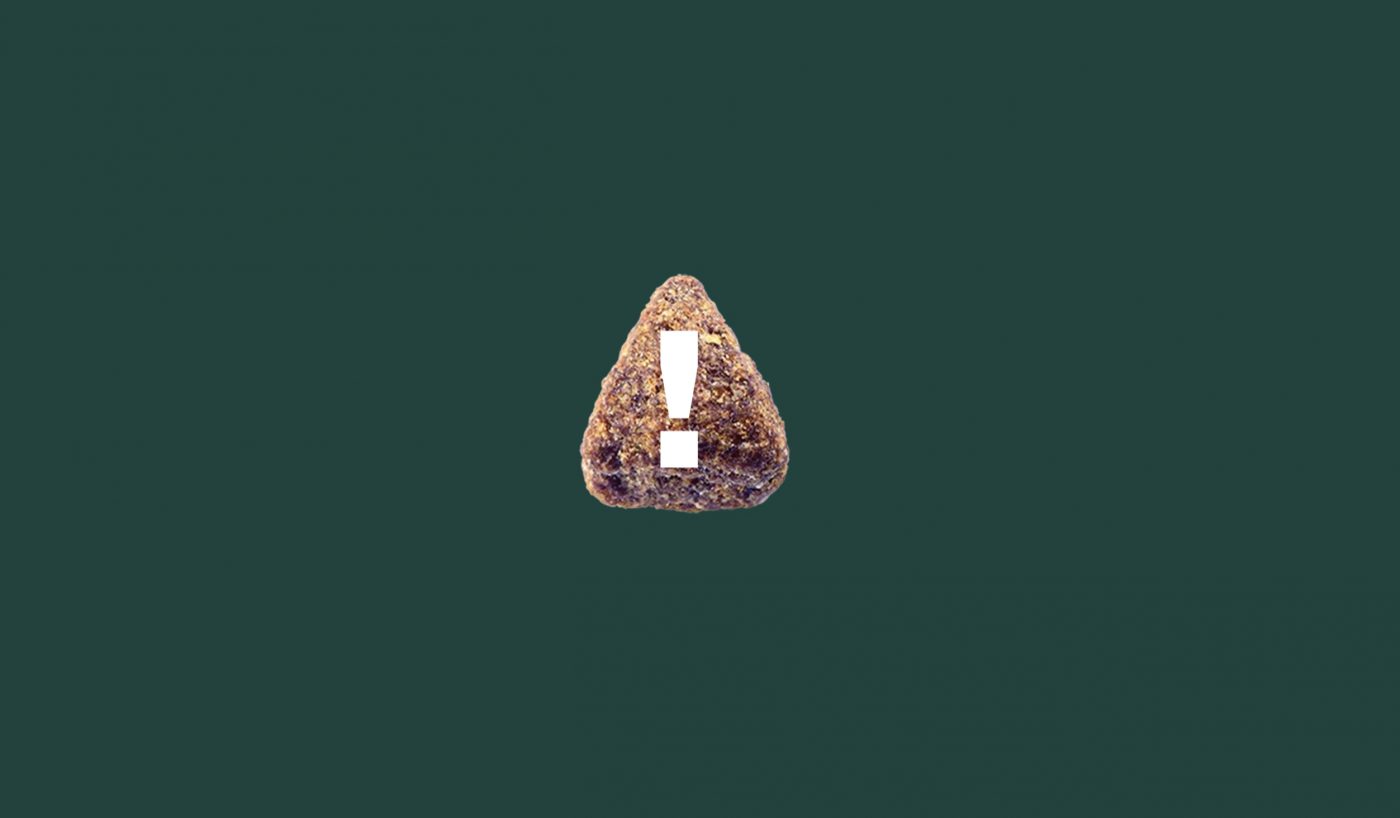 When it comes to food, there are two kinds of crunch. One is the naturally occurring crisp snap of a fresh apple or raw carrot. The other is the brittle crunch of processed food like potato chips or cookies. Only one of these forms of food we consider to be healthy.

And yet, when it comes to dog food, there’s an enduring assumption that crunchy, processed kibble is healthy for our canine companions to eat at every meal. But, like kibble itself, when you apply any pressure to this idea, it shatters into a million little pieces.

Let’s take a hard look at this hard food, and serve up some equally hard facts about crunchy kibble and what that sound means for the health of dogs.

When you hear that kibble crunch, what you’re hearing is the sound of a high-heat manufacturing process that was invented a long time ago, for our convenience—not for the health of dogs. The process used to get that crunch is the opposite of healthy; it turns subpar ingredients into dried pellets, decimating whatever nutrients those ingredients may have had and creating carcinogenic compounds along the way.

Here’s an extremely condensed version of how kibble is made:

First, the ingredients: Kibble is typically made from protein, fat, grains and a mix of vitamins. The protein often includes leftovers from the process of making human food. But due to certain regulatory loopholes, other stuff can end up in there as well, including but not limited to: expired packs of meat (wrapping included), restaurant grease, road kill, and so-called 4D meats (diseased, disabled, dying, and dead animals—which includes euthanized animals). Commercial pet food ingredients only have to meet the standard of animal “feed,” not edible “food,” so all of this is considered A-OK.

These ingredients can make their way into pet food via a high-heat process called “rendering” that blasts them to kill pathogens, and separate solids from moisture, producing the powdered substance you see on pet food labels called “meal.” Meal and other ingredients have to be mixed with starches, like potatoes, rice, soybean meal, corn meal, cracked wheat, and barley, and combinations of those things, which act like a glue to bind the ingredients together into a dough (So, yes, kibble is a dough-based food, just like those cookies).

The dough is heated (another application of high heat) before proceeding into the extruder, a machine that’s like a big pasta maker. The dough is extruded, or forced through specially cut dies, under high heat and pressure, and cut into the small, uniform shapes you know as kibble. This is the same process that’s used to make crunchy breakfast cereals, cheese puffs, and plenty of other foods that definitely should not be eaten for every meal.

Because kibble is designed to sit in bags on shelves and in pantries for long periods of time, the manufacturing process also includes high-heat drying to reduce moisture even further, and the addition of preservatives.

Finally, because this lengthy, desiccating process robs even “good quality” ingredients of any nutritional value and flavor, palatants (fats that make the food taste like something to dogs) and vitamins are sprayed on the finished product.

Ta-da! You’ve got crunchy kibble. But the result of this process is anything but healthy.

The ingredients in kibble sound gross, but it’s more than just the “ick factor” that makes them less desirable as dog food components—they don’t provide as much nutritional value to your dog as clean, whole meats. But even if pet food companies used better ingredients in their food — as some claim to — the process used to make dried balls of kibble strips the food of its nutritional value.

Studies have shown that the extrusion process reduces food’s bioavailability, the degree to which nutrients in food can be used by the body. As one study concluded, “undesirable effects of extrusion include reduction of protein quality,” decrease in palatability, and loss of vitamins.

Crunch = the presence of known carcinogens

This high heat process also creates, or adds, compounds that have been shown to be carcinogenic in humans and lab animals.

Kibble has been found to contain heterocyclic amines, a chemical formed when meat is cooked at high temperatures, and a suspected carcinogen. One study analyzed 25 commercial pet foods and found carcinogens in 24 of them and posited a “connection between these heterocyclic amines and cancer in animals consuming these foods.” Later research  found a type of heterocyclic amine, PhIP, in the fur of 14 out of 16 dogs tested. When starchy foods like kibble are cooked at high temperatures, the process can also produce a compound called acrylamide. The FDA has issued warnings about the substance, and recommended that it be reduced in (human) food because it’s been shown to cause cancer in lab animals. 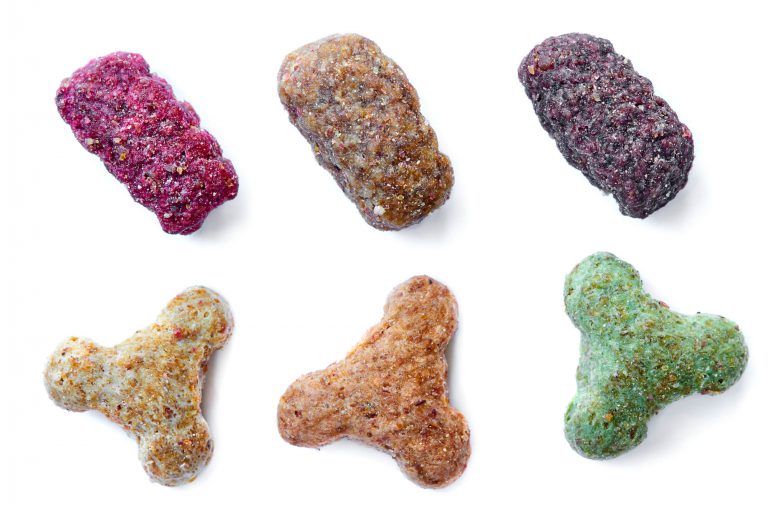 It’s easy to overlook the importance of hydration to your dog’s health. Keeping your dog hydrated is important to a range of bodily functions including digestion and kidney health. Hydration is provided by fresh water, but your dog’s food should also be providing moisture to your dog’s body, not removing it. Unsurprisingly, because kibble is dehydrated, it can have a dehydrating effect on your dog. Long-term, the dryness, and the fillers and toxins the food contains can tax your dog’s liver and kidneys, and contribute to a range of other ailments.

In fact, kibble does no such thing—and likely even contributes to dental disease.

According to VCA Animal Hospitals, more than 80% of pets older than three years of age have active dental disease. Since more than 80% of dogs eat kibble as their primary diet, it’s easy to see that kibble can’t be the dental helper that pet food companies have led us to believe it is.

The myth rests on the idea that the crunch of kibble performs some sort of scraping function that helps clean teeth. But if you think about what happens when you eat crunchy cookies, the premise falls apart like so much extruded, dried dough.

“It’s folklore,” veterinarian Dr. Jonathan Block told us about the kibble-clean teeth connection. Regular kibble is an ultra-processed food and as such can contain substances that actually fuel inflammation in the body, including in the tissues of the mouth. Most kibble is starchy, and full of fillers that break down to sugar, which contributes to plaque and bacteria as it sticks to dogs’ teeth.

Any benefits that kibble promises “don’t justify the other health consequences that dogs might experience eating poor quality food that doesn’t have good bioavailability and that can lead to allergies and other conditions,” says Dr. Block.

The Farmer’s Dog food has no crunch whatsoever

But here’s what it does have:

Clean, human-grade proteins, mixed with simple produce, and balanced with vitamins and minerals. Our ingredients meet human-food standards according to the USDA which means they qualify as actual food, not animal “feed.” Fresh, whole meats are full of the vital amino acids your dog needs, so they provide complete nutrition for your dog. And because we gently cook our food, rather than blast it multiple times at high heat, it retains that nutrition. The resulting food is digestible and bioavailable, which means your dog’s body can absorb and use those powerful nutrients.

Our customers’s dogs don’t seem to miss the crunch. They’re too busy enjoying the sensation of good, whole food on their taste buds, and the effect it has on their bodies.