How to Adopt One of the 4,000 Beagles Rescued from a Virginia Breeding Facility 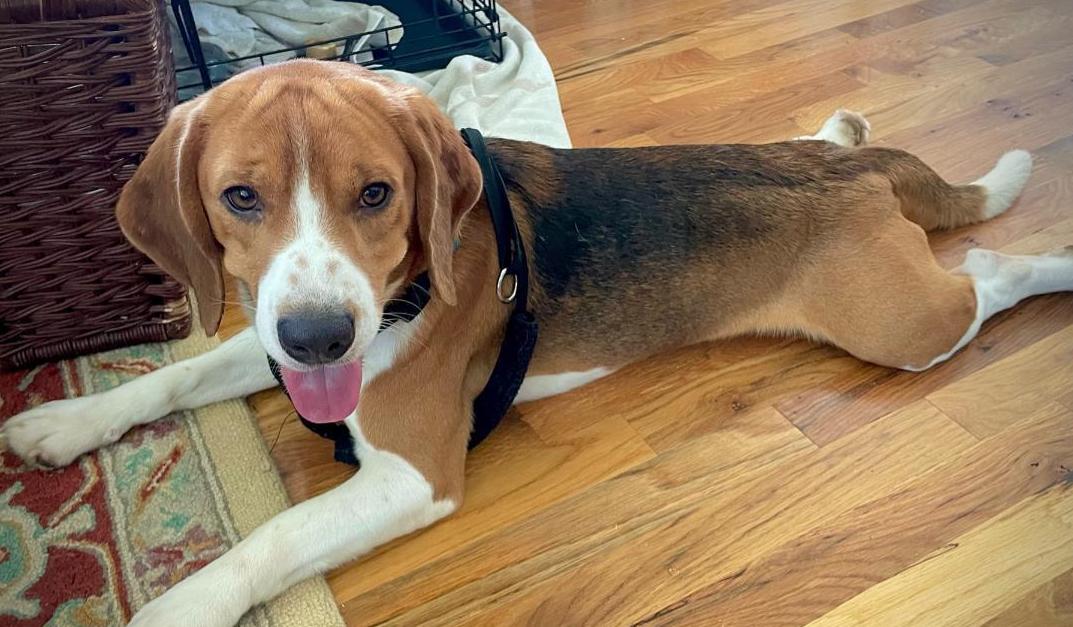 Whether or not adopting one of these rescue beagles is your plan, here are some tips for welcoming and training a dog who’s had a difficult start to life.

In July, almost 4,000 beagles were rescued from from a mass breeding facility in Virginia, where they’d been subjected to inhumane conditions. Now, they’re looking for humans who will give them the love and care they deserve.

Leann Tenbusch of Triangle Beagle Rescue in North Carolina—which recently placed 79 of these beagles with foster families while they await permanent homes—emphasizes that their potential adopters should be aware of the responsibility involved. “I know a lot of people say ‘I want to be a part of that story,’ which is awesome,” she says. But, like many other dogs, these beagles are “a work in progress” and need people who can commit to caring for them. 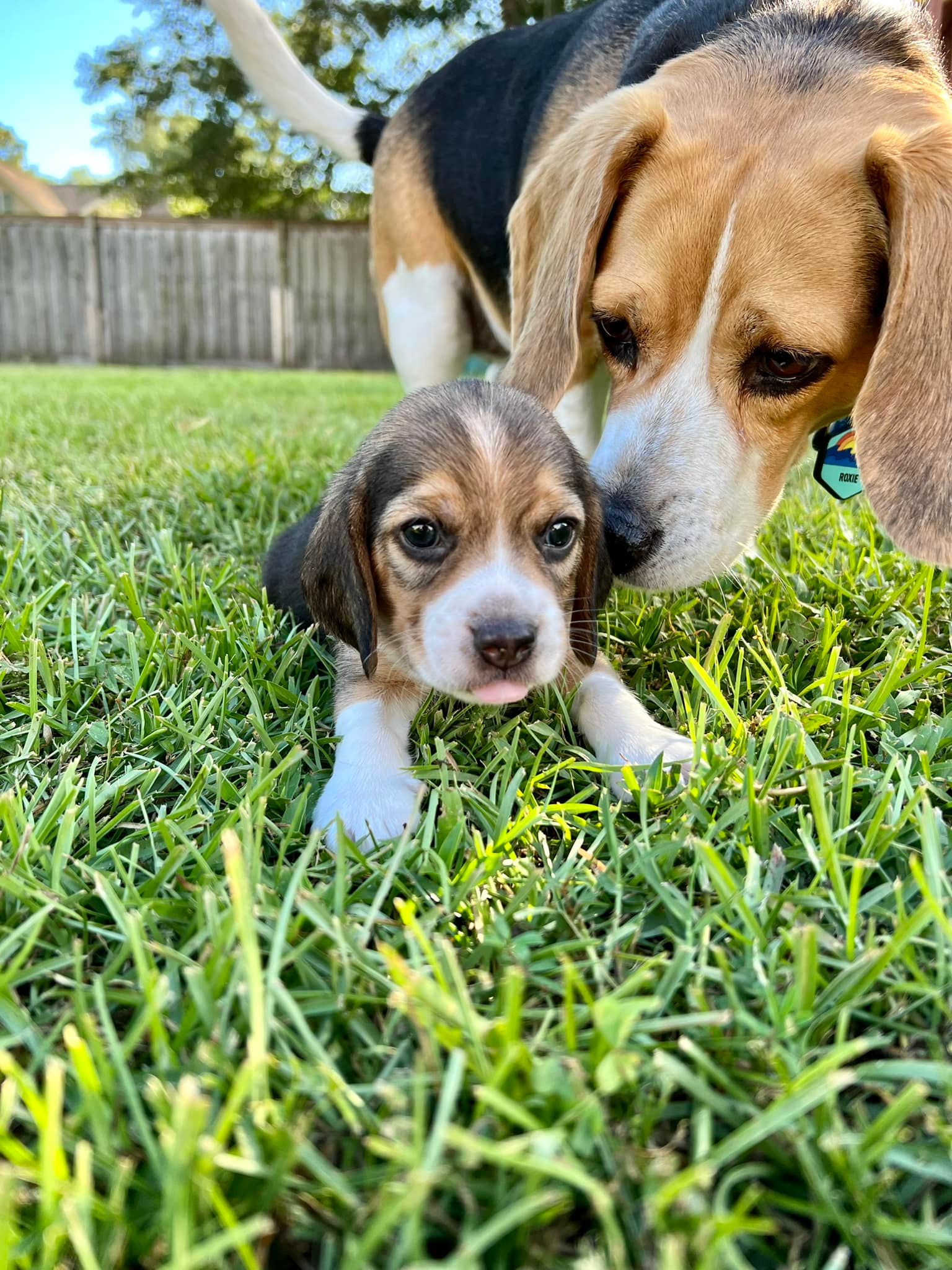 Here’s how to add one of the rescued beagles to your family, and how you can decide whether that decision is right for you and the pup.

How to decide whether you should adopt a particular dog

The right conditions must be in place for a new dog-human relationship to succeed. First, make sure you’re equipped to care for any dog at all. Then, evaluate whether the particular dog you’re thinking about is a fit for your current situation, and vice versa.

First, consider your own lifestyle: How much time will you have to dedicate to the dog every day? What’s your previous experience with dogs? Who else lives with you—humans and pets? What type of home do you have? What will be your budget for food, medical costs, and other expenses like boarding or a dog walker? These are matters you should work out in advance.

You should learn as much as possible about the specific dog you’re considering. Breed is one factor to keep in mind, but every dog is an individual with different traits and a different history. Beagles are bred to hunt, so they’re prone to follow their noses and need a job to do. They’re also liable to bay. So if you want a dog who doesn’t need much physical or mental stimulation—and if you insist on a quiet roommate—you may want to think twice.

These particular beagles have come from the environment we mentioned above, which may mean that they need some extra love, attention, training, and patience from the humans who bring them home.

“We make it very clear,” says Tenbusch of the dogs rescued from this breeding facility, “that they are not house-trained and they are not crate-trained.” In fact, some of the dogs find it triggering to be placed in a crate. In those cases, she says, “you may need some area you can block off, or a room—or just work at home” so you can be around the beagle most of the day.

And each individual beagle, even out of this group, will have a distinct personality, just as people would even if they’d gone through similar experiences.

If you want to know more about the dog you might adopt, don’t be shy—ask the rescue organization every question you can think of. They may know much more about them than you could find out from a brief visit.

“The longer the dog has been in foster, generally, the more accurate information you’re likely to get,” says Denise Herman, founder and head trainer at Empire of the Dog in New York City. “If it’s going to a foster home and you’re getting it the next day, you’re rolling the dice.” She encourages observing the dog and asking questions to find out how they’re doing. She warns that some dogs who haven’t been properly socialized during puppyhood might have a very hard time transitioning to a busy environment like a city. “If the dog is being fostered in a situation that’s more similar to yours than the situation it’s coming from, and it’s doing well,” she says, “that’s a good sign.”

We have an extensive guide to dog adoption if you are ready to take a closer look at the subject. 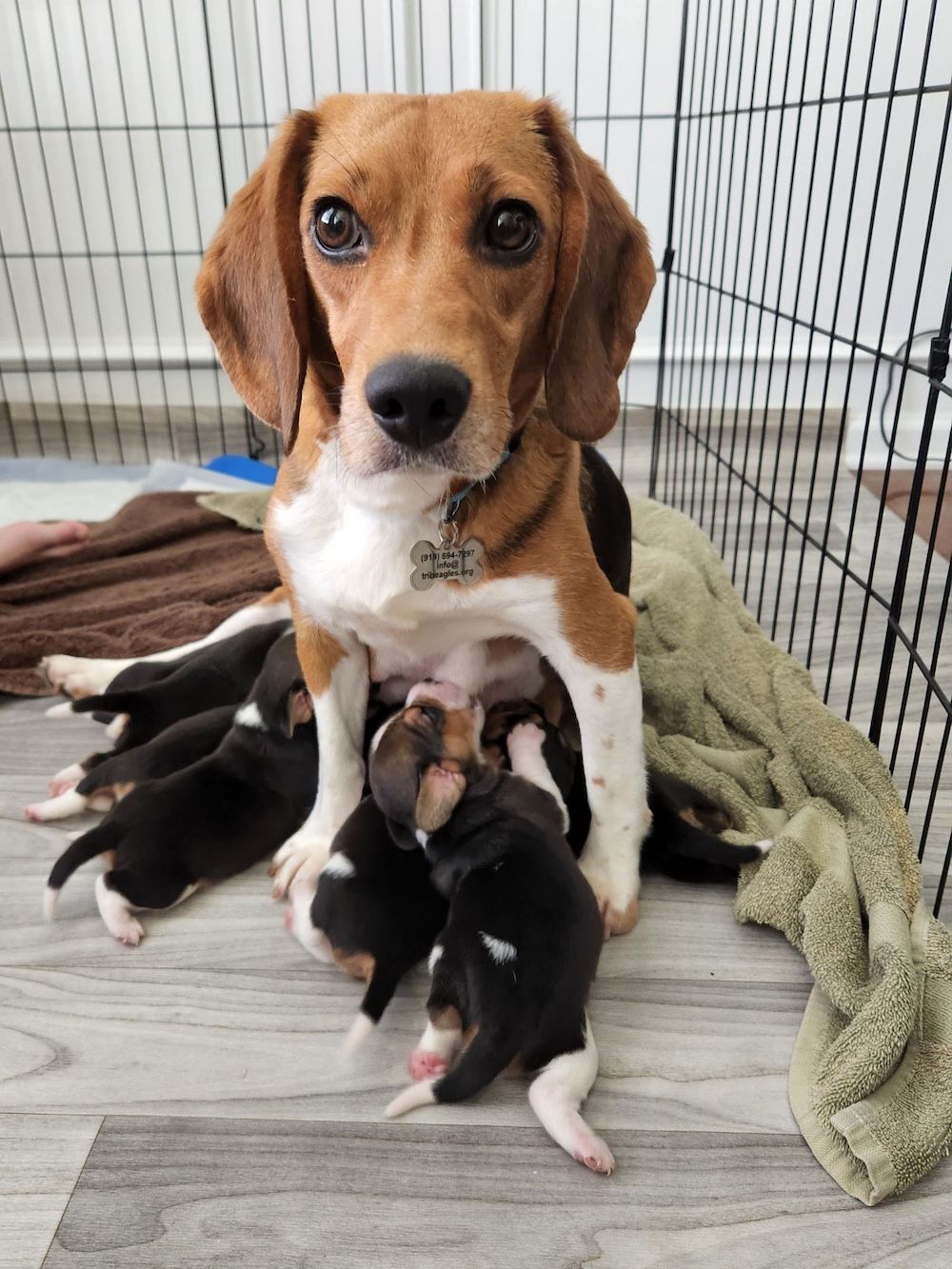 Maple, one of the rescued beagles. Photo courtesy of Triangle Beagle Rescue.

Any dog, no matter where they come from, will need help and time to get used to a new place, surrounded by people and animals they didn’t know before. Quality time, training, and understanding are always requirements. Each of these beagles will have their own particular needs, but there are certain commonalities. They started their lives indoors, without exposure to things like trees and grass that most homed pups can take for granted.

Says Tenbusch of the dogs currently living with Triangle Beagle Rescue’s foster families: “they are starting to kind of thaw from their life at the breeding facility. Some will take treats. Some still don’t want treats. Some will do zoomies and snuggle. Some are a little more shy than others, but they’re really starting to come around.”

As you begin your training efforts, remember that these dogs will have gone through a lot of rapid change in their lives, and might not immediately trust that they’re safe with you. Both Tenbusch and Herman say that you can expect the first few days to be especially challenging. Even with puppies, Herman says, “I tell people just ride the tiger a little bit—just relax.” She says to hope for some progress within a couple of weeks, with other changes possibly taking a year or more. Whether that’s okay for you, she notes, “depends on what you’re asking to change.” If the dog is a bit shy for a couple of years, that will be easier to handle than a dog who’s showing aggressive behavior.

Tenbusch references a “rule of threes” as a general guideline. Like Herman, she sees the first three days as a decompression period. After three weeks, Tenbusch says, a dog will often get into a routine—understanding when humans leave and return, when they eat meals, and so on. And after three months, she says, “they really start to settle in.” This is not a hard and fast rule—every dog is different—but she finds it to be a helpful way to look at things.

And remember, if you do encounter behavior problems that you are having trouble resolving—or you feel like your dog is not happy—speak up. Reach out to a qualified trainer or your rescue organization for help. 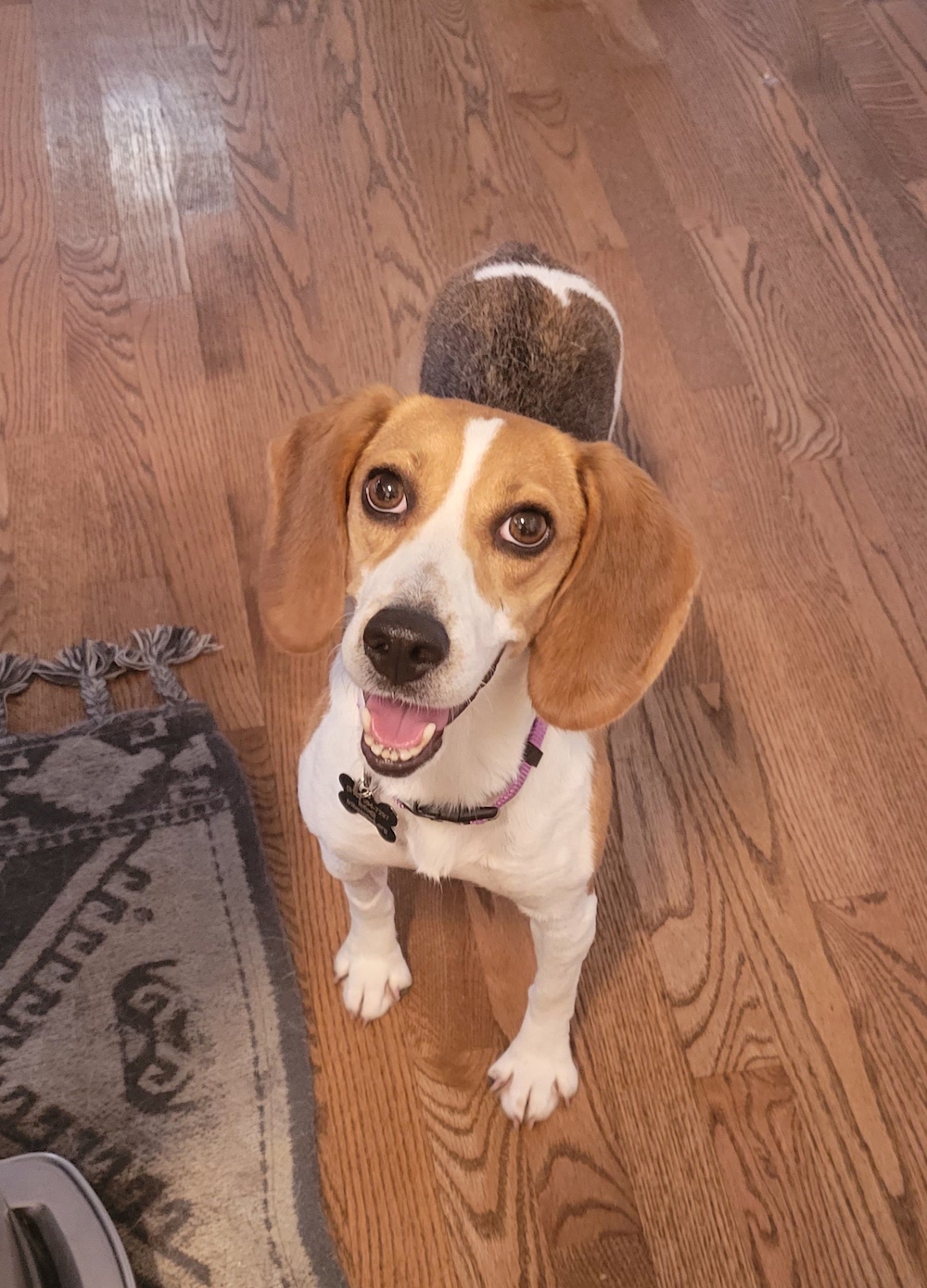 Where to get one of the rescued beagles

The Humane Society of the United States has a list of shelters and rescues that are helping to place the dogs. If you want to foster or adopt one of them, ask an organization near you about their procedures for vetting humans and placing dogs. Be kind and patient—Tenbusch says that her all-volunteer outfit has been inundated with so many applications that, at one point, their website crashed. They’ve had to pause processing them for now until they find permanent homes for some of the beagles who are living with their foster families.

These beagles look very cute, and their story has gotten a lot of attention. It’s only natural that many people want to take care of them. But if you decide that one of them is not right for you—or if you’re unable to adopt one—don’t forget that there are many more dogs who need good homes. “All of the shelters and rescues have other deserving dogs, too,” says Tenbusch, “and I don’t want those to be overlooked.” 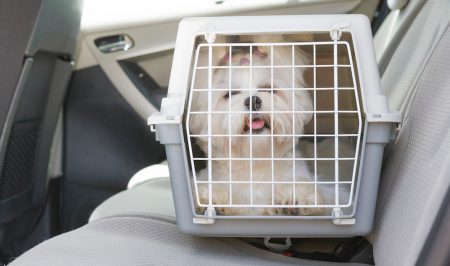 How to Make a Disaster Plan for Your Dog

If you’re prepared, you stand a better chance of keeping yourself and your dogs...

With help from experts, we delve into what we know about how dogs' minds... 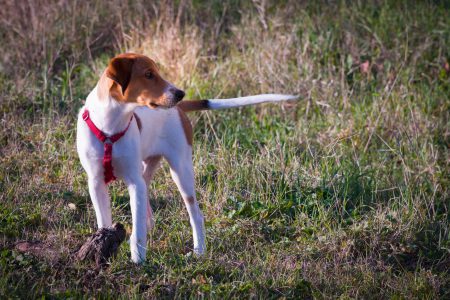 For such a seemingly simple appendage, a dog’s tail does a lot of complex... 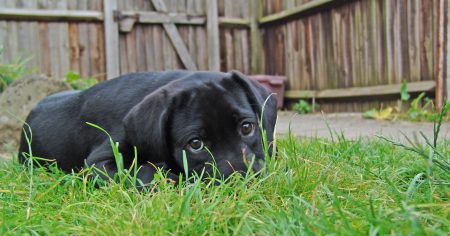 No One Is Talking About This: The Puppy Blues

After you've come through the trials of raising a puppy and you're in full...