Introducing Your Dog to a Cat 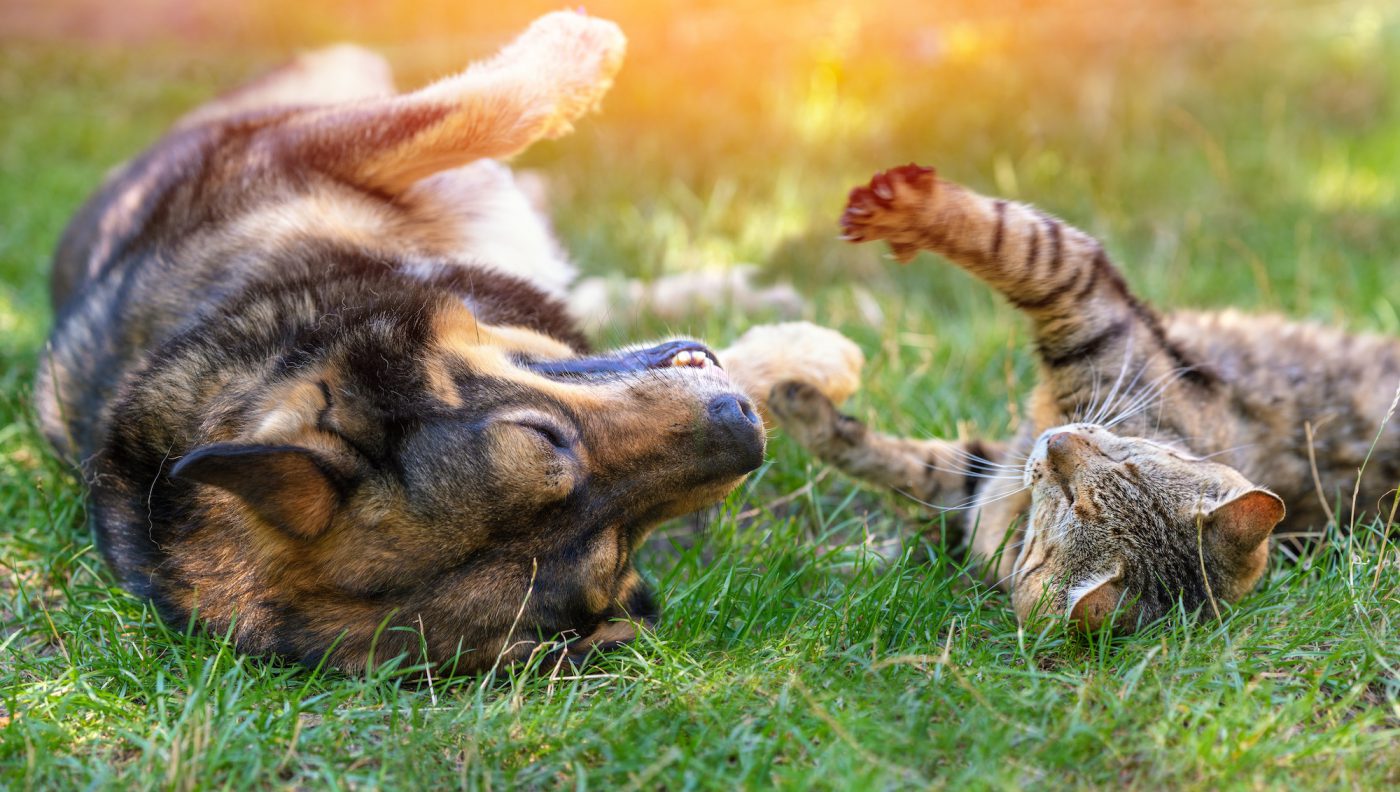 Omar, the dog, and Foxy, the cat, became fast friends when we adopted Foxy from a local shelter a few years back.

I brought the then 5-month-old kitten into the apartment in a carrier, let her out, and she walked around as if she had always lived here. Omar, then a 4-year-old mini goldendoodle, was lounging on his bed in the living room and was like, “Hey, cool to see you” as she waltzed by him on her way over to the couch.

There was no adjustment period. It was like they had lived together all their lives. Within a few days, Foxy was cuddling up against Omar, and they were grooming each other. If there was a soundtrack to those early days, it would have definitely been “Endless Love.”

I realize this easy, blissful commingling of lives isn’t the norm when you bring a cat into a dog-only household.

Years ago, when we brought a 1-year-old cat named Charlotte into a home that was then occupied by Chico, an 11-year-old schnoodle, it was a disaster. All Chico wanted to do was chase Charlotte, and she was terrified of him.

My wife and I were totally unprepared for the chaotic start to their relationship and quickly consulted with a trainer. It took a few weeks of work, but we finally got to the point where Chico and Charlotte could be in the same room, and while they were never as lovey-dovey as Omar and Foxy are, eventually they became friends.

If you have read this far, chances are you are a dog owner who is thinking of adding a cat to your family.

I consulted with Sara Du Bouchet, a CPDT-KA certified trainer and owner and senior manager of Tully’s Training in Los Angeles, to find out how to introduce a cat and a dog so that they can have the best chance of living together happily ever after. Here are her tips.

Before you bring a cat into your home, see what you can find out about that cat’s history with dogs. “If you’re getting the cat from a rescue or a shelter, they may have information about whether that cat is even a good candidate to live with other animals,” Du Bouchet says. “You want to make sure you take that information into account.”

In our case, we learned from the shelter director that Foxy had a fondness for dogs. It also helped that she was a kitten. Younger animals tend to be more accepting. 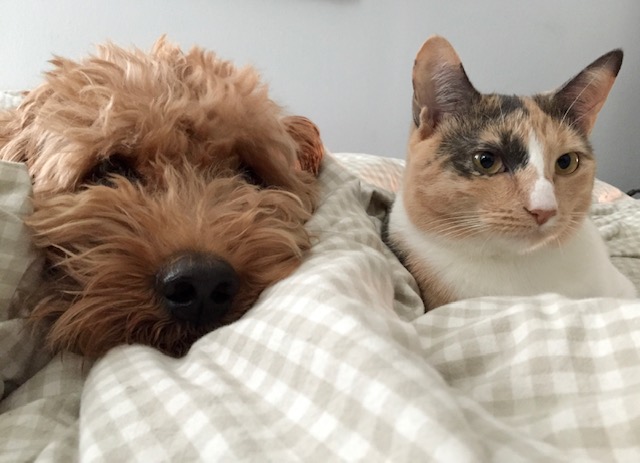 Omar and Foxy: It was meant to be

And how is your dog with cats? “If your dog has a high prey drive and likes to chase things, think twice before getting a cat,” Du Bouchet says.

That said, if you really want a cat, it is possible you can make the relationship work, she adds. “I would recommend in that situation to get the advice of a trainer before you bring the cat home so you are set up from day one to know what to do,” she says. “First impressions mean a lot, and if you are prepared, and you know how to introduce them to begin with, that can go a long way.”

We knew we had an advantage with Omar because he doesn’t have a high prey drive, or really any prey drive at all, and he had happily lived with a cat before he lived with Foxy.

Another tip: You also want to think about the age and energy level of each pet before you set them up for cohabitation. “To be fair to that animal and give them the best shot at a good life, you wouldn’t want to maybe bring a senior cat home with a young dog because that might be torturous for both of them,” Du Bouchet says.

Set up a meet-and-greet if possible

It is definitely worthwhile to have the cat and dog meet before you commit to making them roommates. “If that’s an option, I would say, take it,” Du Bouchet says. “It’s not necessarily going to be the same [as being in the same home] if it’s neutral ground. They might act a bit differently with each other. But I think you can at least get an idea if they can be around each other, and that can be super valuable.”

We were fortunate enough to have the opportunity to bring Omar to the shelter to meet Foxy in a controlled environment to see how they would interact (actually, the shelter director required that we do so).

Foxy was a little nervous at that initial meeting, which was held in an empty exam room, and Omar didn’t pay much attention to her. It wasn’t love at first sight. It was more like an awkward first date. But there wasn’t any hissing from Foxy or growling from Omar. We saw they could be in the same room together.

Don’t rush into too much togetherness

In most cases, especially when the pets have never met before, you don’t want to simply throw them together, which is the mistake we made with Charlotte and Chico.

Rather, you want to ease them into meeting each other and sharing space.

The newer animal resident needs some decompression time from wherever they’ve come from. “So, you might even want to give the cat some time to themselves before you even start introducing them,” Du Bouchet says.

That’s easy enough to do. Just keep the cat in one designated room with a closed door and access to food and a litter pan for a few days while they adjust to their new surroundings.

Once the cat gets more comfortable, you can start to let the pets see each other. Du Bouchet recommends using baby gates or exercise pens. Both provide a barrier and some protection “so they can get to know each other without the pressure of having to interact until both of them are ready,” she says. 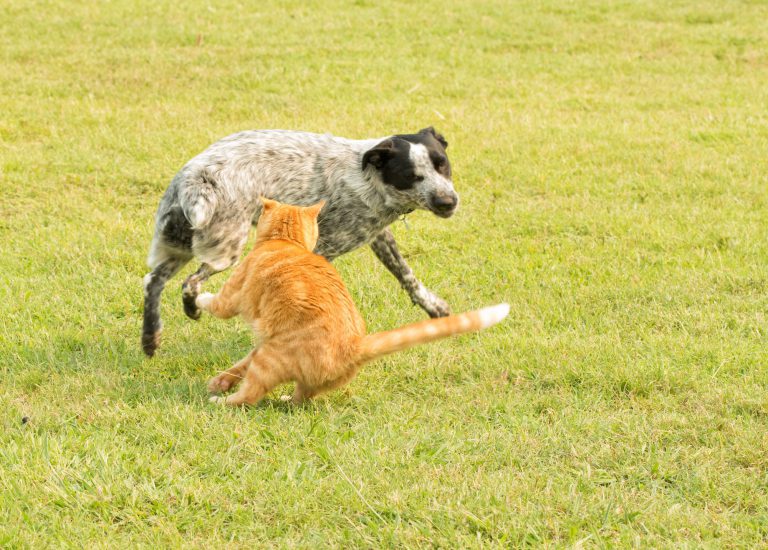 It’s not important who started it

One thing to stress: It’s best not to let your dog chase the cat. Yes, that’s going to be a challenge in many cases. “Chasing cats is a really natural species-specific behavior for a lot of dogs, and it’s not really fair to expect them to all of a sudden just like like, ‘well, this is what my brain and my body are telling me to do, but for some reason I’m supposed to make a different choice.’ So, at first, you need to try and prevent it from happening,” Du Bouchet says.

This is another reason why working with a trainer is a good idea.

Du Bouchet recommends working on the “leave it” skill. “Leave it” is one of the more important and versatile things you can teach your dog, so it’s worth stepping back and working on this skill until your dog can reliably hold back from things they have the instinct to eat, chase, or grab. This is a multi-step process that starts with enclosing treats in your hand and rewarding your dog with another treat when they stop trying to pry it away from you. As you teach the skill, work up to presenting your dog with enticing items on the ground while they’re on a leash. At each stage, offer a high-value treat when they don’t grab the “prey,” and instead focus on you.

Come together (over treats)

When you feel like the animals are calm enough, you can all sit together in a room at a distance. Keep your dog on a leash, and your cat, too, if they are harness trained. And reward them with high-value treats for being in one another’s company.

“That’s going to start to wire their brains so that they go, ‘Well, any time I am near Chico, I get tuna. This is great. I love Chico! And vice versa for Chico. Any time he is near the cat, he gets (a great treat), then he’s really going to like the cat,” Du Bouchet says.

Looking back, giving Charlotte and Chico treats together in the living room is when we began to turn the corner. They were both food motivated.

Know that the animals likely won’t be instant friends

How long do you need to work on creating a harmonious relationship between your cat and dog?

“I’m going to tell you something very unsatisfying,” Du Bouchet begins. “It depends. It depends on the personalities of the animals. It depends on how motivated they are to work with you. There are certain dog breeds out here that their job is to chase things. So if you have one of those dogs, it’s probably going to take longer because, as far as they have always known, that is what they are supposed to do with their life.” 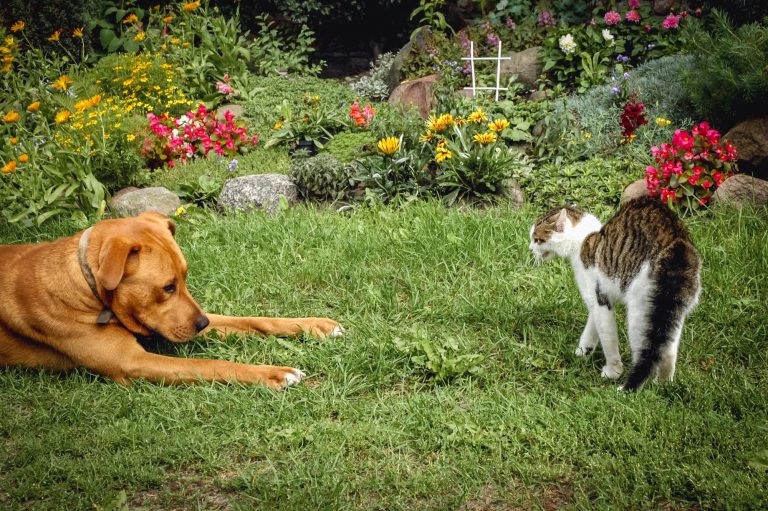 The rate of progress also depends on the consistency of the people involved in the training. “If we’re talking about two or three different people in the family, and they’re all doing something different—one person is really consistent with working with the dog, and the other two people just let it go because they really don’t feel like working on it—then it’s going to take longer,” she says.

But it’s not out of the realm of possibility that the animals could be living well together in a few weeks.

It’s worth the work you need to put in

Du Bouchet has a Lab named Moose and a cat named Thumbs, and she loves having a dog and a cat. It’s not just for her enjoyment; it’s good for them, too.

“Just from my own experience with my dog and cat, they definitely look for each other,” Du Bouchet says. “They’re buddies. I call them brothers. The cat will be asleep in his bed, and the dog will go over and lay down next to him to hang out. And I’ll catch them playing sometimes.

“The cat always looks horrified because it’s like he doesn’t want you to know that he actually likes the dog,” she adds.

My wife and I take great joy in seeing Omar and Foxy napping and playing together. As well as they get along, it’s not always perfect–if Omar licks Foxy’s ears too much, for instance, she will swat him. But, mostly, they enjoy each other’s company. We feel better when we go out knowing they have each other.

“Domestic dogs and cats are social animals in general,” Du Bouchet says, “and it adds a little icing on the cake when they get to have another animal that maybe kind of understands them more than we do.”