How to Stop a Puppy From Jumping Up 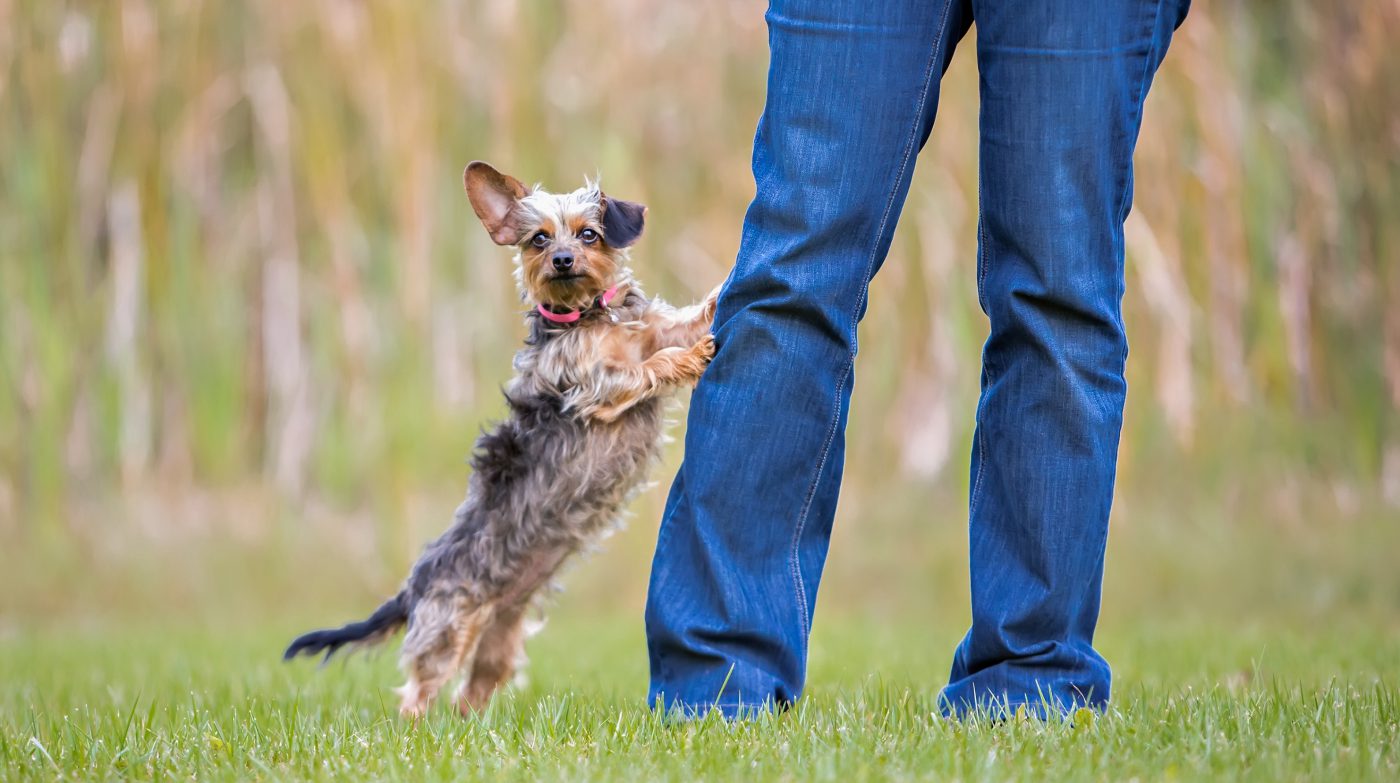 From the moment we bring our puppies home, they learn how to behave by watching our cues. They repeat behaviors they’re rewarded for, and before you know it, the little nips, whining, and jumping up for attention are more aggravating than adorable. Jumping up is a particularly bothersome habit that can lead to broken glasses, dirty clothes, miffed houseguests, and more.

Puppies jump up for attention, to grab something they want, to gather information, and, often, because their owners have (sometimes inadvertently) been encouraging it. Distilled into the simplest terms, puppies jump because they think they’ll be rewarded—and they usually are. So, to successfully train a dog not to jump up onto people, you need to teach them that there is no reward in jumping.

While it’s particularly important for owners of large breed dogs to stop this bad habit early—a jumping puppy becomes a 100-pound mass of energy before you know it—this is a skill that all owners should teach their dogs, no matter the size. Even the smallest dog can be a nuisance—and can present a risk to certain individuals, especially if they trip while trying to avoid being jumped on. As foreign as it may seem to dog lovers, not everybody wants a dog jumping all over them.

The sooner you teach your dog how to greet people in a way you deem appropriate, the better for you, your pup, and your guests.

As with most things in canine training and life, it’s helpful to note that every dog is different, and you may have to adapt the anti-jumping technique to your own dog. Some dogs can be discouraged by turning away and ignoring them, some dogs are more determined, and intrusive, jumpers.

You can experiment with different methods, but it’s important to be consistent in never rewarding your dog with attention for jumping up. Even yelling and making a production when your dog jumps at houseguests may be interpreted as a reward. Another thing to keep in mind: every time your dog successfully jumps up on someone, that behavior is being cemented. So, you want to try to prevent the action from happening as early, and often, as possible.

Here are some methods you can put into practice to stop your puppy from jumping up.

Puppies may be launching themselves at your friends’ faces because they want to greet them, but they could also be doing it out of sheer explosive energy. As with so many areas of your dog’s life, draining energy with mental and physical exercise can help. If you’ve got guests coming over to your home, for example, make sure your pup has had their walk, and maybe even engaged in a tiring game of fetch or other mental exercise beforehand. If the arrival of guests is a certain trigger for anxiety or over-excitement, try providing a toy like a treat-filled Kong or snuffle mat in an area away from the door to redirect attention until they’re a bit more calm and settled. 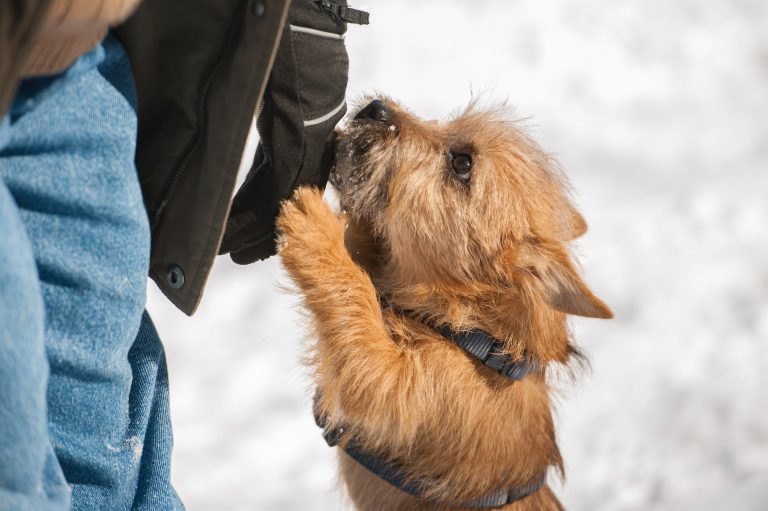 Turn away and ignore them

When puppies jump onto people, whether friend or stranger, they’re seeking attention, which is the reward for this behavior. Every time your puppy jumps up to say hello, turn your back toward them without saying anything and only turn back when they stop jumping. Turning away and only giving them attention when they stop jumping teaches them that there is no reward for jumping.

Consistency is essential if you’re going to use turning away to teach your puppy not to jump up. That means doing this every single time your dog jumps up, no matter what, and instructing all your friends to do the same.

While “turning away” works for some dogs, it may not be enough for a very determined dog who continues to experience over-excitement even after you’ve turned away. Further, this rule is hard to enforce in all situations, such as when guests who don’t know the rules come over or you meet people on the street. It’s not always possible to give detailed instructions on greeting your dog beforehand. In these situations, a more proactive method may help.

Some trainers recommend that you put a leash on your pup to manage greetings when people come to your door. When guests enter, allow your pup to approach and use the leash to redirect if any of their paws leave the floor. Once they have all four paws on the floor, sitting or standing, mark with a reward.

You can also practice this outside with a willing friend. Have your friend stand in one place while you approach them. If your pup starts bounding over and prepares to launch themselves at your friend, redirect them, gently correcting with the leash and getting their attention back on you and rewarding them for having all four paws on the ground.

Re-approach and repeat until your dog happily greets the person without leaving the ground where they will be rewarded with a treat and the chance to meet a new person.

When you’re getting ready to leave, feel free to calmly pet your dog goodbye a few minutes before you leave. Do not act sad or make a big deal out of leaving, which can exacerbate anxiety. Similarly, when you get home, ignore your dog for the first minute or so. If they jump on you, turn away from them and only acknowledge them when all four paws are on the ground.

This tactic has the added benefit of reducing the stress of separation: this tactic will teach them that coming and going isn’t such a big deal. (If you lament your departure and throw a party every time you come home, they’ll crave the dopamine rush of your return, which can exacerbate separation anxiety.) 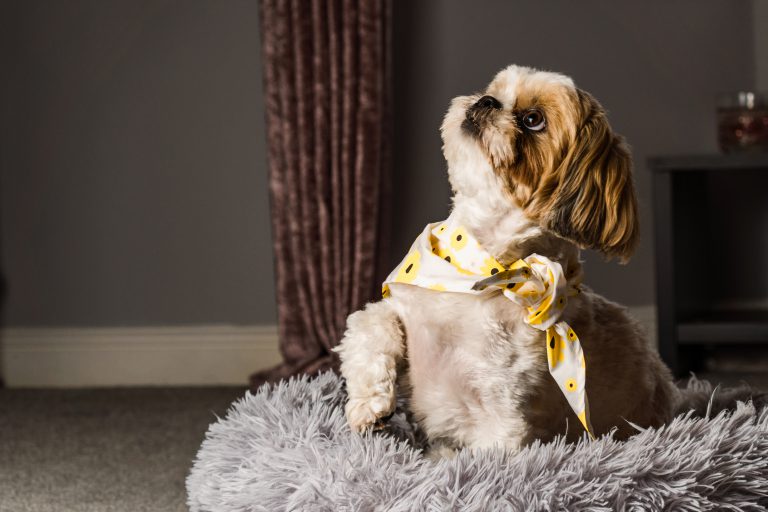 Teach your dog a different greeting

Dogs greet because, like humans, they’re excited to see people. So you can teach your dog how to greet in a less invasive (and less dangerous) way.

Rather than simply ignoring your dog, redirect their desire to greet guests. Redirection is one of the most powerful training tools a dog owner has in their arsenal. This way they get the praise and attention they’re craving, and they aren’t getting muddy paws on anyone’s white pants or knocking the glasses off of anyone’s face.

For example, train them to sit or lie down (you could even do this in a designated spot, like on their bed) every time someone comes or goes. Before doing this, your puppy needs to have a strong “sit” command, so practice making them sit before everything rewarding: going for walks, earning treats, playing games, and before meal times. The goal is to make “sit” an exciting command that, in their mind, always leads to good things.

Practice this again and again until they start sitting without being told. When they get to that point, you can start telling them to sit before a guest comes into the home, or, if you’re the one coming home, as soon as you walk in the door. Eventually, they’ll associate people walking through the door with the act of sitting and waiting.

Before you know it, you’ll have a well-adjusted, friendly pup to whom everyone from wobbly toddlers to people wearing expensive clothes will be happy to say hello. And what a lucky and loved pup that will be.