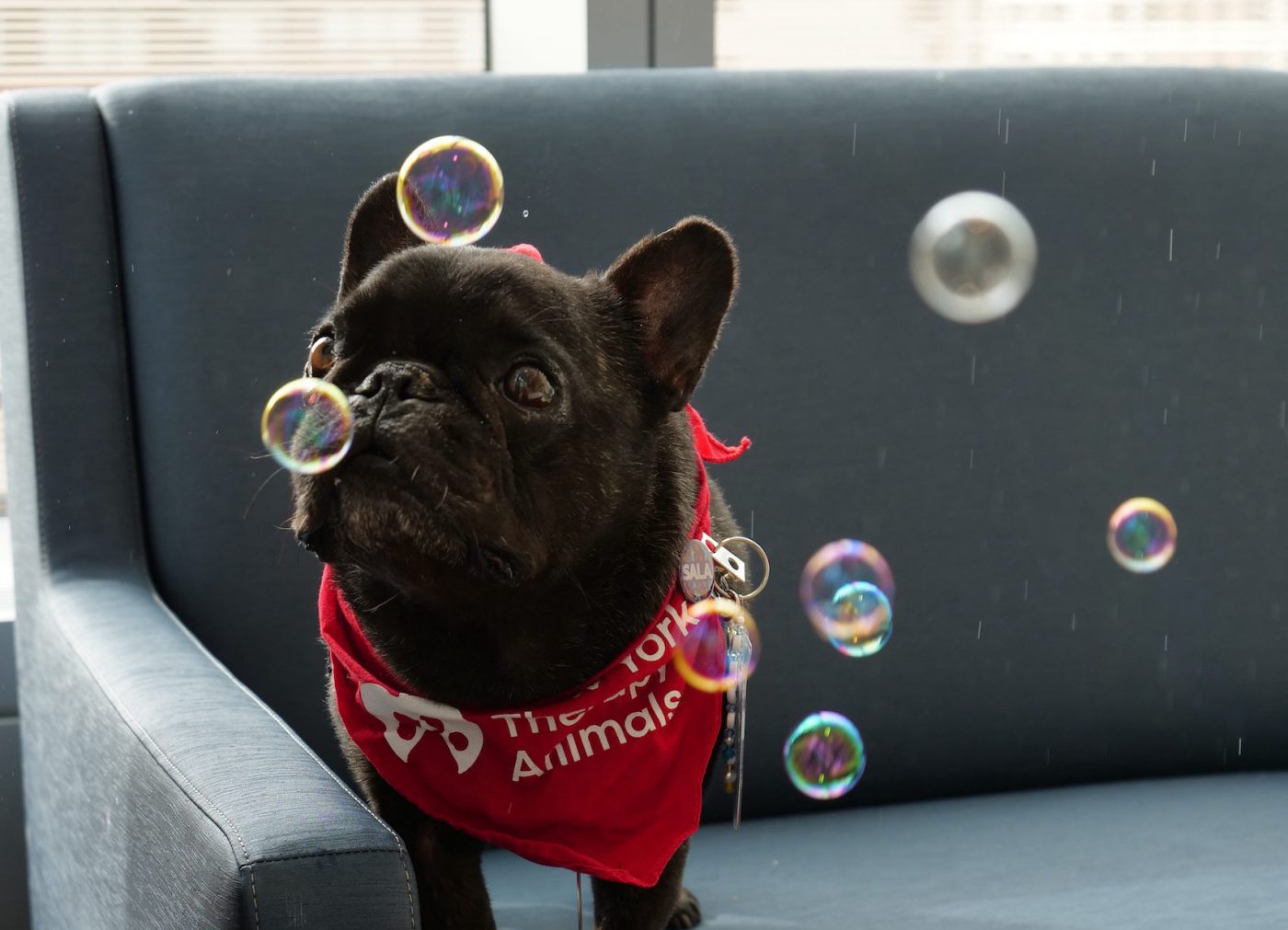 Gaston loves his job. When the 7-year-old French bulldog realizes it’s time to go to Hassenfeld Children’s Hospital at NYU Langone, where he works with patients, he can’t contain his joy.

“He has a very specific bag that we take for the hospital,” says his owner, Kristi Jones. This goes along with his uniform of a vest, a bandana, and an official-looking photo ID featuring his full name: Gaston Jones. “When he puts that on, I have never seen him so excited. He jumps in the air, he runs in these little donut circles, and you can tell he’s enthusiastically ready to go to therapy.”

The feeling is mutual; Gaston’s co-workers are always glad to see him, too. When the nurses at Hassenfeld hear the telltale sounds of their canine colleague’s approach—the clicking of his claws on the floor and the snorting of his nose—they gather at their station to greet him. 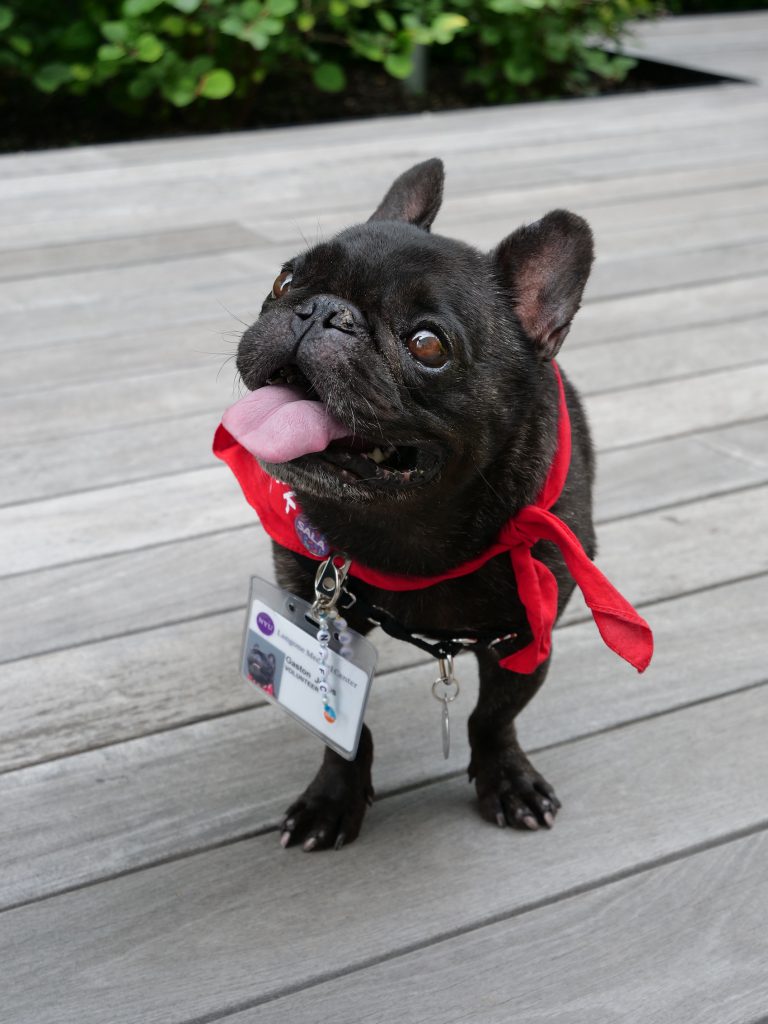 A day at the office

Gaston—named for the Disney villain with whom he shares a thick neck but differs in size and temperament—is part of a therapy team with Jones, a science teacher.

Together, they’ve worked in a wide range of settings—including Hassenfeld, the site of his main gig. The hospital’s pet therapy program includes dogs of all breeds and sizes, all of whom help alleviate patients’ stress and help them heal.

Research has shown an array of benefits to pet therapy, and anecdotal evidence suggests that Gaston has delivered them in massive quantities. For patients at Hassenfeld who are dealing with the challenges of illness and treatment, Jones says, Gaston “gives them a break to just focus all their energy on something else that’s cute and funny.”

“It changes the whole mood in the room,” says Chris Brown, Director of Therapeutic Recreation, Child Life & Creative Arts Therapies at Hassenfeld. “For the patient, of course—but also for their family, and for the staff as well.” Jones notes that patients’ parents will often “tell us about all of their dogs and the dogs that they used to have, and how much it means to them that we’re there.”

“We’ve come in and had what I consider just a typical visit,” Jones says, including “some laughs, petting—a very normal time for us. But then we would leave the room, and the nurses would say ‘that’s the first time we’ve ever seen that kid smile or laugh.’”

In-person visits are on hold right now due to the COVID pandemic, but Jones looks forward to returning this fall. “Gaston needs his time to have that sense of purpose, I think,” she says, “and to get back out into being able to interact with people.” 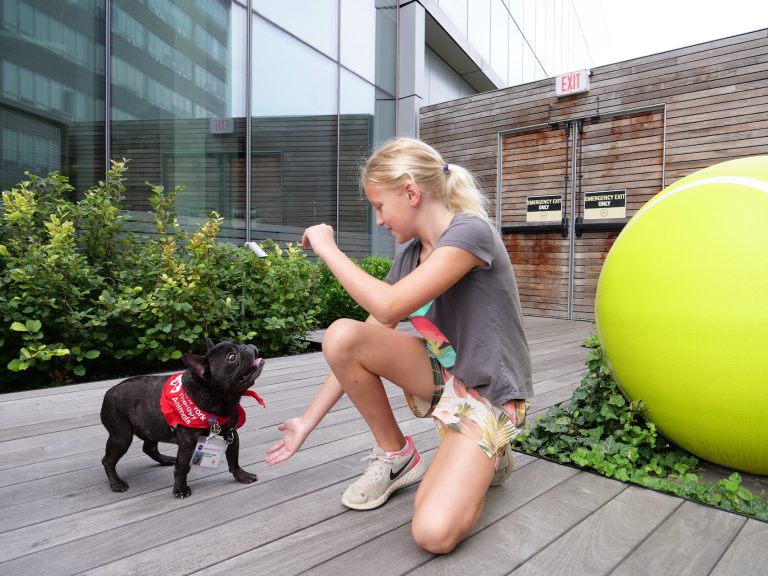 How he got the gig

Jones says that Gaston has “always had a zest for life, if you will, but didn’t have consistent ways to express that.” Knowing that her dog sometimes got lonely when she left for school and social gatherings, she thought therapy might be a good way to schedule more quality time while helping others. But becoming a therapy dog isn’t as simple as just showing up where people might want to pet a dog (most places). There’s a certification process to make sure the dog and human handler can conduct themselves safely and helpfully in the environments where they’ll provide those services.

“Just because your dog is good with you,” Jones says, “doesn’t make them a good therapy dog.” To get ready to work, she and Gaston trained with New York Therapy Animals, an organization that prepares dogs and handlers to volunteer in spaces that could include a lot of new stimuli and distractions. After seven weeks of training, there’s an evaluation that Jones likens to “a little obstacle course.”

“They go through all of the scenarios,” Jones says. “You have to walk across the room where the dog isn’t pulling the leash, isn’t sniffing the ground behind you, and is keeping pace with you. They pretend to make a loud noise on one side of the room and see how the dog reacts. They push a wheelchair past, they have a plate of food or something.” If you’re a human being who works in an office and has seen what happens when someone announces that there’s leftover pizza in a kitchen, you know how much food can disrupt employees’ focus. Any dog who can withstand that temptation is a pro. And don’t worry about whether Gaston is keeping his skills sharp—he’s due to be re-evaluated later this year.

Whether your dog is suited to be a therapy animal or not, you may be able to improve their life by introducing a structured activity that’s a fit for them. For some dogs, that might be therapy—for others, it might involve following a scent, agility, carrying objects, or going running. The important thing is to make sure that your dog has a healthy outlet for their talents and energy. 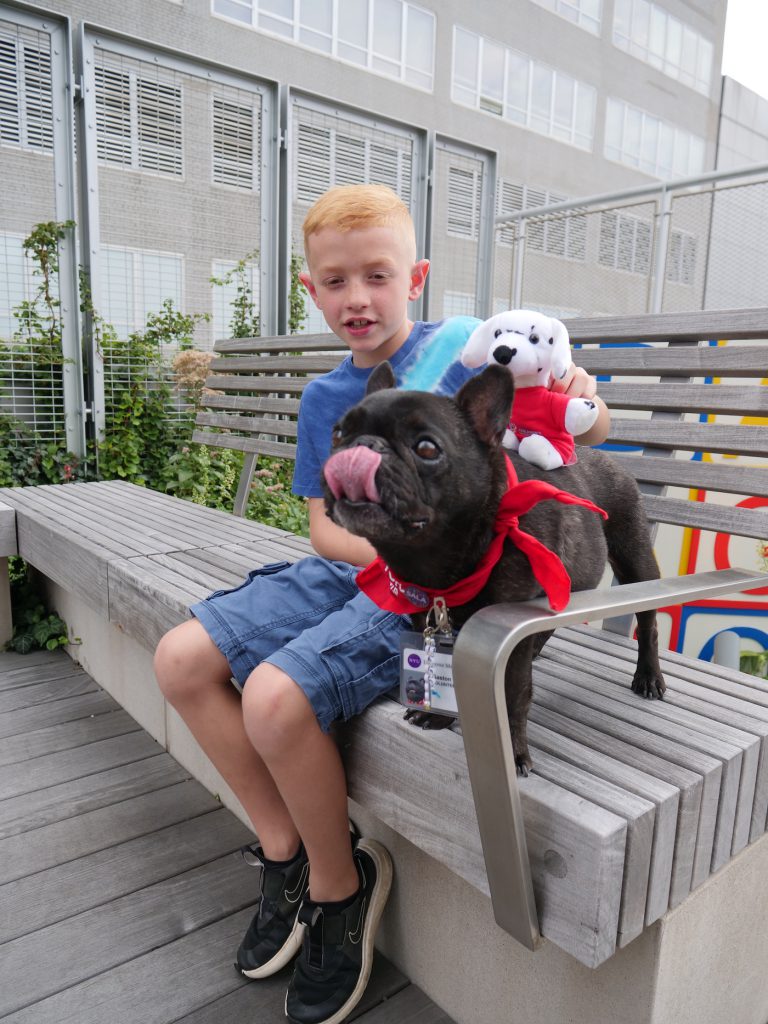 In the program, while Gaston learned to keep his mind on the task at hand, Jones learned how to communicate with and look out for him; the handler and the dog are called a “therapy team” for a reason.

Part of Jones’s job is looking out for Gaston. “I look a lot at his body language” during sessions, she says. “If the patient isn’t as gentle with their touch, or maybe they’re a little more erratic,” she explains, “what I’ll do is just come and pick [Gaston] up, keep the mood the same. I try to stay calm the whole time so that he knows that everything is okay. And then instead of him being on the hospital bed or on the sofa next to the patient, I’ll just hold Gaston and kind of lean in a little bit so that the patient can pet him. And if he’s having a day and he’s just not into it, I’m quite happy to be like, ‘you know what? I think we hit our limit.’ And that was one thing that we learned in the training. Not everybody has good days every day and there are times where your dog may just be over it.” Research confirms that this is a good approach; therapy dogs in one study tended to enjoy their work, and the authors suggested that handlers could help ensure that this would be the case by acting like Jones and seeking out situations that make their dogs happy.

Gaston is among the millions of Americans who’ve tried remote work at times during the pandemic. Jones reports that his stamina isn’t as great onscreen. “The time that he can sit in front of the monitor is max 30 minutes,” she says. 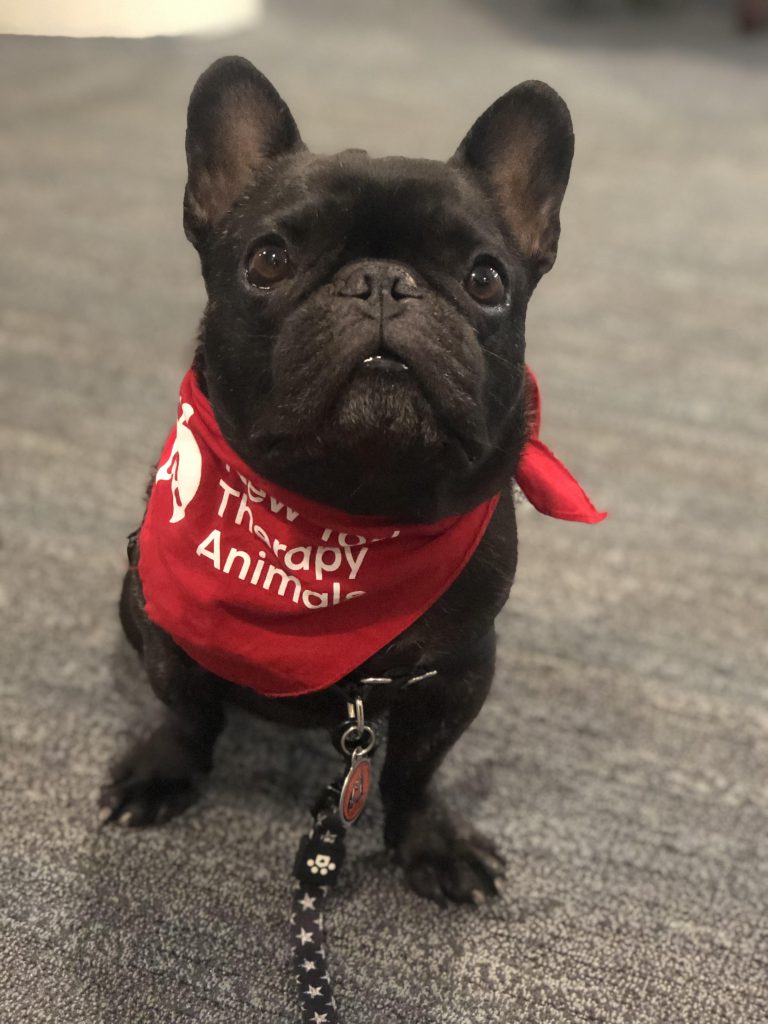 The end of a long day

Like many humans who enjoy their work, Gaston nevertheless gets exhausted after a productive shift. “After he’s had a long day at work, he comes home, gets in his bed, and passes out,” Jones says. “Nothing will wake him up.” But a week later—as soon as a well-rested Gaston catches a glimpse of his uniform—he’ll run in circles again, ready to return to the grind.