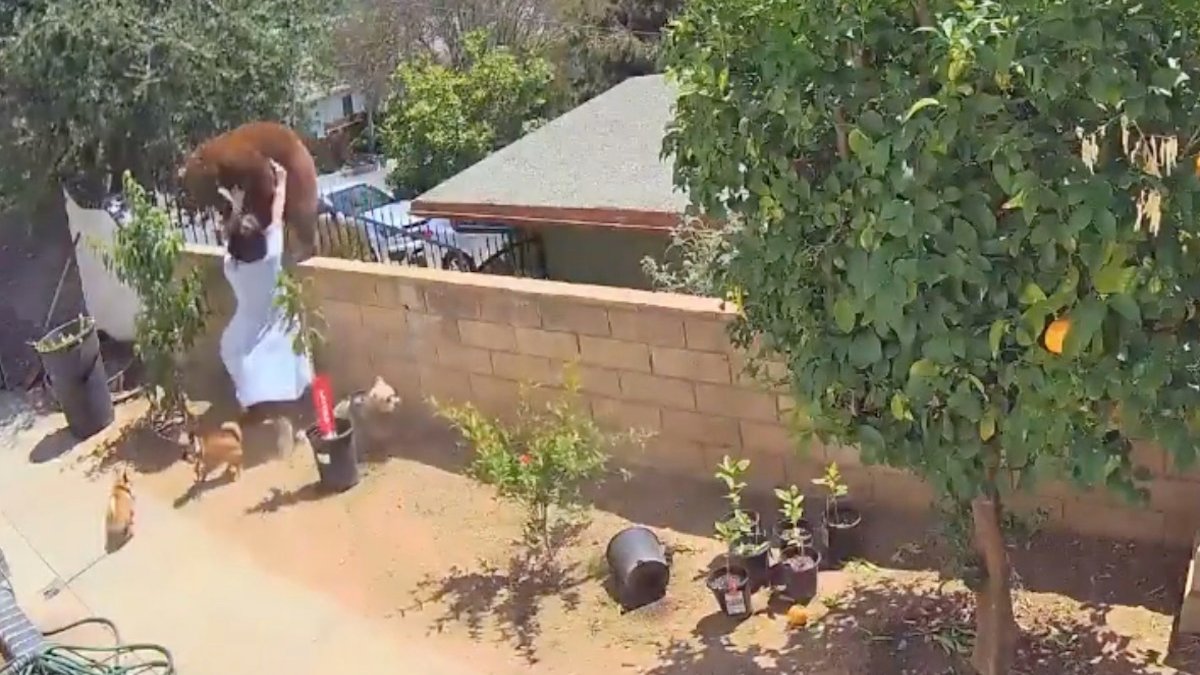 There’s a lot of news in a given year. Most of it is bad. Dog news, on the other hand, is always welcome in our feeds. Here’s a roundup of the most amazing, interesting dog-driven news and happenings of 2021.

A Woman Shoves a Bear to Save Her Dogs

It was the viral video that made every dog owner step back and contemplate just how far they’d go for their four-legged friend. And it’s the kind of incident for which the expression “don’t try this at home” was created. A 17-year-old California woman rushed to her backyard to find a bear on top of a brick wall swatting at her dogs. As noted in news coverage, she initially thought her dogs were barking at other dogs. But when she ran to see what was happening, she saw an adult bear (who had been walking along the wall with her cubs) swatting at one of her small dogs.  “I see the bear, it’s grabbing my dog, Valentina, and I have to run over there. She’s a baby,” the young hero told the local news. “And the first thing I think to do is push the bear. And somehow it worked.”

How To Tell If Your Dog Is a Genius

“Fast mapping,” or the ability to learn new word after very limited exposure is seen in young children, and this rapid acquisition of words has been thought to be a very human capability. In 2021, a series of studies showed that certain “gifted” dogs were better than others at rapidly learning the names of new objects. European researchers tested a group a group of dogs and found that these fast learners had “exceptional abilities” when it came to learning the names of newly introduced toys. Border collie fans will be interested to note that the top performers were all this notoriously intelligent breed (but it should also be noted that border collies are inclined to perform this kind of task, and some collies in the study were among those who didn’t learn any words!). As one researcher said in a statement: “We are intrigued by this extreme inter-individual variation in a cognitive trait (the capacity to learn object labels), and we think that this is just the beginning of a journey that will lead us to better understand the roots of talent—i.e., why some individuals, humans or other species, are gifted in a given field.”

And this is one you CAN try at home; the methods used by the researchers were fairly simple to replicate if you think your pup has a way with words…

The Science on Your Dog’s Adorable Tilting Head

It’s one of the most endearing things that our dogs do when they’re trying to understand us. And new research indicates that that’s exactly what they’re probably doing. After observing dogs who were told to go fetch specific toys, researchers wrote that the familiar head-tilt could be a sign that canines are paying attention. This 2021 study published in Animal Cognition concluded that head-tilting was associated with intelligence. Researchers tested 40 dogs divided into two groups—one group was made up of dogs considered “gifted word learners” (see above—those who had demonstrated exceptional ability to learn the names of toys), while the other dogs were more typical learners. The dogs underwent a 3-month training program to learn the words of new toys. The results: the “gifted” dogs were significantly more likely to tilt their heads when they heard the name of a new toy—they tilted 43% of the time versus just 2% of the time for the other group.

Bunny the sheepadoodle became famous this year for being able to “talk” to her owner by pawing at buttons on a soundboard that correspond to English words, like “walk,” and “outside.” The story struck a nerve as it provides a real glimpse of every dog owner’s dream—being able to really communicate with their canine friend—coming true. Bunny’s owner even seemed to indicate that the talkative pup was moving quickly from everyday requests for food and play to more existential queries, at one point “asking” the question, “what dog is?” Can Bunny really talk? Is she really contemplating the nature of being? That’s not something we can answer here. We do know that teaching your dog games like this is a great form of mental exercise, so we say: let them speak!

Ancient People Loved Their Dogs, Too

The remains of pets buried at what could be the world’s oldest pet cemetery showed that many dogs died old and infirm, and had to have been cared for (and dare we say loved) by their owners.