30 Mistakes the “Seinfeld” Humans Make with Farfel in “The Dog”

October 9 brings a momentous anniversary for Seinfeld: 30 years since the premiere of “The Dog,” the episode whose title is closest to the name of our company. In the episode, Jerry is charged with taking care of a dog named Farfel after his owner, Gavin—the man sitting next to Jerry on an airplane—falls ill.

In honor of the anniversary, and the show’s arrival on Netflix, we decided to highlight 30 ways the humans of Seinfeld fail to look out for the best interests of the episode’s titular character.

1. Jerry dismisses the value of the human-dog bond.

When Gavin says “You’re missing out on a relationship that could enrich your life in ways that you never could have thought possible,” Jerry responds: “How about picking up their… you know. You find that enriching?” Aside from the fact that picking up dog poop is, in our opinion, not that bad—a conscientious thing to do, easy work, and a little humbling—Jerry should know that there’s a lot more to owning a dog than disposing of their waste. Considering he has dachshunds in his own home, we suspect real-life Jerry is more enlightened than his character in this respect.

2. Gavin asks Jerry, whom he has just met, to take care of his dog while he’s in the hospital.

No one wants to think about bad things happening, but it’s best to make arrangements for your dog’s well-being so that qualified people who care can look after them at times when you can’t. We don’t recommend handing your dog over to a stranger if you have any other options. 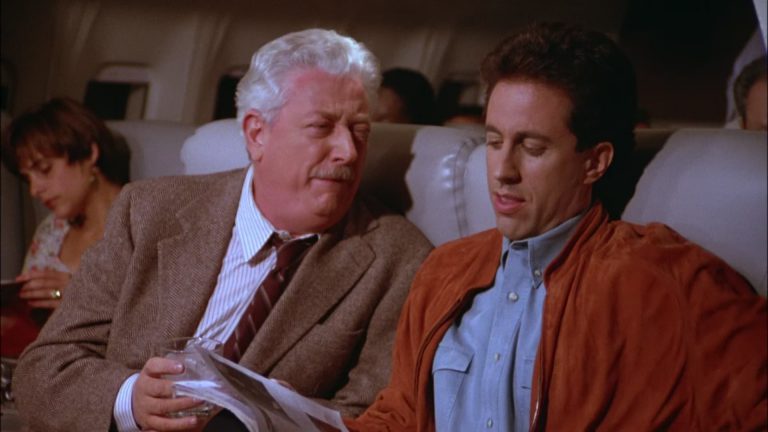 3. When Jerry expresses hesitation about assuming responsibility for Farfel, Gavin says “I’m sure it’s only for a day or two.”

When you’re talking about something as important as who looks after your dog, you don’t want to pressure a person who’s not interested in taking on the job. You have to find someone who loves dogs and will do their best to make sure yours has a good experience.

4. Jerry tries to retrieve his shoe from Farfel in what seems to the dog like a game of tug-of-war.

Back in Apartment 5A, Jerry shows that he hasn’t done much dog-training research. He’d be better off finding a way to reward behavior he wants than trying to pull his shoe out of Farfel’s mouth. Sometimes this strategy can be dangerous—and often a dog will enjoy the “game” you seem to be playing. It’s too bad that our article on teaching your dog “leave it” did not exist in 1991.

5. Jerry yells “give me that, you stupid idiot” at Farfel.

This is mean and unhelpful. Dogs are intelligent creatures—possibly more than we give them credit for. When a dog isn’t behaving the way we want them to, it’s likely due to boredom, fear, or lack of boundaries and training.

6. Jerry yells “shut up!” In an effort to curb Farfel’s barking.

Observant thinkers have noted that many a Seinfeld plot would’ve turned out differently if Jerry had internet access. If he’d read our guide to curbing excessive barking, we have to believe that Jerry would have employed more effective methods than shouting “shut up” at a barking dog, who is liable to interpret such an utterance as “barking back.” That could make the barking worse.

Again, Farfel’s undesirable behavior is not evidence of lacking intelligence, but lack of training.

8. Trying to get Jerry to come see Prognosis Negative in the movie theater despite his fears that Farfel will go to the bathroom in his house, Elaine asks: “Can’t you just put some newspapers down or something?”

Inviting a dog to leave a collection of poo-and-pee-soaked periodicals around your home is not the best way to handle bathroom accidents—for them or for you. With patience, you can potty train a puppy or an adult dog who needs it. Fun fact: Prognosis Negative is the name of an actual screenplay written by Seinfeld co-creator Larry David. It was never produced.

9. George, too, asks about putting down the newspapers.

While we can’t smell Farfel’s breath through the screen, we know that any foul oral odors couldn’t be his fault. Gavin should have instituted a toothbrushing routine and given Farfel enjoyable chews. And if Jerry may look after Farfel for a long time, he should start acclimating him to toothbrushing.

11. In a standup interstitial, Jerry calls picking up dog poop “the lowest function of life.”

Incorrect. Good citizens should and do clean up after their dogs. This is more a mistake about general human-dog relations than one specifically relating to Farfel, but it turns out 30 mistakes is a lot to find in a 22-minute episode.  Also see #1.

12. In the same bit, Jerry says: “If aliens are watching this through telescopes, they’re gonna think the dogs are the leaders. If you see two life forms, one of them’s making a poop, the other one’s carrying it for him, who would you assume was in charge?”

Jerry is assuming a lot of things about aliens. How can he know the way aliens would perceive poop? If they’ve never encountered it before, extraterrestrials could be fascinated by dogs’ poop and believe that it has a certain value. Maybe they would regard humans as “stealing” poop from our furry friends. It’s by no means inevitable that they would believe the dogs were in charge, even though they should be.

13. Jerry yells “bad dog” at Farfel because of his continued bathroom issues.

No dogs are bad, and yelling at your dog for an accident is not the way to train it out of them.

14. A desperate Jerry tells Farfel: “I’ll give you money! How much?”

While dogs may enjoy many goods and services that can be purchased with money by humans, there is no evidence that they have any use for cash—or that they even understand the concept of it. Jerry would be better off trying to motivate Farfel with a high-value treat or belly rub.

15. Gavin does not leave a phone number or address with the hospital after he leaves.

When Jerry calls, he can’t locate Gavin. While we understand that he is facing a medical issue, he has to be more responsible about the dog that depends on him.

16. At the first sign of difficulty tracking down Gavin, Jerry starts threatening to send Farfel to the pound.

This is draconian. Getting a dog, or even temporarily looking after one, is a commitment. Even if a dog isn’t behaving the way you’d like, it’s up to you to have some patience. Also, Farfel does not understand verbal threats and cannot, as Jerry suggests, “start packing up [his] little squeeze toys” unless he’s been trained in an intricate sequence of tasks—which, given how inadequate his basic training is, seems highly unlikely.

17. Jerry, defending his insensitive behavior toward Farfel, says: “I like dogs. I’m not sure this is a dog.”

Farfel is a dog. Suggesting that he may not be could be Jerry’s way of trying to rationalize his own actions.

18. Confronted with the possibility that Farfel could die if he’s surrendered to the pound and not claimed, Jerry responds with “how late are they open?” Also on the subject of the pound, he sings a song of his own composition: “Going to the dog pound, everybody/Going to the dog pound/come on down.”

This is awfully callous.

19. Jerry, getting ready to go to the pound, tells the dog: “Okay, Farfel, put your shoes on.”

While in some cases you’d want to protect a dog’s feet with shoes, there’s no way Farfel knows how to put them on himself. There’s also no evidence that Jerry has provided him with approved canine footwear. 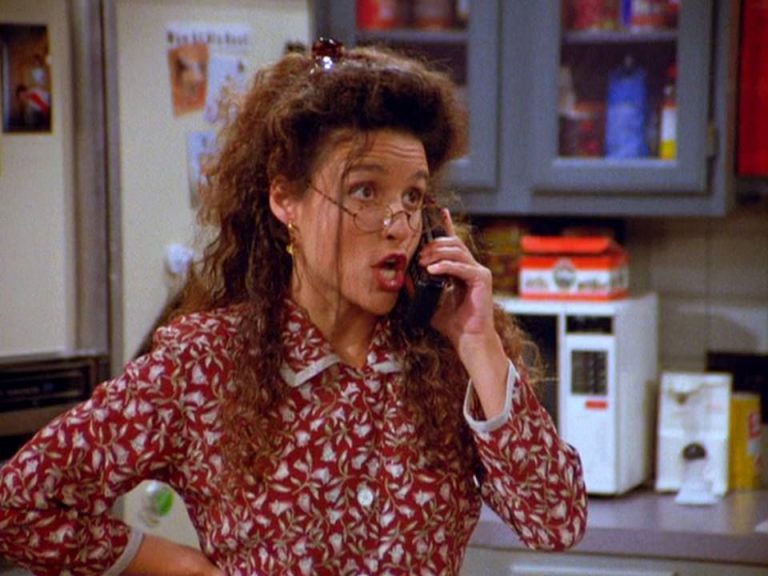 20. Elaine, requesting that Farfel get a reprieve, only asks if Jerry can give him “one more day.”

21. When he hears that Elaine will stay behind to watch Farfel instead of going to the movies, George is disappointed and asks: “What is with this dog? I thought we were taking it to the pound.”

Elaine is right to look after the dog. Dogs are animals with feelings, and do not exist for humans’ convenience. It’s fine to go have fun with other humans sometimes, but you have to make sure that your dog has plenty of company, exercise, and mental stimulation. Elaine is to be commended for making her best effort, and George should reconsider his selfish outlook.

22. Elaine tries to pull her jacket out of Farfel’s mouth, resulting in a game of tug-of-war

24. Gavin addresses Farfel by name when admonishing him for barking: “Quiet, Farfel!”

To a dog, their name basically just means “look at me.” If you want to teach a quiet command, you have to make a concerted effort to do so and not just assume that your dog will understand an English word that we know means to stop making noise. Based on Farfel’s behavior, he either does not understand the “quiet” command or is not focused or motivated enough to follow it.

25. When Kramer expresses discomfort at Farfel’s jumping on him, Gavin says “he won’t hurt you; he’s just playing.”

While this may be true, dogs must be trained to respect boundaries—not everyone wants to play with them, and they should be disciplined enough to sit still and respect the wishes of even people who inexplicably don’t like pups. We’ve got some tips for eliminating jumping behavior.

Mutts, or mixed-breed dogs, are wonderful. On average, they also may have some health advantages over purebred dogs due to genetic factors.

27. Gavin doesn’t listen to criticisms of his dog training or the provisions he made for Farfel’s care.

Instead, he cuts Jerry off and predicts that he’ll be asking to visit Farfel soon, which Jerry says is very unlikely.

28. As they leave Jerry’s apartment, Gavin lets Farfel pull him on leash.

He should employ methods to help train his pal to walk calmly on leash, which would result in better walks for dog and human alike.

29. Jerry says that a parakeet was “the only pet that [he] really enjoyed.”

We have nothing against parakeets—but, if true, this is wrong. Dogs are better.

30. In a deleted scene, Kramer reveals that he fed “Turkish taffy” to Farfel

Dogs should never eat taffy, which could seriously harm them. For more information on what dogs should and shouldn’t eat, check out our “Can my dog eat___?” series.

Seinfeld is now streaming on Netflix.