Can My Dog Eat Fish and Seafood? 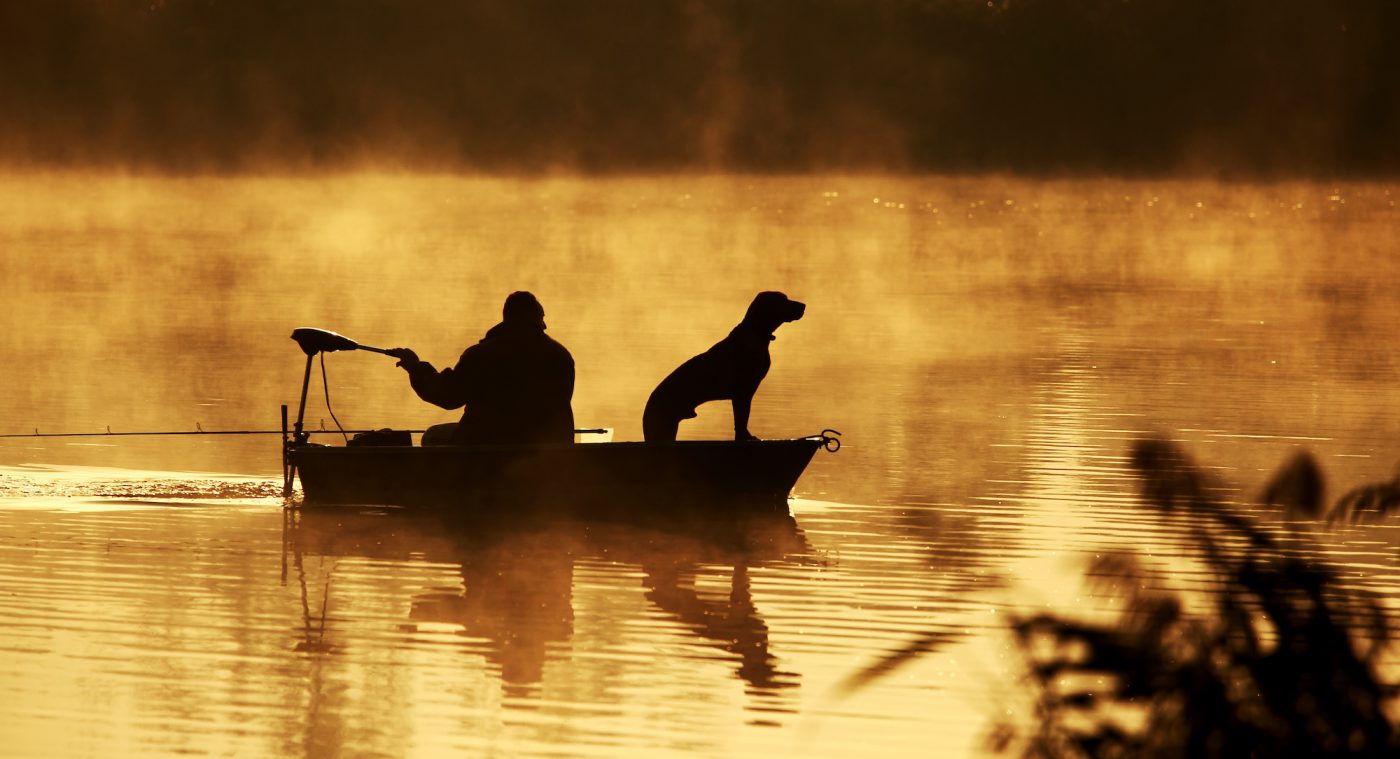 As a source of low-fat protein, Omega-3 fatty acids, and other nutritional benefits, fish is generally considered a superfood for humans. Those benefits apply to dogs too, but don’t assume a favorite fish dish also works for your canine family member. Some types of fish and seafood are better for your pet than others, and many preparations are risky.

Read on for which fish are the best catch for your dog, and which to throw back (onto your own plate).

Salmon is a well-established favorite of nutritionists and foodies alike (and is the cornerstone of some dog food recipes). It’s a fish that earns its superfood reputation—it contains Omega-3 fatty acids, which are shown to reduce inflammation and cardiovascular disease risk and to improve immunity and canine coats. It’s also full of other beneficial nutrients including vitamins A, B, and D, plus zinc and calcium. Salmon is high in protein and many dogs find it delicious, which is especially helpful if your dog is a picky eater or sensitive to other meat.

There’s a big condition for feeding salmon, though: For dogs, salmon must be thoroughly cooked—the USDA says to hit 145 degrees—because the raw flesh can host potentially fatal parasites. One causes Salmon Poisoning Disease, which affects only dogs and their wild cousins. As the name implies, the disease is primarily caused by raw salmon, but trout, steelhead, and Pacific salamanders can also transmit it.

The culprit is actually a microorganism called Neorickettsia helminthoeca that lives in the salmon parasite Nanophyetus salmincola (so it’s not the parasite that’s dangerous, it’s the parasite’s parasite). And while this danger was thought to be confined to salmon in the Pacific Northwest, from San Francisco to Alaska,  researchers in Oregon recently discovered a bacterial risk for salmon anywhere in the world.

Salmon poisoning is serious for dogs. Signs include vomiting, loss of appetite, diarrhea, and weakness. The infection can be successfully treated if you get veterinary attention in time, so contact your vet immediately if you suspect your dog has eaten raw salmon. Dogs that do not receive treatment can succumb quickly; 90% of untreated dogs will die of salmon poisoning.

Again, cooking salmon properly kills parasites and bacteria. If you want to give your dog salmon, cook it simply with no oil, onions, or seasonings.

As with any food, if you’re serving salmon, be mindful of serving size—factor it into your dog’s overall caloric intake. If it’s an extra, serve no more than once a week, in portions no more than 100 grams per 10 pounds of body weight. Salmon skin treats can also be healthy in moderation.

And as with all fish, mind the bones—remove them or serve water-packed canned fish. 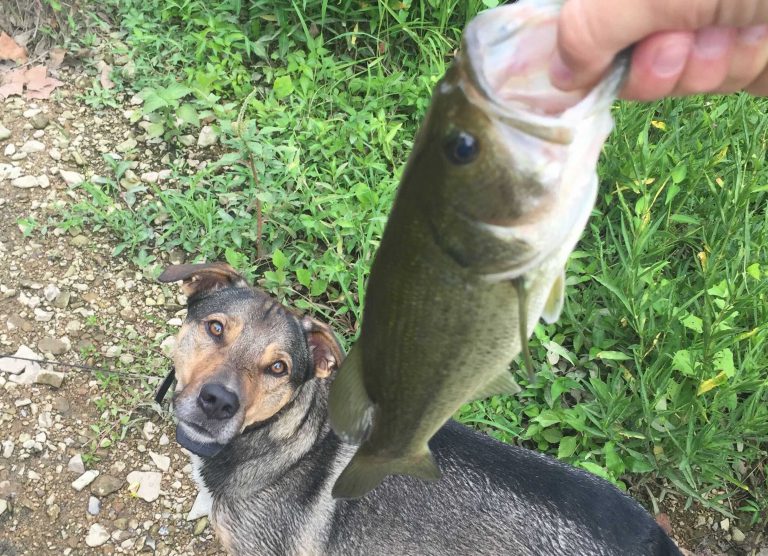 Yes, but it’s not the best choice.

On the plus side, tuna’s nutritional benefits are ample. The flesh of this cold-water fish contains Omega-3 fatty acids which support heart and brain health, and immunity, plus vitamin D for skeletal health and selenium to boost disease prevention. And canned tuna has more protein (and less fat) per ounce than chicken.

But there are some significant downsides to tuna that you may have heard about. Long-living, large fish accumulate more toxins, and with some species exceeding 15 years and 550 pounds, tuna is a concern. High levels of mercury, in particular, are linked with many health problems including hair loss, anxiety, poor coordination and kidney damage. Because small bodies are more susceptible to mercury poisoning, we, and many other experts advise against feeding tuna to dogs with any regularity, especially to tiny breeds. There are also ecological reasons to give tuna a pass.

While tuna is technically safe to eat in small amounts if cooked (with no oil, salt or spices), we advise against feeding it more than very occasionally. If you are going to give your dog the occasional tuna treat, as a rule, canned tuna labeled “light” or “skipjack” contains less mercury than other kinds; also, choose water-packed and low-sodium. As with salmon, raw tuna is a no-go.

For a  better, oily-fish alternative to tuna, may we suggest… 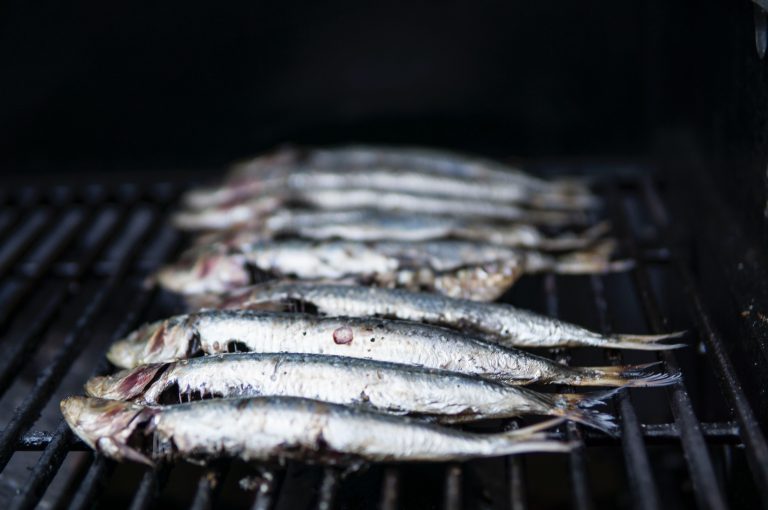 Both sardines and anchovies are safe for dogs to eat and can offer them health benefits. These fish provide high levels of healthy Omega-3 fatty acids which include eicosapentaenoic acid (EPA) and docosahexaenoic acid (DHA), which can improve the quality and condition of your dog’s coat and skin, decrease inflammation, and support heart, brain, and joint health.

Anchovies and sardines are also a source of high-quality protein that’s sustainable and low mercury as they’re lower on the food chain than bigger fish (they feed on plankton, not on other fish).

If you’re feeding a fresh, balanced diet that contains high quality Omega-3 fatty acids, you shouldn’t need to feed your dog additional fish. But, if you want to give your dog the occasional healthy treat, or if your vet has recommended they get supplemental Omega-3s from fish sources to treat arthritis or other conditions, sardines and anchovies are an excellent choice.

Feed them in moderation. One anchovy has about eight calories. Smaller dogs can safely consume two to three anchovies as an occasional treat, while larger dogs can eat up to five.

When feeding canned sardines, you can feed all the parts of the fish, including the bones (which help supply calcium) One 3.75-oz can of sardines packed in water is about 100 calories. For smaller dogs, think a quarter or half a tin as an occasional treat or meal topper, while larger dogs can have up to one tin. Remember to factor these extra snacks into your dog’s overall calorie intake.

Shrimp, lobster and other shelled sea creatures can add a touch of variety to a dog’s diet, but they’re best enjoyed only occasionally. Although shrimp and lobster contain useful vitamins and minerals and are low in fat and toxins, they lean high in cholesterol and sodium.

As with all extras or new additions to your dog’s diet, start small—offer just a small piece of shrimp or lobster. Be alert for possible adverse or allergic reactions. And if it’s tolerated, you can offer your dog the occasional shrimp, or hunk of lobster or crab as a meal topper. Remember that even though shellfish can be a healthy treat in moderation, your dog doesn’t need it if they’re eating a healthy, fresh diet, and too much can contribute to weight gain and nutritional imbalance. Shrimp labeling can sometimes be unreliable; if you’re not sure where it comes from, or if it’s not from a trusted source, it’s best to skip it.

As for oysters and other mollusks, keep the raw treats to yourself and only serve them cooked (and without toppings).

Follow these general guidelines for shellfish as food for dogs:

If you define sushi as raw fish served with specially prepared rice, the answer is: it’s best to steer clear. It’s not a good idea to feed raw fish to your dog. You risk bacterial contamination and parasites. Yes, if you’re going to a good restaurant, the fish is high-quality and should be safe—hey you’re eating it! But there are too many unknowns. As noted, raw salmon can contain a parasite that doesn’t harm humans, but is extremely dangerous for dogs. Don’t take the chance of feeding it to your pet.

Sushi traditionally contains short-grain white rice with a splash of vinegar, both of which are safe for dogs. A layer of seaweed, or nori, is also appropriate provided it’s low-sodium and small enough to go down easily. So, if you’ve got a roll with vegetables and rice, you could give your dog a taste, provided it was free of extra spices or soy sauce (which is another no-go for dogs as it contains too much sodium). But then, that’s not really sushi anymore, is it?

Overall, fish and seafood can be nutritious additions to a dog’s diet when properly prepared and served in moderation. Salmon stands above because this superfood can be a staple source of healthy protein and nutrients.

Salmon aside, if you think of the “best” seafood as simply the safest seafood, then there are some general guidelines to follow, and they can be applied to your dog’s diet as well as your own:

Opt for smaller fish with a shorter lifespan: These fish that are closer to the bottom of the food chain are less likely to have accumulated a lot of heavy metals and toxins in their flesh. They’re also a more environmentally friendly choice.

Watch for bones: Fish that have brittle bones that are hard to clean out of the flesh are riskier for your dog to eat. Bones can pose a choking hazard and can damage your dog’s mouth, throat, and intestines.

Avoid drastic changes to your pet’s diet and, as always, make sure if you’re feeding fish as extra, feed sparingly so you’re not risking weight gain or nutritional imbalance.

Pet health is an important topic. That’s why The Farmer’s Dog editorial team carefully vets and reviews every piece of content we publish. We deliver evidence-based advice and medically reviewed facts that focus on pet nutrition, health, and well-being. The mission of this site is to help people provide the best care possible for their dogs by publishing only trustworthy, accurate, and timely health information from a group of passionate experts.