Why Does My Dog Eat (and Roll in) Grass? 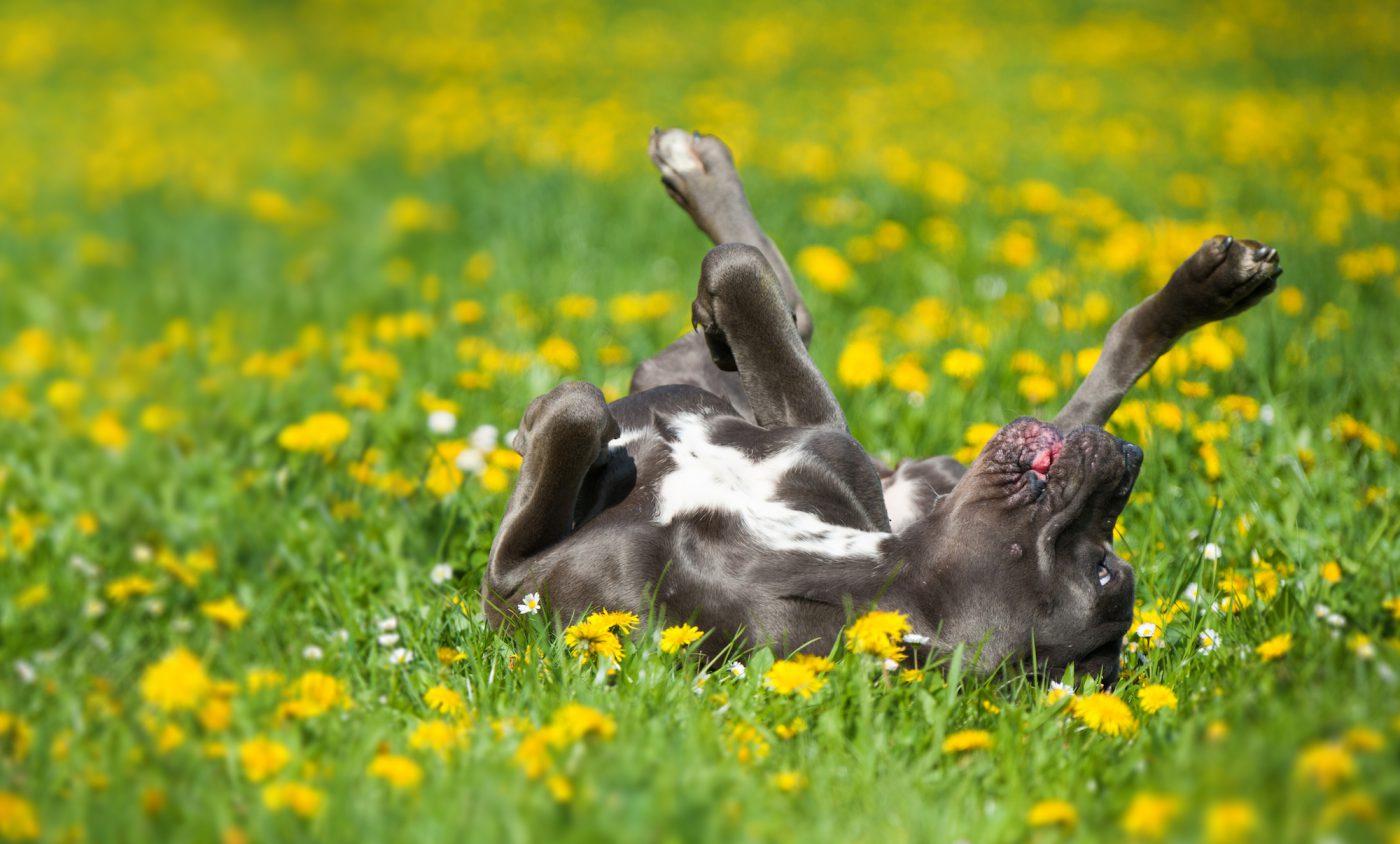 Who doesn’t love a walk in the grass? It’s a pleasant pastime that both people and dogs can enjoy. But sometimes dogs take their love of grass to another level, by rolling in, or even chowing down on it. And for some dogs, rolling in the grass isn’t complete unless there’s also an extremely aromatic substance involved, like poop, or a dead animal.

Grass-eating in dogs is extremely common. But why do they turn to this decidedly non-traditional food source?

When dogs compulsively eat things that aren’t typically considered food, it’s called pica. And while there are no conclusive answers to the age-old mystery of grass-eating, there are some theories, some more sound than others.

Eating grass due to lack of plant nutrients

One school of thought holds that grass eating is a vestigial behavior that comes from dogs’ ancestors: since wolves consume whole animals they regularly ingested the plant material in their prey’s stomach. So, according to this theory, dogs have an instinctual drive to eat this sort of thing from time to time.

Relatedly, it’s thought that dogs who eat grass or houseplants may be lacking chlorophyll or other plant-based nutrients or fiber from their regular diets (it should be noted, though, that dogs who eat balanced diets that contain plants have also been observed eating grass). Dogs can’t properly digest grass, so it’s not really providing much in the way of nutrients (so it shouldn’t be thought of as a “healthy” habit). If you suspect that your dog isn’t getting enough plants in their bowl (for example, if they eat kibble), start incorporating fresh snacks like green beans into their diet, in moderation. You can also add a small amount of fresh herbs and cooked vegetables to your dog’s regular meals, or switch to a fresh dog food that contains fresh, gently cooked vegetables, which is ideal for providing plant nutrients in a digestible form. 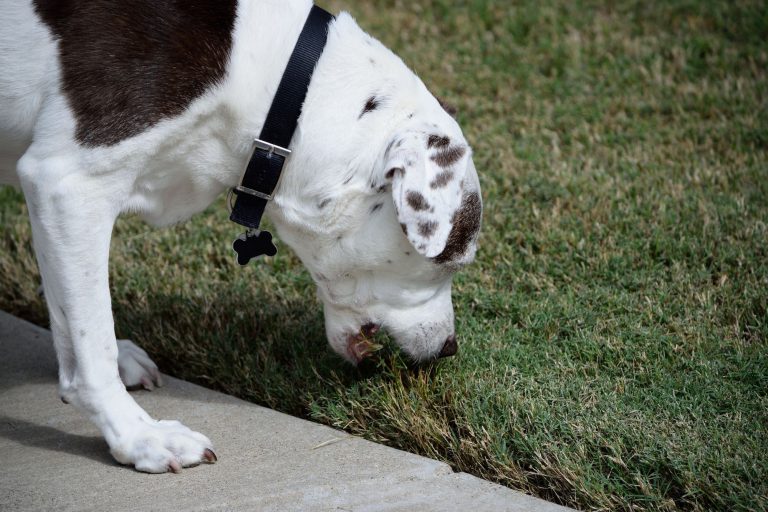 Another popular theory is that dogs eat grass to help with upset stomach or gas. Eating grass can induce vomiting, but one study of 1,500 dogs conducted by UC Davis in 2008 found that while 79% of dogs were reported to have eaten grass, only 9% were reported to appear ill beforehand, and only 22% vomited afterwards.

In some cases, dogs may well be eating grass to help self-soothe gastrointestinal issues. It’s always worth a trip to the vet if your dog is exhibiting signs like lethargy, diarrhea, stomach pain, or weight loss in conjunction with grass snacking as it may indicate a gastrointestinal ailment.

Even if they’re already eating a healthy diet and their plant-nutrient needs are being met, there’s a chance that some dogs just chomp on grass out of sheer boredom, the same way we sometimes snack when our hands or brains are idle. Lack of stimulation can be a cause of this compulsive pica. Is your dog getting enough exercise when you let them out in the backyard, or are they restless and under-stimulated and turning to eating grass to keep themselves entertained? Try playing fetch or tug, or taking your dog for a jog to tire them out before they plop down in the grass. And day to day, be sure that they’re getting enough exercise and some form of mental stimulation during the day. A rubber food toy stuffed with a low-calorie treat and frozen can provide mental exercise (read about exercise and “brain game” tips here).

While grass isn’t inherently dangerous, grass grazing can represent a health hazard due to the prevalence of pesticides, which can be toxic to dogs and have been linked to cancer. If your dog takes the odd bite of your own (pesticide-free) lawn, it’s not something to worry too much about. But try and keep them from eating grass anywhere else. 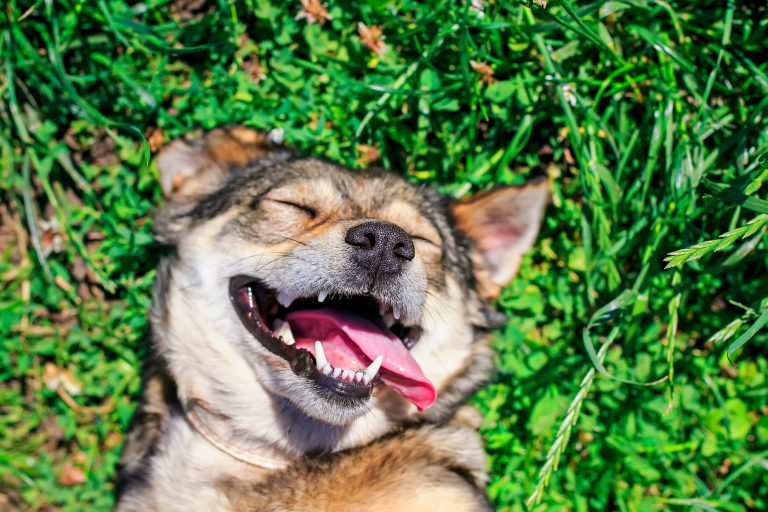 That feeling when you’re lying in poo

Rolling in the deep grass (and garbage)

It’s perhaps one of the least explicable behaviors we see in dogs— they’re walking along, shiny clean coat gleaming in the sun, when they suddenly take a dive into a pile of poop, a carcass, or other disgusting substance and commence rolling around as we look on in horror. Somewhat more explicably, they also may just delight in rolling around in grass with no pungent additives present.

There are a few other theories about why dogs roll in “dirty” things that are related to ancestral behavior.

One explanation is that rolling dogs may be picking up the strong odors of decaying animals or feces to mask their own odor, which would have been a helpful technique for hunting. If the dog (or wolf) is covered in poop or carrion (two odors very familiar to prey) they have a better chance of sneaking up on their quarry.

The other theory is that dogs like to deposit their own scent on things (has your dog ever rolled around like crazy on a new dog bed?), or to cover up the things WE think smell nice with things that they think smell better.

But rolling around in the grass or rolling in distasteful things on the ground can also just be considered a playful behavior—an expression of happiness or the equivalent of a good back scratch. “Grass, dirt and poop aren’t considered dirty or forbidden to dogs,” says Dr. Andrea Y. Tu, DVM, Medical Director of Behavior Vets of New York.

Stanley Coren, PhD., professor emeritus in the Department of Psychology at the University of British Columbia and author of multiple books on dog behavior including The Intelligence of Dogs has also suggested that this weird behavior is pure sensory stimulation, in this case, exercising your dog’s powerful olfactory sense. Dr. Coren writes, “I believe that the real reason that canines roll in obnoxious smelling organic manner is simply an expression of the same misbegotten sense of aesthetics that causes human beings to wear overly loud and colorful Hawaiian shirts.”

Conclusion: Remember that only YOU think shampoo and perfume smell good; your dog’s nose knows what it likes, and sometimes rolling around in that thing is the only way to scratch the itch.