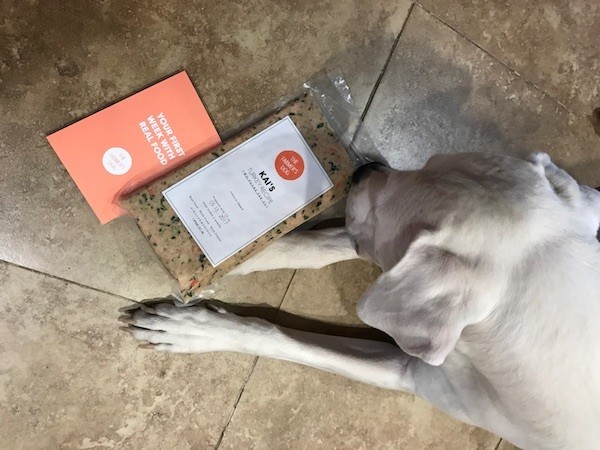 This article originally appeared on Livingly and was contributed by Deena Bustillo, Managing Editor.

I’m the first to admit that I’m a crazy dog mom — but it’s not 100% my fault. Kai, my 95-pound Dogo Argentino “lap dog” who thinks she’s the size of a chihuahua, has just about every allergy under the sun. No wheat or grains. Absolutely no chicken. Heck, it cost me $1,000 at the dog dermatologist to determine she’s also allergic to the sun. So, yeah, I’m a bit crazy, especially when we’re out and a well-intentioned, dog-loving person offers Kai a treat, which is bound to make her have diarrhea for a week — and/or give her a gnarly rash.

So, you can see why I jumped at the chance to try The Farmer’s Dog, a food delivery service for our four-legged friends that features real food (tested on humans!), created with board-certified veterinary nutritionists, and customized to fit individual dog’s needs. It’s great for all dogs, but especially the ones with those special dietary needs like Kai. And after I’ve switched her food countless times, I was so excited to try something new that didn’t involve randomly picking a new “hypo-allergenic” dog food off a shelf at the pet store.

Instead, here’s how The Farmer’s Dog works: You fill out an online questionnaire about your dog’s size, weight, activity level, protein preference (turkey, beef, or pork) etc., then you’ll get back a customized food plan that’s delivered to you every two weeks in pre-portioned packets. You keep 5 at a time in the fridge, and the rest in the freezer (you might have to clear out some of your frozen pizza stash to make room, but you’ll survive). Then you simply feed your pup one of the packets from the fridge at breakfast and one at dinner and you’re done! There’s no measuring or hassle. Kai could hardly contain herself when I received the first shipment of food and now that we’re 2 weeks into her new food regimen, there’s no way she’ll settle for kibble again.

Here are three awesome things that happened in the first two weeks of using The Farmer’s Dog:

1. My Dog’s Allergies Got SO Much Better

How do I know when Kai’s allergies are bad? The easiest sign is that the hair on her head gets splotchy (see photos below). Within a week of eating The Farmer’s Dog food, the area looked significantly better. She wasn’t itchy at all and the sensitive skin on her belly returned to the normal pink color, instead of reddish and irritated.

And TMI alert — her poop looked better than ever. Believe me, it’s easy to tell when you have a 95-pound dog.

The Farmer’s Dog food is made in human-grade kitchens and you won’t believe the difference in how it looks and smells compared to the stuff you’ve been feeding your dog. At this point, Kai is probably eating better than I am…

Day 1 of The Farmer’s Dog Day 7 of The Farmer’s Dog Kai already loved to eat, but she was next-level excited for mealtime these last few weeks. Even if she was sound asleep on the couch before dinner, all I had to do was walk to the fridge, take out a packet, and start to pour it in her bowl and she would spring into action — with a giant string of drool hanging out of her mouth as she waited. She never reacted like that to her previous kibble dinner. No way.

Some nights she’d even eat all of her food then return a few minutes later to her bowl and lick it again — just to make sure she hadn’t missed a piece.

3. I Felt Good About Feeding Her

After trying out The Farmer’s Dog, I realized I was a crazy and also lazy dog mom. After so many failed attempts at finding the right food for her allergy needs, I stuck with a kibble that was fine but not great. I didn’t really think there was anything better out there. She wasn’t itchy or in pain with her old food (I’m not that bad), but after seeing the improvement with The Farmer’s Dog, it was very apparent that there was something soo much better for her.

And, yes, let’s be honest: her new food plan is more expensive than her kibble (cost per week varies according to the size and needs of your dog, but plans start at about $29 a week), but my dog and her health are 100% worth it. I’ll eat out one fewer time a month or ditch that afternoon Starbucks and quickly find the extra money to keep my furry BFF happy and, most importantly, healthy.