How to Care for a Deaf Dog 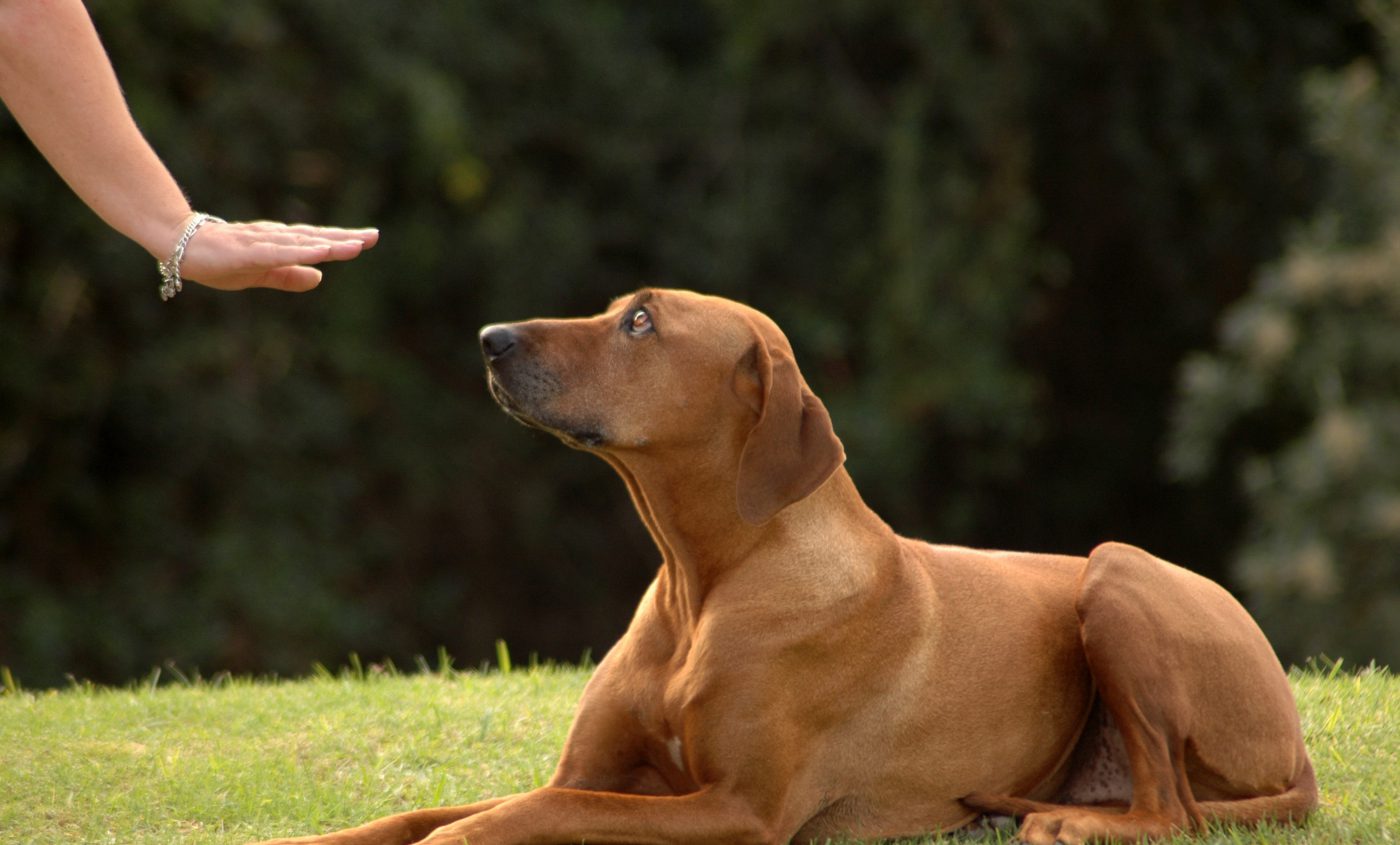 Deaf dogs can make excellent companions and have achieved great heights in fields like dog sports—but there are some extra steps their humans should take to keep them safe and happy.

If you have a deaf dog or are considering adopting one, here is some information to get you started.

Signs of hearing loss in a dog

Some dogs are born deaf, but others will lose their hearing later. In part because dogs are good at reading visual cues, it might not always be obvious right away if a dog has hearing loss. If you notice that your dog startles easily, shakes or tilts their head more than usual, isn’t responding to commands or seems not to be paying attention to you, test their hearing. Try making noises when your dog can’t see you—by whistling or squeaking a toy, for example—and gauge whether they seem to be reacting. If they’re not, you may want to contact a veterinarian. A veterinary neurologist may test a dog’s hearing using a Brainstem Auditory Evoked Response (BAER) test. 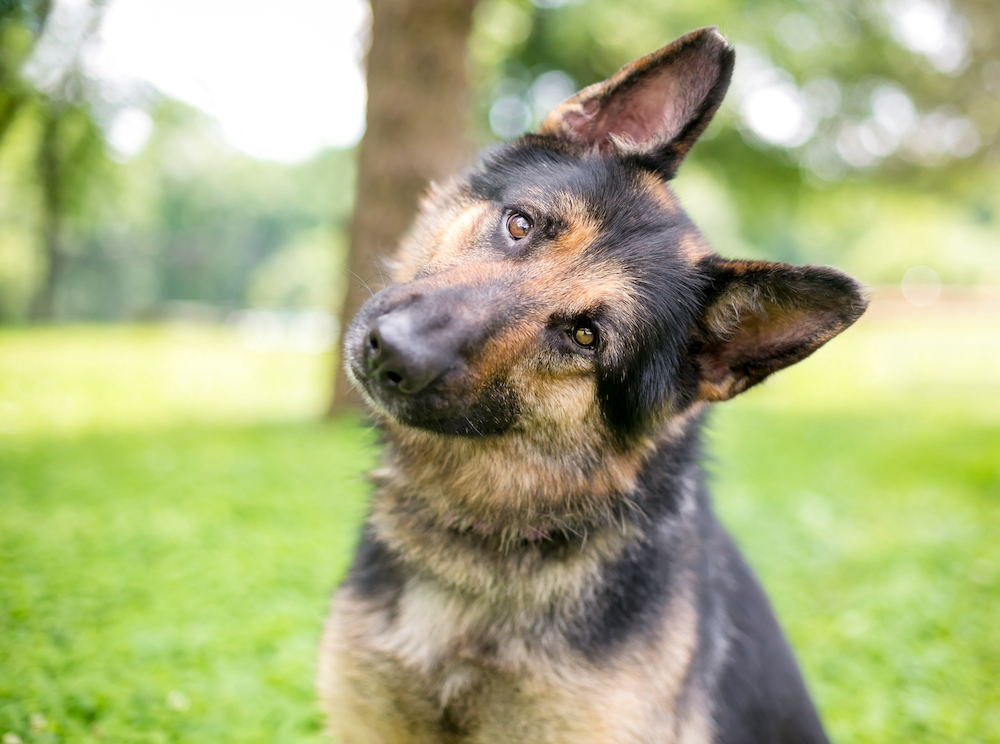 Causes of deafness in dogs

The most common cause of deafness in dogs is genetics. Dalmatians are famously predisposed to the condition, and the breed is one of many that are more likely to be deaf. According to Dr. George Strain of Louisiana State University, who has researched deafness in dogs extensively, congenital deafness is especially prevalent among dogs with white skin pigmentation, as well as those with roan, piebald, and merle coats.

Like humans, dogs can go deaf as they age, or because of exposure to loud noises. To protect your dog’s hearing, steer clear of cacophonies—and shield their ears with canine headphones if the sounds are unavoidable. Gunfire, fireworks, and live music are among the types of sound that can damage a dog’s hearing; if a person would need to avoid a situation or wear ear protection, chances are your dog does as well. If you’re at home and notice that your music or TV volume seems to be bothering your dog, turn it down.

Some dogs lose their hearing due to chronic ear infections, trauma, toxins, or ear medications. If you’re concerned about any of these, talk to your veterinarian. Your vet can also walk you through how to clean a dog’s ears regularly with a pet-friendly ear cleaner.

Deaf dogs benefit from training as much as those who can hear—but teaching them requires a different process, and some patience. “People [read] a lot about breed when they’re trying to decide how they want to train their dog,” says Denise Herman, founder and head trainer at Empire of the Dog in New York City. “[But] I would say that if your dog is deaf, that’s a way bigger consideration than your dog’s breed.” 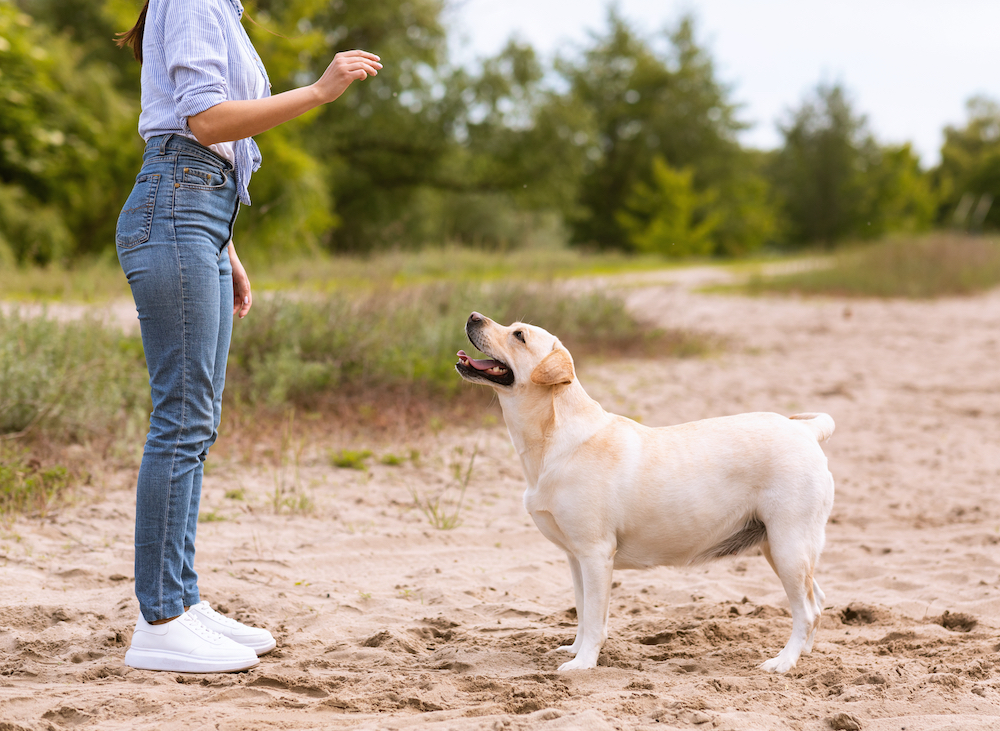 The principles of training a deaf dog are the same as training any other dog—but you won’t be able to use sound. Dogs can pick up on hand signals; in fact, even many owners of hearing dogs use hand signals as part of their training, especially considering that they can be a natural outgrowth of the lures used in training with treats. As when training other dogs, it’s important to be confident and consistent.

You can use any hand signals you want—something deriving from your lure, American Sign Language, or gestures you invent yourself—as long as your dog knows what they mean. Try to have everyone who’ll be communicating with the dog use the same signals.

If you’re transitioning from hand signals based on lures to another system, show your dog the new signal first and immediately follow it with the lure they’re used to. “You know that they’re linking” the two, Herman says, “when your dog starts to jump the gun when it sees the first signal.” This is the same process you’d use to add a verbal command with a hearing dog.

If you’re teaching a large number of commands, do your best to make your hand signals easy to differentiate. Herman gives the example of teaching her dog to spin counterclockwise and clockwise. Rather than simply reversing the direction her finger spins for the counterclockwise command, she uses a finger pointing down for the clockwise spin and a finger pointing up for the counterclockwise version. As a general rule: if a human being might have trouble telling the difference between two hand signals, you’ll probably want to make it easier to distinguish between them.

Feel free to keep talking to your dog during training, even if they can’t hear. Chances are that the facial expressions and body language you use in conjunction with the hand signals are making an impact, as dogs are skilled at reading and understanding human faces.

Whether or not your dog is deaf, it may be a good idea to incorporate hand signals into your dog’s training for situations when it could be difficult to hear—or in case, as happens with many older humans and dogs, your dog eventually experiences hearing loss.

A deaf dog will need to know basic commands like “sit,” “stay,” and “come,” and will need some way of knowing when they’ve successfully completed a task. However, your way of communicating these ideas to them will be different than they would be with a hearing dog.

The marker you use during training can’t be a word or the sound of a clicker, so come up with a marker hand signal or, if you’d prefer, some other visual cue. Herman mentions “a pen-light flashlight with like a ping pong ball on it” as an example of a sight-based substitute for a clicker. You may prefer giving a thumbs-up.

In addition to a marker, you should have a visual equivalent of praise, or the phrase “good dog.” Herman uses jazz hands, but anything can work. Just make sure that your dog associates it with praise, getting treats, getting petted, and other things they like.

There’s also the matter of your dog knowing when you’re asking them to come to you. If you’re in their line of sight, a hand signal will do—but, sometimes, they may not be able to see you. At those moments, you might need to get their attention by flashing lights or gently stomping on the floor to generate a vibration.

Certain companies make remote collars that generate a gentle vibration—which is not the same as an electric shock—and some owners use these to summon their dogs when they’re out of their visual field. Others, if they’re handy, rig up their own vibrating devices for this purpose. This is not necessary—the Deaf Dog Education Action Fund notes that it is just one available tool, and “many deaf dogs have been successfully and completely trained without one.” If you do opt for a vibrating collar, slowly acclimate your dog to the device. “You desensitize your dog to it in advance by having it lay next to them,” says Herman. She suggests starting with the collar in your own hand. “It vibrates and it earns them a treat,” she says. “Then you put on the sofa maybe next to them—they feel the vibration, they get a treat,” she continues. The idea is for your dog to associate the vibration with something good so that they’ll look at you when it goes off.

On the lower-tech side, you can use the leash to let your dog know to look back at you on a walk. “What I do sometimes even with hearing dogs,” says Herman, “is I teach them that if I jiggle the leash with my hands so that they feel a movement on their collar—not like pressure or jerking; I just juggle it back and forth—they look at me and they’re gonna get a treat.”

Be cautious about where and when to let your dog off leash. Near a road, for example, a deaf dog cannot hear an approaching vehicle.

Also consider that deaf dogs have fewer tools to judge the intentions of other dogs and humans. When they’re playing with other dogs, they won’t pick up growls, barks, and other signs that hearing pups can use alongside body language to determine how the interaction is going.

Children and dogs should always be supervised when playing together. Teach yours to respect the dog’s space and understand that there can be an increased risk of startling a deaf dog, who could then bite them. 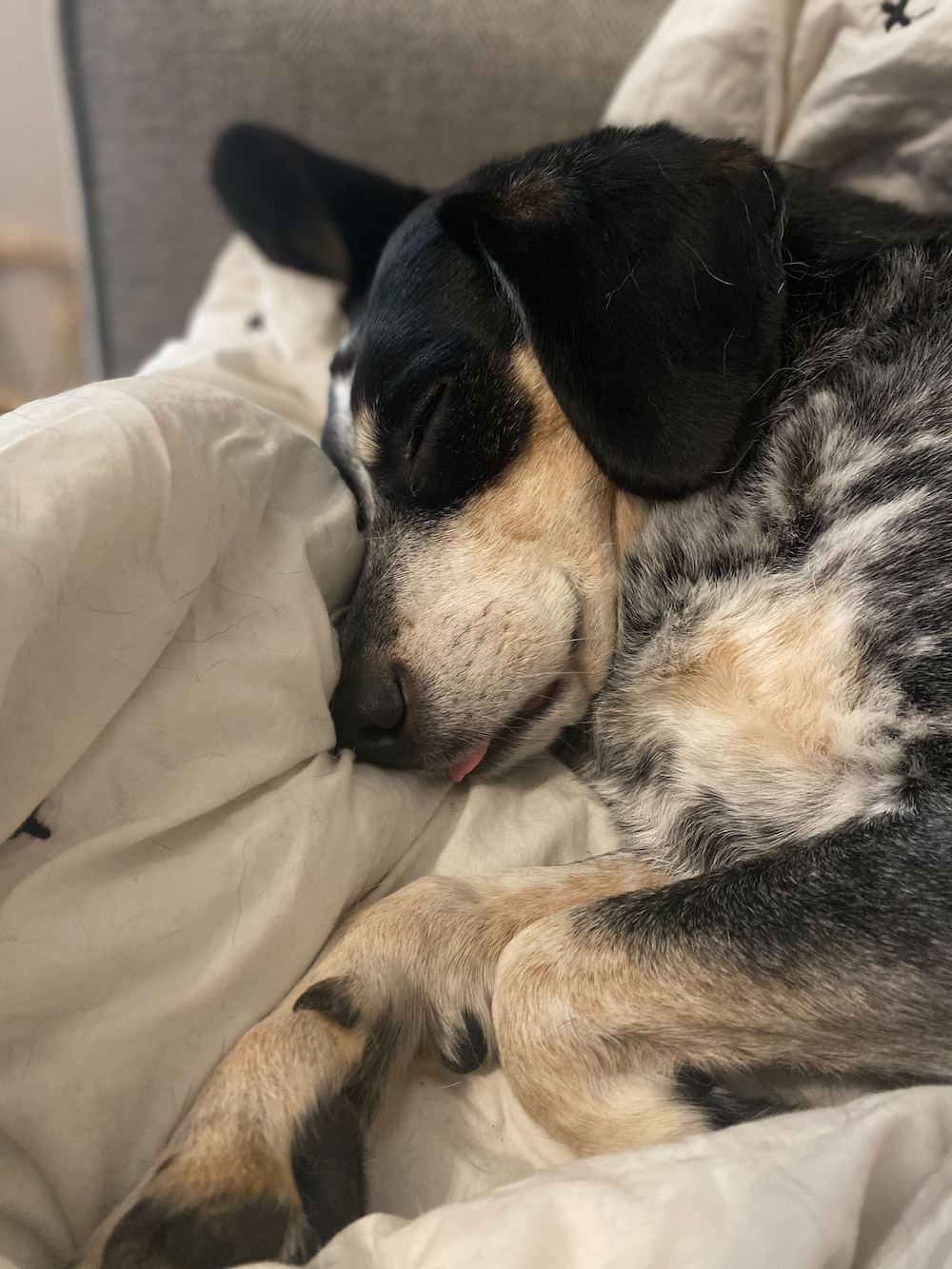 Remember that a deaf dog cannot hear you coming, so it’s easier to inadvertently ambush them. To prevent your dog from getting upset when you touch or wake them, you can try desensitizing them to stimuli that might catch them by surprise.

“You have to be careful with adult dogs,” says Herman, “because you don’t know their reactions if they’re a new dog to you.” But, for puppies, she suggests a method that’s worked for her: walking by while the dog is asleep and tossing a small, lightweight treat toward their face, waking them up. “Wouldn’t we all like to wake up in the morning,” she asks, “being pelted by hundred dollar bills? Yeah, I’ll take that.” Over time, this method could make the dog feel that suddenly being woken up is a sign that pleasant things are on the way.

Check in with your dog

Because a deaf dog cannot hear you moving around your home, it’s possible that they might become anxious or start searching for you if you leave without checking in with them first. If your dog is awake, let them see you leaving the room instead of sneaking out. There might be some trial and error in this process, as many trainers will tell you not to make a big deal about leaving any dog at home.

Herman suggests that, if you leave while your dog is asleep, you could try leaving them with a toy or puzzle that has food inside. That way, she says, “if they wake up, they’re like, ‘Oh, I can do this dog Nintendo instead of looking for my person.’”

A deaf dog needs just as much physical and mental exercise—and love—as any other. So give yours enrichment opportunities and chances to walk, sniff, and use all of their talents. Herman, who’s owned a dog that went deaf later in life, says that there are some upsides you may not have considered. “As someone who has had a dog who is an alarm barker,” she says, “the deafness became a blessing.”