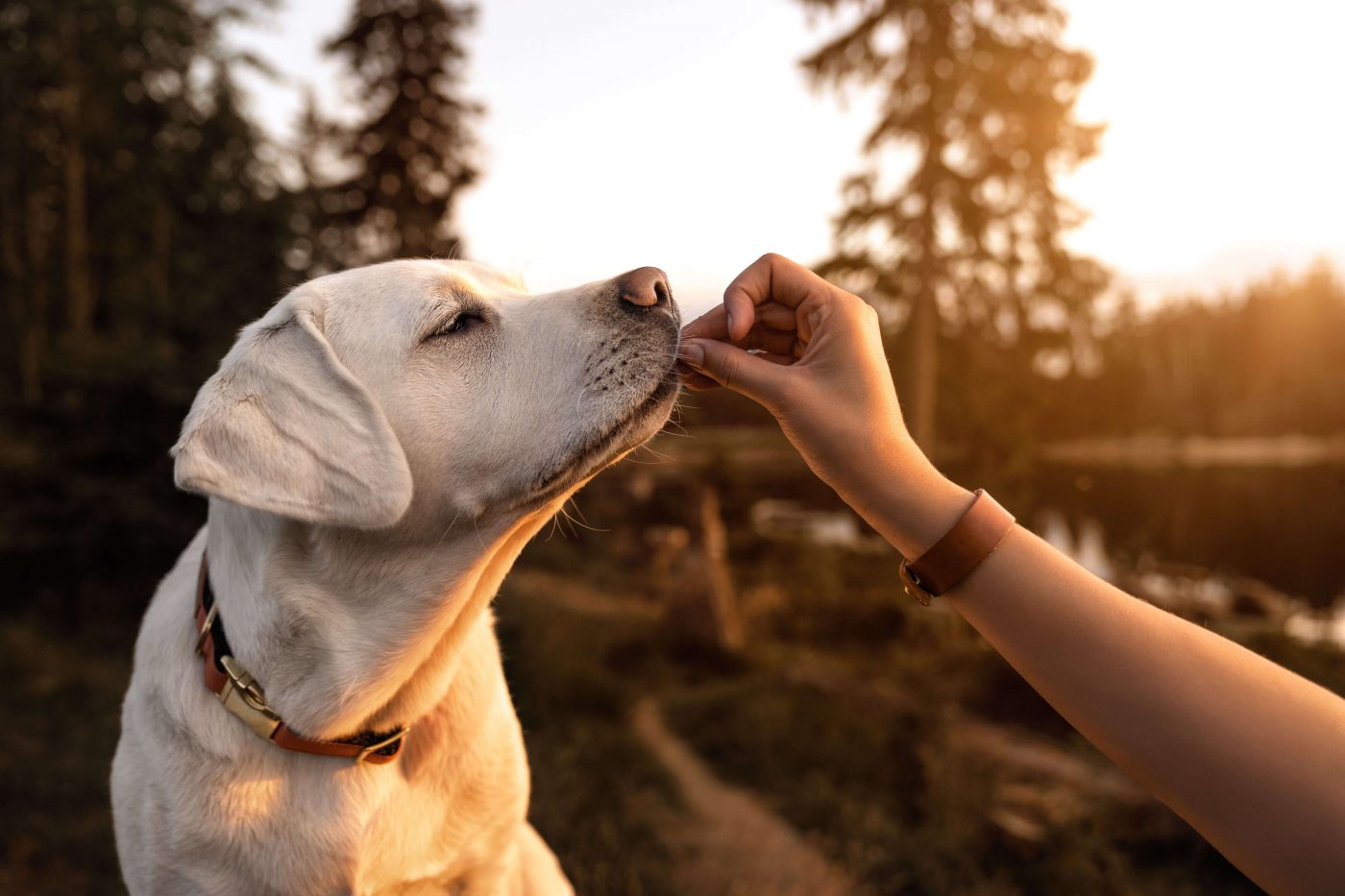 There’s a weight problem in America and it isn’t just affecting humans.

The most recent statistics classify the majority of dogs in the U.S.—56%—as overweight or obese. While that makes obesity a major health crisis for dogs, it’s a problem that’s often overlooked, as many pet owners may not even realize their pets are overweight.

“I see people coming in constantly with 90-pound Labs and they say, ‘she looks great,’” says Dr. Ernie Ward, DVM, CVFT, and founder of the Association for Pet Obesity Prevention (APOP). “Well, actually, that dog is 15 pounds overweight. But we’ve normalized it.” This kind of dog embodies what APOP has called the “fat pet gap”—the misalignment between what we think a dog should look like and what a healthy body composition should really be.

Obesity in dogs comes with significant consequences. In fact, Ward and other vets call it our pets’ biggest health threat. And it’s not an isolated issue; obesity is linked to a whole raft of health problems including arthritis, chronic kidney disease, bladder/urinary tract disease, liver disease, low thyroid hormone production, diabetes, heart failure, high blood pressure, and cancer. “We think it’s very important that people understand this isn’t just a cosmetic issue,” says Dr. Ward. “There is a physiological consequence to this.”

A slimmer margin of error

While obesity is loosely defined as 30% above ideal body weight (there is no universally accepted definition for pets), veterinary experts say just being overweight impacts pet health. And that’s one of the challenges in addressing this issue—many pet owners may simply not realize there is an issue.

“You look at your dog and it seems healthy and it’s active and doesn’t have any apparent health issues,” says Ward. “So you say, ‘it’s normal,’ and by extension its morphology, or its size, is normal.” But the problem is that we often don’t know what what “normal” is when it comes to dogs, so we project our own human-centric perspective. “In human terms, we think we just need to drop five pounds,” says Ward. “Well, the amount of physiological impact of a few pounds is much, much greater and more concentrated in pets than in people. Five pounds on a cat is catastrophic. Five pounds on a Lab is significant. We think a few pounds off my Lab; what could the consequence of that be..? But the consequences are that Lab’s hips are deteriorating, it’s causing damage to the kidneys, it’s probably causing high blood pressure which is causing a constellation of problems, and it’s increasing cancer risk.”

Dr. Carol Osborne, an integrative veterinarian at Chagrin Falls Pet Clinic in Ohio, echoes the fact that a dog doesn’t have to be clinically obese to experience health consequences. “Being just 10% overweight decreases a dog’s lifespan by one-third and predisposes him to heart, kidney and liver disease as well as diabetes, arthritis and cancer,” she says.

Osborne says that adipose tissue (aka fat) is filled with blood vessels, and the added rich blood creates inflammation. This all creates an environment attractive to cancer cells and increases a dog’s risk of developing the disease, she says.

“Cancer is the number one killer of dogs today,” says Osborne.

And, for some smaller breeds, extra pounds make a huge difference. “Three extra pounds for canines in the ‘toy’ category is the equivalent of gaining approximately 30 pounds for you or me,” she says.

Conversely, obese dogs may benefit from even just slight weight loss. According to a clinical trial published in 2010, obese dogs with osteoarthritis showed a significant decrease in lameness from weight loss starting at 6.10%.

Another study, published in the Journal of Veterinary Internal Medicine in 2018 found that being overweight was associated with a shorter lifespan in the 12 dog breeds studied. The estimated reduction in lifespan for the overweight group was up to two-and-a-half years.

“We look at a dog with obesity and if a dog loses as little as 6% body weight—that’s six pounds on a 100-pound Retriever—it makes a difference,” says Ward. “It doesn’t take a lot of weight loss to make the pet feel better. I really try to emphasize that when I’m talking to (pet owners) because it’s a quality of life issue as much as a longevity and disease-prevention issue.”

Osborne says she’s seen this quality of life improvement from weight loss time and again. One of her clients came in with a two-year-old male Pomeranian named Smokey that weighed in at 45 pounds. When he first visited, the dog already had one cranial cruciate ligament (CCL) surgery on a hind leg and was about to have a second. Osborne changed his diet—which involved stopping the dry kibble and replacing it with chicken and fresh vegetables.

“At this point he is down to 22 pounds,” she says. “He acts, feels and looks like a puppy instead of sleeping under the kitchen table most of the day and barely moving at all. He’s running around the house, ready to play and having a ball.” And he won’t need another surgery after all.

For pet owners with dogs who are not obese and who aren’t showing obvious health symptoms, the concern may not seem as pressing. But Ward warns against not taking action when you can.

“I see too often a 10-year-old Lab mix and suddenly they can’t get into the car because of crippling hip arthritis caused by obesity,” he says. “But if you can rewind the tape, you don’t have the years of cumulative damage. (Obesity) is a slow and insidious and silent killer, and people may know it’s happening, but they don’t take action until there’s a crisis. I say that nobody treats obesity until there’s a catastrophe. And when it’s catastrophic, you may not recover.”

A guide for dog owners: How to assess your dog’s weight

The question remains: How can pet owners determine the ideal weight for their dogs?

The rib test
Osborne says it begins with keeping regular track of your dog’s body condition. She recommended the “rib test.”

“Stand behind your dog, gently run your hands along either side of the rib cage,” she says. “You should be able to easily feel, but not see each rib, and your dog should have a waist or a tucked up area in front of the hind legs. If you can pinch more than an inch and/or your dog has lost his waist, it’s probably time to think about reducing.”

The standing test
Ward opts for another method. “I recommend you do the standing test. Look at the dog from the side—lean down and look from the side—and see [if] their abdomen or stomach is sagging,” he says. “Then I look from the top: From standing I should see an hourglass indentation in front of the hips. You should see the chest extend out and the waist tapers in making an hourglass.”

While dogs vary widely in body shape and volume of hair and fur, Ward says this test should work for 95% of dogs (he notes that exceptions include English Bulldogs and Pugs). If your dog has extremely thick, long hair, be sure to perform the touch tests as you may not see the contours as clearly. 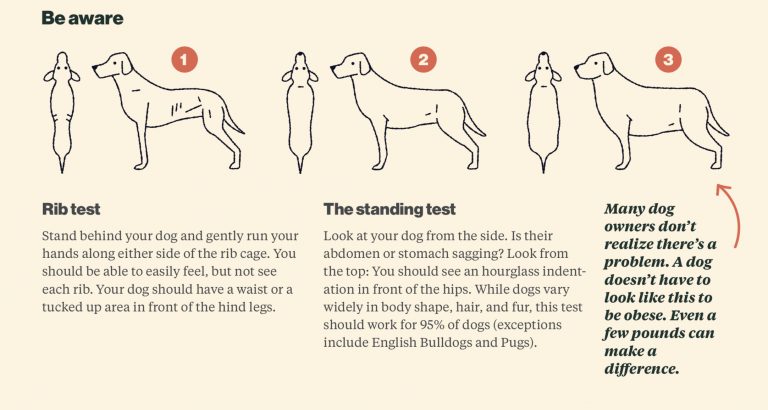 Many vets agree that weight loss begins and ends at the food bowl for dogs and cats. Based on available literature and experience, Ward breaks down the weight-loss math this way: 60-70% diet and 30-40% exercise.

So, knowing exactly how much to feed your dog becomes key. Like many experts, Ward cautions against using the guidelines on most commercial dry dog food packages to determine how much you’re feeding. The parameters, which are based on adult dogs for all life stages, are far too broad to accommodate every dog’s needs. For example, Ward says, spaying or neutering a dog reduces their energy requirement by 20-30%. “So already, if you’re feeding according to guidelines you’re overfeeding a pet who is spayed or neutered,” he says. “I see so many pet owners say ‘I’m feeding exactly what they say on the bag,’ and it’s like ‘no, that’s too much.’”

It’s a good idea to work with your vet to assess your dog’s body condition, muscle condition, lifestyle and any concurrent medical conditions and determine how many calories you should be feeding.

You can also consult the tools available online (including on APOP’s site) which provide a good estimate of weight ranges and caloric needs by breed and size.

As to food quality, Osborne recommends fresh food including lean protein like chicken, turkey, fish, eggs and tofu, and fiber through fresh vegetables such as Brussels sprouts, broccoli, cauliflower, kale, cabbage, and spinach.

While some dog owners hesitate around the idea of feeding “people food,” this kind of real, fresh food is more nutrient dense, and more bioavailable than dried, processed food. Those planning to prepare fresh food at home for any length of time should be sure to consult their vet to ensure meals are correctly balanced and contain the necessary vitamins and nutrients.

While food is the biggest factor, pet owners should also plan to exercise dogs for a minimum of 20 minutes, twice a day. And be careful with snacks. You can use fresh veggies as healthy treats and avoid processed mystery-ingredient treats and things like pig ears, and bully sticks.

“If you don’t eat it, neither should your dog,” Osborne says.