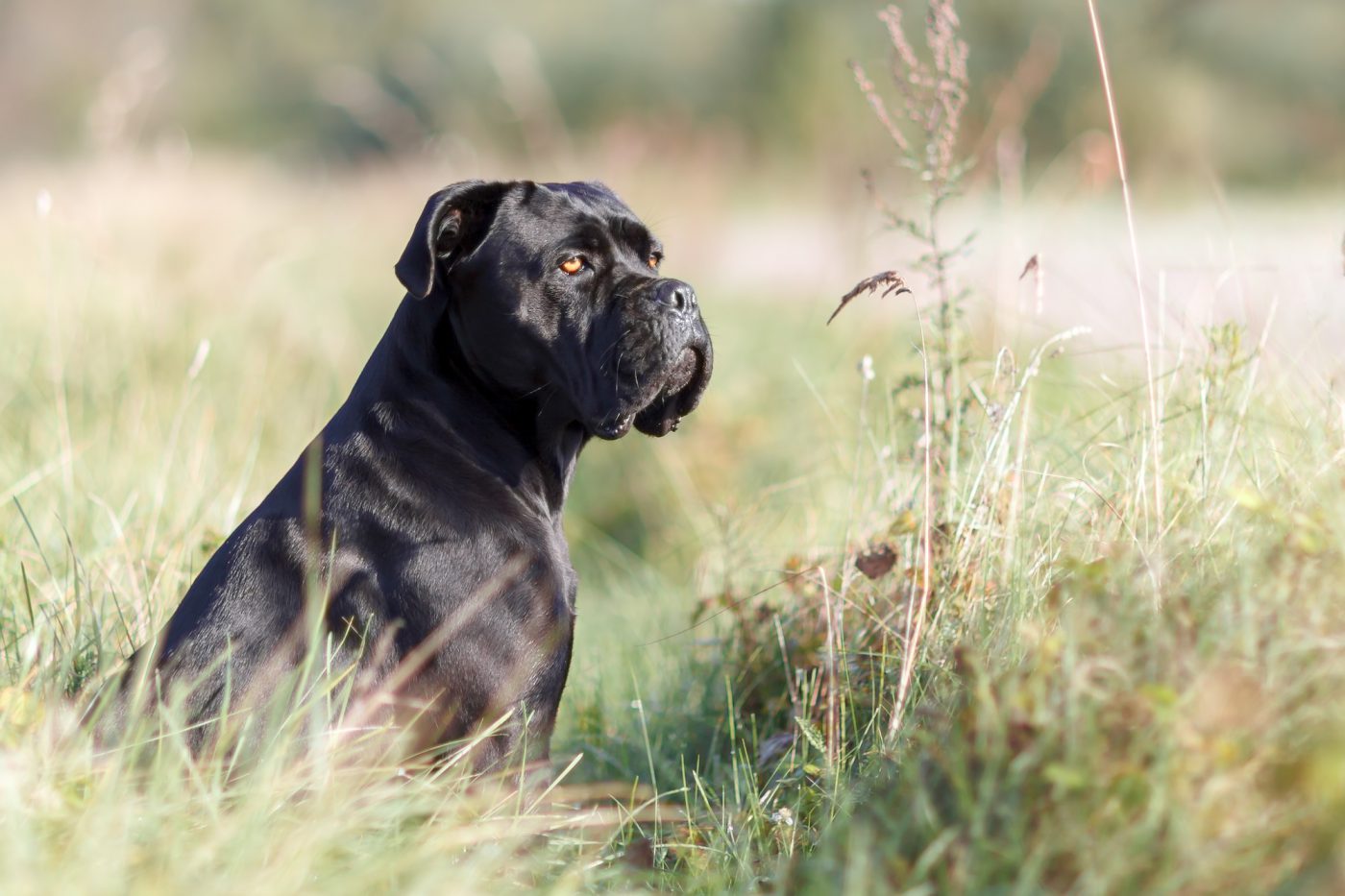 Noble, intelligent, loyal, strong. These are some of the most common words used to describe the cane corso, an Italian mastiff of ancient lineage.

With a large stature and protective nature, corsos have been war dogs, large-game hunters, guardians, farm workers, and more over their long history. And after nearly disappearing in the postwar period, they have exploded in popularity in recent years, taking their place in the top 25 most popular dog breeds in the U.S.

In short, the cane corso is a lot of dog, requiring an attentive owner willing to put in ample training and socialization time.

While these dogs are not for novices, they are excellent companions. “I can’t emphasize enough how awesome this breed is,” says Melanie Vandewalle, the president and founder of the Must Love Corsos Rescue. “They do require a higher level of management, but they are super loyal and super intelligent, and they’re so special.”

Here’s everything you need to know about the guard of the estate, the cane corso. 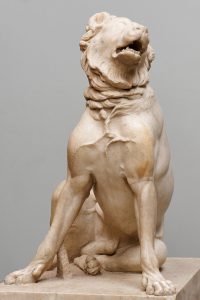 A Roman sculpture of a Molossus dog

A brief history of the cane corso

The cane corso’s history goes back to ancient Rome, and beyond. Most experts believe they’re descended from the now-extinct Greek Molossus dogs and later, after being bred with fighting dogs from England, they became the Roman “pugnaces” (a category of dogs used for attacking wild animals). Historically, they fought alongside Roman legions, hunted boar and other prey, and, later, guarded flocks, property, and people on farms.

The corso almost went extinct after World War II but experienced a resurgence in Italy in the 1970s, and was brought to the United States in the 1980s. The breed was recognized by the American Kennel Club in 2010.

Their name means “guard of the estate” in Latin, though some corso advocates, including Vandewalle, believe it means “coursing dog,” referring to the practice of coursing, or pursuing prey using sight (as opposed to scent).

Regardless of the etymology of the name , the cane corso (pronounced Kah-nay corso) is a working dog through and through, and one whose instinct is to protect their family.

Corsos are typical mastiffs in every sense: large and impressive, intelligent and affectionate, and intensely loyal to their people.

Standing at approximately 27 inches tall and weighing between 80 and 120 pounds, with a large, square head and deep chest, adult corsos have an imposing stature. But ask any corso owner, and you hear a recurring theme: Vandewalle says her first corso, a nine-year-old named Menace, is an affectionate lap dog.

Paulina, owner of Francesca the corso (pictured below) calls her dog “the sweetest.” “She thinks she is a lap dog,” she says, “and always wants to be on top of us.”

Like many powerful, high-drive, or “tough-looking” dogs, like pit bulls, Rottweilers, and German shepherds, corsos have earned a reputation as dangerous, or even aggressive. And, as with all of these dogs, that rep is more than a little unfair if you ask breed experts, and many of the stories of dangerous corsos are actually stories about irresponsible dog owners.

Cane corsos do not rate high on aggression scales and in fact rank high in tolerance of unfamiliar situations according to the American Temperament Test Society. (For context, 88% of cane corsos tested passed the ATTS test, compared to 85% of golden retrievers.) Corsos will protect what they are taught to protect, guard what they are taught to guard, and if they’re not given any guidance, they will start deciding things for themselves, and can act out in destructive ways.

Much like pit bulls, the corso’s reputation as an aggressive breed creates a negative feedback loop: people purposely seek them out for those perceived dangerous traits and mismanage or even abuse corsos, which can foster aggression.

As with every creature under the sun, each corso is different. Vandewalle has three herself, one of whom alerts at everything, another who rarely barks. One of her dogs loves to chase balls and frisbees, the other two are utterly uninterested in fetch.

When they are given jobs to do (even as simple as daily training and skill practice) and carefully socialized, corsos tend to have an easy-going temperament

Vandewalle emphasizes, “These are family dogs. They love their people. Yes, they are guard dogs, and they will protect their home, but that doesn’t make them aggressive.”

In fact, with early socialization and the right training and care, corsos do well around strangers, other animals, and even calm children.

What does it take to care for a cane corso?

Cane corsos are not for beginners, as they require hands-on, consistent training. These are not “set and forget” dogs you can take to a puppy manners class when they’re young then let them live their lives. But then few dogs are.

“They love their families,” Vandewalle says. “They’re not, you know, bouncing off the walls with energy. But they’re work dogs. So they need to work.”

Corsos are extremely intelligent and need consistent, lifelong training from an owner who will be clear about expectations. If they aren’t given direction, they will act on instinct, which is to treat anything outside of their family unit and property as a potential threat.

Socialization must start at a young age and continue throughout their lives. It’s important to introduce your dog to as many people, noises, situations, and everyday items as possible, in a calm and controlled manner.

When it comes to training, corso owners owe it to their dogs to be direct and firm about expectations. That means setting boundaries from puppyhood (or as soon as you bring your adult dog home). Regular exercise and mental stimulation are key. Your average corso needs at least three walks per day or other outdoor exercise totaling at least an hour, though your mileage may vary depending on the dog.

Equally important to a corso’s well-being: mental stimulation or “work.” Many trainers and breed experts say that mental exercise can drain energy even more effectively than physical activity. They were bred to do jobs for their family, and they need clear boundaries and some regular tasks, otherwise they can become unruly and even destructive, pawing, jumping, and alerting at inappropriate times.

“Behavioral issues” is one of the leading reasons for surrender Vandewalle sees at her rescue. Even if your dog doesn’t have an actual farm to guard, you can provide them the mental and physical stimulation that “work” provides. Nose games are a great pastime and burn lots of mental energy. Try a flirt pole, or a backyard obstacle or agility course—you can make one with household objects, or purchase one designed for home use. If you live somewhere where there’s snow in winter, try getting your corso to pull a sled! (Be sure to use an appropriate harness that distributes weight.)

Joint problems: Like many large dogs, corsos are at higher risk of joint problems. Extra weight can exacerbate arthritis, hip dysplasia and elbow problems, which are common among the breed. That is why it’s essential to feed a healthy, precisely portioned diet. You may also wish to avoid high-impact exercise such as running, which can be hard on the joints. (If you’re an active person, however, Vandewalle says that corsos do make great hiking partners once they’re mature adults and their growth plates are closed.) Minimize jumping from elevated places such as sofas and car hatchbacks, which can cause joint and spinal injuries.

Bloat: As with many large and giant breeds, corsos are at risk of bloat, a potentially life-threatening condition in which the stomach fills with gas and twists. Bloat actually refers to two, often combined conditions, gastric dilatation and volvulus. Gastric dilatation happens when the stomach becomes distended as it fills with gas. Gastric dilatation and volvulus (GDV), occurs when the gas-filled stomach then rotates, obstructing blood flow. The symptoms can include drooling, retching, a swollen belly, hunching, restlessness, and labored breathing.

A dog with bloat, or suspicion of bloat, requires immediate medical attention. Risk factors for bloat include age, relatives with the condition, and being fed one large meal a day. To prevent bloat, make sure your corso doesn’t eat too quickly. And while raised bowls have been recommended in the past to prevent bloat, newer research has found that they may actually increase the risk of bloat.

Treatment often requires gastric decompression, generally with an esophageal tube to release air and fluid, and surgery to restore the stomach’s natural position.

Your veterinarian may recommend a procedure called a gastropexy, while your dog is having their spay or neuter surgery at a young age. This surgery tacks the stomach to the body wall, which prevents gastric dilatation and volvulus from occurring. Speak with your veterinarian to determine if this is a good option for your dog.

Anxiety: While not exactly velcro dogs in the vein of vizslas, cane corsos do not like to be separated from their family members. Vandewalle says that, as a result of their family-oriented nature, corsos often suffer from separation anxiety if they’re not properly taught how to spend time on their own. “Anxiety is the number one behavior challenge we run across,” she says. “These are not dogs that thrive on being alone.” It’s a good idea to crate train puppies (read more about crate training here).

Promote healthy growth: If you’ve got a cane corso puppy, keep in mind that large-breed dogs typically take longer to fully develop their musculoskeletal system. This means that some corsos won’t stop growing until they’re two years old. And it’s important they grow at a healthy rate because growing too fast can cause orthopedic diseases and obesity. Avoid free-feeding. Instead, structure meal size and time— feed a correctly portioned amount of food to a young puppy three to four times per day until around 6 months, then switch to once or twice a day. 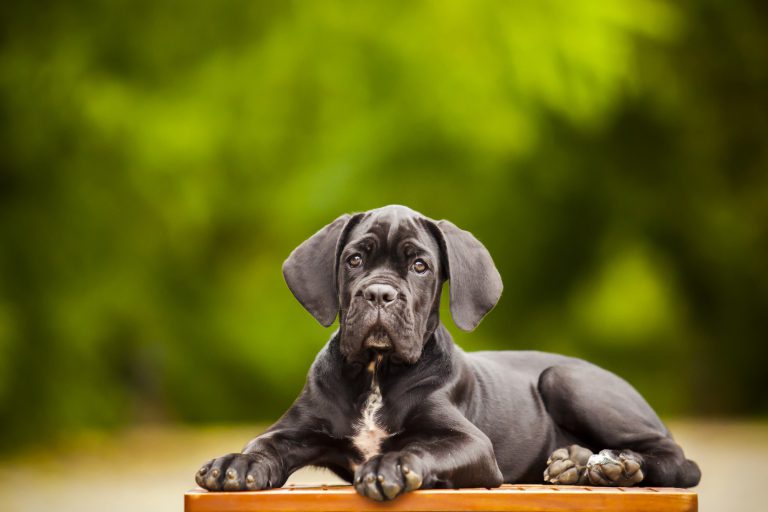 It might be tempting to fuel growth with supplements, but it’s especially important to maintain the right nutrient balance with large pups, especially calcium, phosphorus, and vitamin D. Too much of these nutrients can cause serious health issues. Keep your growing, large-breed puppy healthy by feeding them a nutritionally rich, complete and balanced diet with the right ratio of protein, fiber, carbohydrates, fat, and micronutrients.

Canine obesity is not simply an aesthetic issue; it’s linked to myriad health issues, including cancer. And the margins are slimmer than you might think—being even a little overweight can increase your cane corso’s odds of developing a host of diseases like arthritis, and diabetes. A fresh-food plan, tailored to your dog’s needs, and delivered in pre-portioned packs, makes weight maintenance easy.

Maintaining a lean body condition can also help stave off joint issues. And fresh food from The Farmer’s Dog contains Omega-3 fatty acids, proven to reduce inflammation and improve arthritis. Even if kibble contains these healthy fats, they can go rancid sitting on the shelf for long periods. Rancid fats don’t deliver the intended health benefits, and in fact can contribute to inflammation.

In sum, if you’re looking for a healthy and nutritious option for your cane corso, consider fresh food. Feeding fresh dog food made from human-grade meat and vegetables is the best way to be sure of exactly what you’re putting in your dog’s bowl. Because it’s lightly cooked, the food retains its nutritional integrity, and it comes pre-portioned according to your dog’s unique profile so it’s easy to manage your dog’s weight, and to change their daily caloric intake as their needs change.

If a cane corso or coros mix sounds like a good fit for your life, consider adopting one from a shelter or rescue. Visit Must Love Corsos Rescue or search a rescue organization near you to adopt, volunteer or learn more about this big, beautiful breed.

For those considering bringing a boxer into their household, or for current owners looking...

With help from experts, we delve into what we know about how dogs' minds... 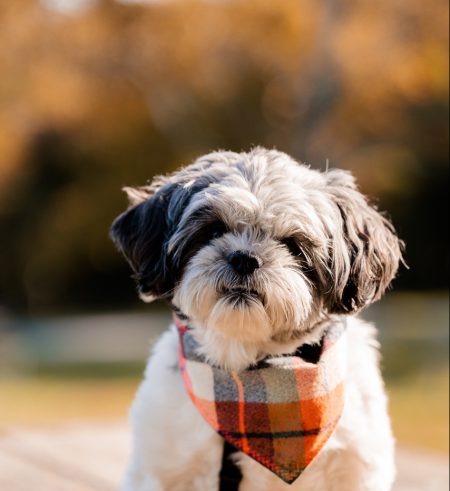 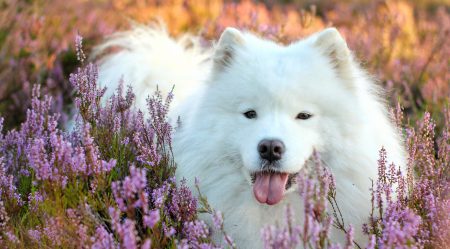