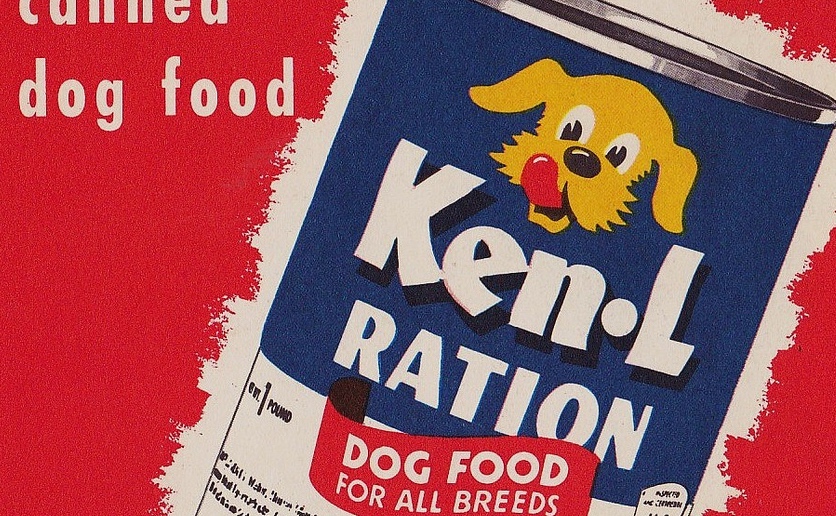 For as long as most of us can remember, pet food has come in a bag. But before the mid-1800s, dogs primarily lived outside and ate raw meat or table scraps. It was only after the Industrial Revolution that the growth of a more affluent middle class led to cats and dogs becoming house pets who were considered more “civilized” companions than their outdoor, working counterparts. Let’s take a look back at how the commercial pet food industry got its start.

The world’s first commercial pet food was developed in 1860 by an electrician named James Spratt. After journeying from Ohio to the United Kingdom to sell lightning rods, Spratt noticed dogs along the riverbanks in Northern London eating leftover hardtack, the dry biscuit sailors ate on long trips. Made of flour, water, and occasionally salt, these inexpensive crackers were used by sailors in need of long lasting, imperishable food during lengthy sea journeys. Spratt reasoned that dog owners were similarly in need of a shelf-stable option for their pets, so he ditched the electrician gig and set out on a new career path, creating the first biscuit for dogs.

Spratt’s Meat Fibrine Dog Cakes contained a mix of blended wheat, vegetables, beetroot, and “the dried unsalted gelatinous parts of Prairie Beef” (interestingly enough, Spratt remained notoriously tight lipped about his biscuits’ specific meat source throughout his lifetime). The biscuits were expensive, with one 50-pound bag costing the equivalent of an entire day’s work for a skilled craftsman, and Spratt wisely targeted “English gentlemen” who could afford the higher price point.

Despite the high cost and lack of transparency about his meat source, Spratt billed the biscuits as dogs’ primary food source. After launching the company’s American operations in the 1870s, Spratt employed an aggressive advertising strategy: he started targeting health conscious pet owners and dog show participants and bought the full front cover of the first American Kennel Club journal in January 1889. In promoting his product, he called upon a few old friends (read: rich, English country gentlemen) for testimonials touting the benefits of Spratt’s dog cakes. The American public was hooked and quickly traded the table scraps they had been feeding their dogs for Spratt’s biscuits. Spratt also notably pioneered the concept of “animal life stages” with appropriate foods for each individual stage. Sound familiar?

By the early 1900s, more people were taking notice of the commercial pet food market and convenience was the name of the game.

Canned pet food became the most popular option on the shelves after Ken-L Ration, the first canned dog food in the United States, was produced in 1922. Made of horse meat (which was carefully marketed as “lean, red meat” and only disclosed in much smaller letters at the bottom of the packaging), canned food was stamped with a seal of government approval and had a 90% share of the market. By 1941, canned food was so successful that producers were breeding horses just for dog food and slaughtering 50,000 of them per year.

But when tin and meat were rationed during World War II and pet food was classified as a “non-essential,” producers had to get creative. The combination of these imposed rations and pushback from animal lovers who were furious about the number of horses being killed every year for dog food created a golden opportunity to introduce a new, disruptive product in the pet food industry.

Several big name players joined the race to a new, more shelf-stable product: General Mills acquired Spratt’s US business in the 1950s, and The Ralston Purina Company began experimenting with the machines they were using for their Chex breakfast cereal to create a more palatable dog food. Given the rations on metal cans, cardboard cereal boxes seemed like the perfect alternative for storing shelf-stable pet food.

In 1956, the first dry kibble was produced through a process called extrusion. Extrusion is a method used for manufacturing large quantities of shelf-stable foods (like, say, sugary breakfast cereals). It works like this: wet and dry ingredients are mixed together to form a dough-like consistency, which is then fed into a machine called an expander. The dough is cooked under extreme pressurized steam and high temperatures before being extruded (or pushed) through a die cut machine and forming the small shapes we recognize as kibble today. The use of extrusion for commercial kibble production gained momentum throughout the 1960s and 1970s as companies used the technology to create new flavors and varieties.

In 1964, The Pet Food Institute (a group of pet food industry lobbyists) launched a series of ad campaigns to convince consumers that commercially prepared dog food was the only option to feed. The campaigns were hugely successful in convincing the American public that their dogs’ diets should be kibble-based and were reminiscent of the early marketing strategies employed by James Spratt so many years before.

Once kibble had been established as the leading pet food option, advertising strategies became more niche-based to differentiate brands. By the 1980s, Hill’s Pet Nutrition had introduced prescription kibble for different ailments (like kidney and liver failure) and continued to diversify by the 1990s, producing kibble based on individual activity level for weight management.

Today, pet food companies still produce kibble by extrusion because it facilitates flexibility and density control and better pasteurization. All ingredients (yes, even the high quality or organic variety) are cooked at the same extremely high temperatures and then dried after extrusion in order to remove moisture. While this process optimizes product shelf-life, it can also significantly impact the nutrient composition of the food, and poses many other health risks. Additionally, much of the commercial pet food landscape has become increasingly unregulated and is marked by frequent recalls and health controversies.

Still, a quick walk down pet food aisles shows that the past century’s marketing campaigns have been successful. The American public largely regards commercial pet food as the go-to choice for feeding their dogs, and popular products are shelf-stable and convenient, the two tenets that guided mass production in the early 1900s.

While humans have gone from eating real meat and vegetables as our predecessors did to ingesting a highly processed diet of fast food and “convenient” packaged food in the ‘50s and ‘60s, we’ve made a return to real, whole food in the past decade. But as we begin to educate ourselves about the key differences between highly processed food and the fresh, real stuff, one can’t help but marvel at how much closer we were to feeding our dogs the right way when they were simply eating fresh, human-grade food back before the start of the dry dog food industry.