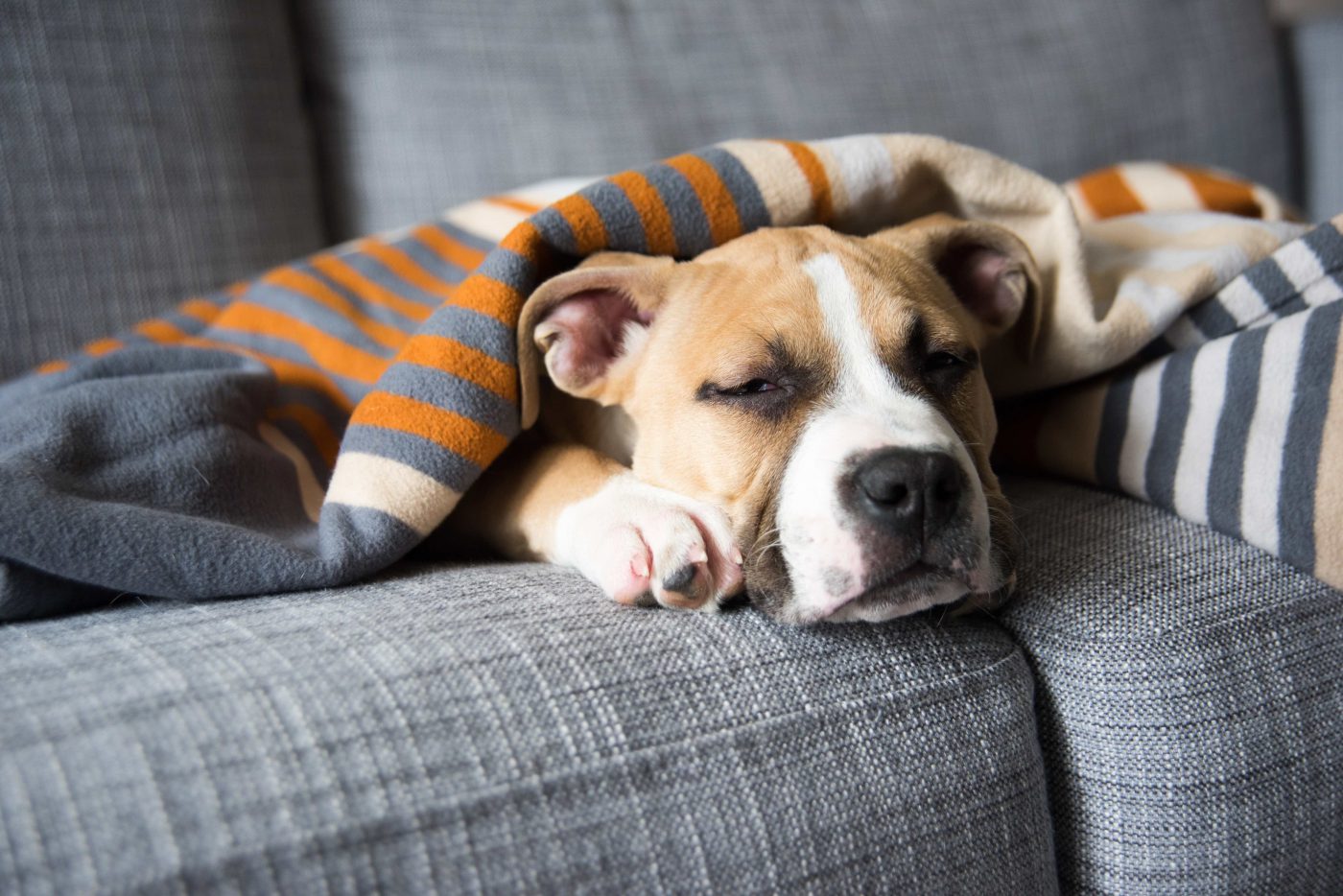 No matter how hard you try to monitor your dog’s health, vomiting happens. Like humans, dogs vomit occasionally to expel food (or other substances) they shouldn’t have ingested. In many cases, this type of one-and-done vomiting isn’t a cause for concern.

However, dogs can throw up for a variety of reasons, many of which can be serious. Vomiting isn’t a pretty topic, but understanding it provides important clues about your dog’s health. Here are some of the keys to decoding what’s coming up, and what to do when vomiting happens.

A short list of the many causes of vomiting in dogs includes the following:

The color of your dog’s vomit can provide some indication as to what might be going on inside their body, and whether there’s an underlying issue to be concerned about.

“Vomit can be any color, from clear to yellow to red to brown,” says integrative veterinarian Carol Osborne, DVM, of the Chagrin Falls Pet Clinic in Chagrin Falls, Ohio. “And it can be a reflection of whatever the dog ate—for instance something with food coloring. If it’s bright-green or teal-colored, it could mean that your dog ate mouse or rat poison, in which case you should visit the vet right away.”

One thing to note, though: any of the conditions above can cause vomit to be any number of colors, so don’t rely on color as the sole gauge of what the underlying condition might be.

Green and yellow vomit
Vomit that’s yellow or green, or looks foamy, usually contains bile, a substance that is produced by the liver and that assists with the digestive process. If your dog’s vomit is foamy it can indicate a buildup of stomach acid. Sometimes dogs will occasionally vomit bile if they go too long without eating or if they are vomiting on an empty stomach or with a high frequency.

Vomiting of bile that occurs in the morning can be an indication of a more rare disorder, Bilious vomiting syndrome (BVS). Feeding your dog late at night, or more frequently may resolve this issue, but you should consult your vet for a diagnosis.

Green vomit can also occur if your dog ate grass, leaves or other plant material that irritates the stomach. It’s a common assumption that dogs eat grass when they’re feeling ill, to induce vomiting, but there’s no conclusive research proving it. Eating grass can result in vomiting, but one 2008 study found that while 79% of dogs were reported to have eaten grass, only 9% were reported to appear ill beforehand, and only 22% were reported to vomit afterwards. Still, it’s always worth a trip to the vet if your dog is exhibiting symptoms like lethargy, diarrhea, or weight loss, whether in conjunction with grass snacking, or not. And since some plants are toxic to dogs, call your veterinarian right away if your dog eats unknown plant material and starts to vomit.

Red brown and black vomit
Bright-red vomit indicates that your dog is vomiting blood (called hematemesis). This can be a signal of gastrointestinal diseases, inflammation of the stomach (gastroenteritis), a traumatic injury, or ingestion of poisons. Dark-red vomit, dark-brown vomit, black vomit or vomit that looks like coffee grounds can also mean your dog is vomiting blood, but the blood has been digested or partially digested, which changes the color. If your dog is producing this kind of dark vomit, it can be a sign of stomach ulcers, intestinal blockage, or another serious condition and is typically cause for a vet visit (note that vomiting any color can be a sign of blockage, or a serious condition).

Some dogs will have dark brown vomit if they eat something colored brown—like chocolate, (which is toxic to dogs—if you suspect your dog has ingested chocolate, seek immediate veterinary care)—or poop. If the vomit has a telltale smell, it can mean your dog has indulged in coprophagia, which, though not a cause for immediate concern, should be discouraged as humans can pick up feces-born bacteria from dog licks, and some animal feces carries dangerous parasites (and it’s gross).

“One of the most common causes of vomiting and diarrhea we see in the New York Dog population is secondary to GI parasites,” says Dr. Schechter. “Many of these parasites are transmitted through fecal-oral contamination. Meaning if your pet is eating feces or sniffing poop on the sidewalk they are at a much higher risk of picking up one of these parasites”

How many times has your dog vomited? One or two vomits is typically less concerning than many episodes of vomiting that don’t seem to slow down. “All dogs vomit every now and then. If they just vomit one time, that is not a cause for alarm in most cases,” Dr. Osborne says. Persistent vomiting (more than once or twice in 24 hours) can be a sign that something is wrong and it’s worth a conversation with your veterinarian. For adult dogs (not puppies) withhold food and water for at least four to six hours after the last vomiting episode to allow the dog’s stomach to settle down.

Regurgitation can look like vomiting, but it’s different. “Regurgitation is the spontaneous reflux of food before it reaches the stomach,” Dr. Osborne says. “With regurgitation, the food comes up the same way it went down—it looks the same. It occurs effortlessly and sometimes it surprises the dog as much as the owner. With vomit, the dog is nauseous. A lot of dogs will look apprehensive.”

Regurgitation is less common than vomiting, but it’s not necessarily less serious. If your dog regurgitates their food just once, it’s probably nothing to worry about. However, frequent regurgitation is not normal and can indicate a serious health issue. “Regurgitation normally occurs because of an esophageal problem—the tube from the mouth to the stomach,” says Dr. Osborne. “Congenital esophageal problems, like megaesophagus, caused by abnormal nerve function to the esophagus, are probably the single most common cause of regurgitation, especially in younger dogs.” Other causes of regurgitation include hypothyroidism, myasthenia gravis (a neuromuscular disease), a tumor that might be obstructing the esophagus, hiatal hernias and narrowing of the esophagus. Discuss regurgitation episodes with your veterinarian to determine the root cause.

What to do if your dog is vomiting

Vomiting can be a minor issue—simple stomach upset that passes quickly—or it can be a full-blown emergency. But how can you determine the seriousness of your dog’s vomiting?

First, if the vomiting is persistent, visit the vet no matter what. Additionally, any significant amount of blood in the vomit can be a sign of an emergency. Although a small streak of red blood could be caused by simple stomach irritation (often due to the vomiting itself), vomit that is uniformly bright red, black, dark red or dark brown, or vomit that looks like coffee grounds is an emergency. Go directly to your veterinarian or an emergency animal hospital if it’s the middle of the night or the weekend. Your dog could be experiencing internal bleeding and needs immediate care.

Vomiting can also be a sign of food allergies. Allergy-related vomiting might occur hours or days after food consumption, so look out for any additional symptoms like skin irritation and itching. Many kinds of commercial dog food contain a long list of ingredients, including fillers and food additives, which can cause any number of reactions in dogs, including skin allergies, vomiting, and diarrhea. If you suspect a food allergy, you may also try fresh food, which allows you to keep a closer eye on exactly what your dog is eating, as it has fewer, and higher-grade ingredients. Many pet owners report a huge improvement in their dog’s digestive health after switching to a fresh diet.

When it comes to vomiting, be sure to examine any related behavior. Is your dog acting sick or having other symptoms (appetite loss, depression, lethargy, diarrhea, constipation) or do they seem pretty normal in between vomit episodes? Other signs of illness paired with vomiting mean the dog should visit the vet.

If your dog vomits routinely, it’s a sign that something is not quite right, even if your dog seems to recover quickly from these episodes. “If the dog is vomiting a few times a week for a period of time, that’s something that should be addressed,” Dr. Osborne says.

While vomiting be be nothing to worry about, it’s important, as always, to stay aware and look out for red flags. Waiting too long to bring your dog in for a veterinary visit can allow a smaller issue to become a more significant health problem.

This article was vetted by a vet.
Reviewed by Alex Schechter, DVM, Founding Veterinarian at Pure Paws Veterinary Care. 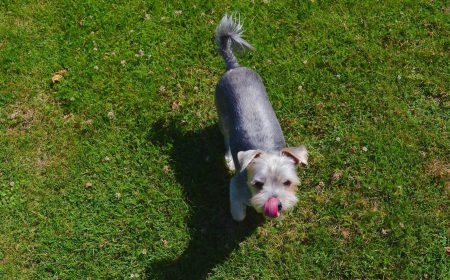 Puppy Guide: How to Feed Your Puppy

There's so much to know about raising a puppy. But one very important first... 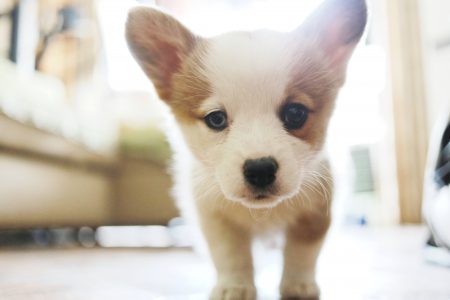 What to know about health, safety, and veterinary care for your new puppy. 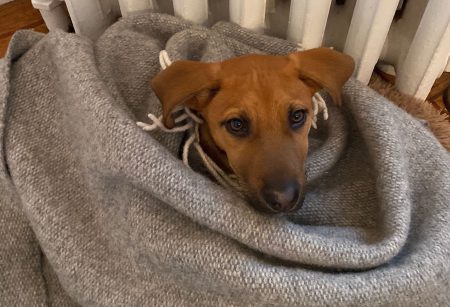 The biggest questions and challenges from the first six months of puppyhood, and expert... 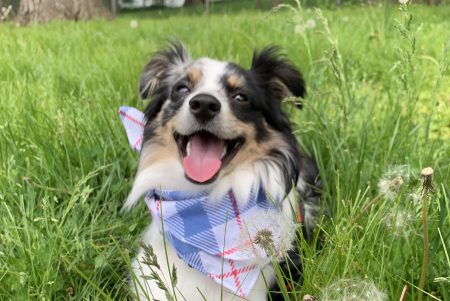 Bowie's mom Maddie takes us through the big questions and lessons from their puppyhood...