A Guide To Running (Safely) With Your Dog 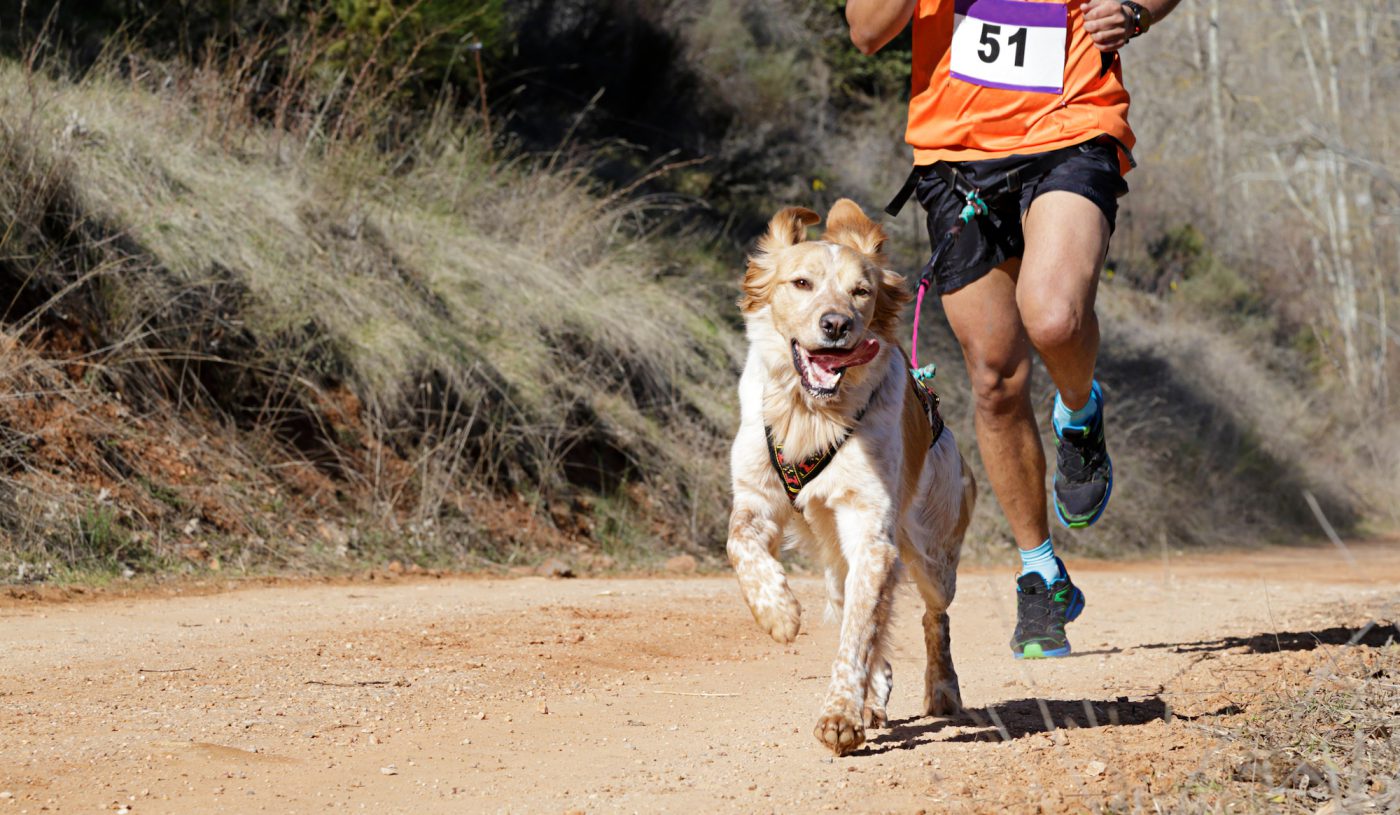 Running is one of the most popular sports in the world, and jogging with dogs has been called “the latest fitness craze” thanks in large part to a pandemic-driven interest in getting active without hitting the gym.

More than a craze, however, running with your dog, when done safely and mindfully, can have countless benefits—for both parties.

The benefits of running with your dog

From managing weight to improving digestive health, research shows that exercise can make countless contributions to the health of humans and dogs. And running is an especially accessible form of exercise.

“I have yet to meet a dog who has not benefited from running,” says Kimberli Weeks, owner and founder of The Fittest Dog, a dog-running service based in San Diego, California.

The benefits of running aren’t limited to your dog’s physical health. The activity can also improve mental health, social skills, and manners.

To run with their owners safely, dogs must learn skills that also help them in their day-to-day interactions with people and other animals. For example, your dog needs to learn to stay at your side instead of crossing this way and that while running. Further, to prevent pulling, which can cause choking, chafing, and injuries to both you and your dog, they will require good loose-leash skills.

And, simply, running makes dogs happy. The joy you think you see on your dog’s face when they’re running around isn’t just in your head; research shows that dogs can experience runner’s high, the nearly euphoric, relaxed feeling that many people feel after intense or prolonged workouts. Runner’s high can temporarily reduce anxiety and pain—and running can improve overall mood and even slow cognitive decline in the long run.

Weeks says she sees these benefits in her day-to-day work. “Running is not going to cure your dog if they’re dealing with serious behavioral issues [such as anxiety],” she says. “But it’s going to help. It’s a supplement.”

Running is a way for dogs to safely release the energy that often exacerbates anxiety and fear. It lowers the base level of fear and anxiety and builds trust, Weeks says, creating room to work on behavioral issues in a more meaningful way.

Not all dogs are born to run

Just as not all humans enjoy jogging—never mind training for a 10k—not all dogs are built for running. At least not sustained, miles-long runs.

While the vast majority of dogs love zipping around, changing direction in the blink of an eye, and releasing their energy through zoomies, many breeds could end up suffering from serious injuries if dragged along on a 5-mile loop.

Brachycephalic (short-nosed) breeds such as bulldogs, pugs, Pekingese, and Boston terriers  are not good candidates for running, mainly because they have breathing difficulties due to their skull and airway structure, says Dr. Siny Tsang, a certified professional canine fitness trainer (CPCFT) and owner of Core Pawtential. Difficulty breathing and trouble cooling down make running a risky pursuit for these dogs. Their anatomy puts them at a high risk for heat stroke, which may be life-threatening.

Similarly, she says, dogs with short legs and long backs, like corgis and dachshunds, and toy dogs, who might have trouble keeping up with their humans, are more prone to injury when making repetitive movements like those involved in running.

Age is more than a number

Age is also an important factor in picking the right canine running partner.

Tsang warns that you shouldn’t take puppies running, despite the fact that they have so much dang energy. For the first year and a half to two years of a puppy’s life, depending on breed and size, their growth plates—the soft areas at the ends of their bones that allow growth—are still open. The high-impact nature of running could cause a fracture or permanent damage to a young dog’s skeletal and muscular systems.

Similarly, older dogs may have trouble with a running program due to the strain on their joints. Always exercise caution when introducing a dog of any age to a new exercise program.

What kinds of dogs make the best running partners?

Not everyone wants or even needs to run long distances. If you’re a sprinter or more interested in shorter runs, Tsang recommends breeds that have been bred for speed, such as greyhounds, English setters, and Brittanys. 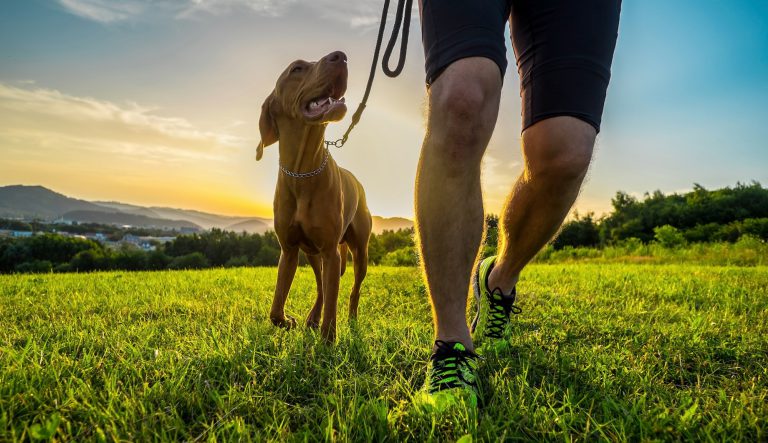 Do you need special equipment to take your dog running?

Many human runners keep it simple when it comes to gear: running shoes, athletic clothes that won’t chafe, and perhaps a watch that monitors physical activity.

You can do the same with your four-legged running partner. Here’s what you need:

A leash: Some runners choose a hands-free leash that clips around the waist (for reliably leash-trained pups only). Weeks recommends a leash with a second handle closer to your dog’s body, which is a safer and more effective way to control your dog if they start chasing an errant squirrel or trying to cross over in front of you. You could also use your everyday leash, as long as it’s not retractable.

A harness made for exercise: Harnesses are a good choice for running. But just as you wouldn’t want to wear jean shorts on a 10-miler lest you chafe your skin right off, you should avoid harnesses not meant to keep your dog comfortable during sustained, repetitive motions such as running or hiking. Weeks recommends looking for a lightweight harness that’s easily adjustable and has extra padding to maximize comfort and safety.

Water: Because dogs regulate their body temperature largely by panting, they dehydrate much more easily than we do, so make sure to bring water on runs. Even on pleasant days, your dog needs water much more quickly than you do.

“I bring water even on 65-degree days,” Weeks says. So she’s always prepared, Weeks either brings a water bottle and collapsible bowl on runs, or she designs her routes to pass by water fountains.

How to train your dog to run with you

One important word should guide eager runners considering taking their dog on the roads and trails: consistency.

As with behavioral training, consistency is key to turning your dog into a happy runner. That means committing to a regular schedule rather than just running with your dog when the mood strikes.

That consistency starts before you ever hit the pavement.

Consult with your vet

Both Weeks and Tsang emphasize the importance of consulting with your vet before leashing up. Even if you’ve adopted a dog who seems like a born runner, vets will be able to detect health problems that can make running dangerous.

Tsang uses arthritis as an example. If your dog has arthritis, they should never go running. And if you’re thinking, my dog is young, so that doesn’t apply to me, Tsang, who is certified in canine arthritis management, says that 35% of dogs over the age of 1 suffer from arthritis, and up to 80% of dogs 8 and older have the condition, even though only 20% show symptoms. These are the kinds of health risks vets can catch before you accidentally do permanent damage to your best friend’s joints.

Tsang further recommends consulting a canine fitness trainer. Trainers can assess your dog’s structure, posture, and movement and identify their specific strengths and weaknesses and advise you on potential areas to pay attention to in the future. 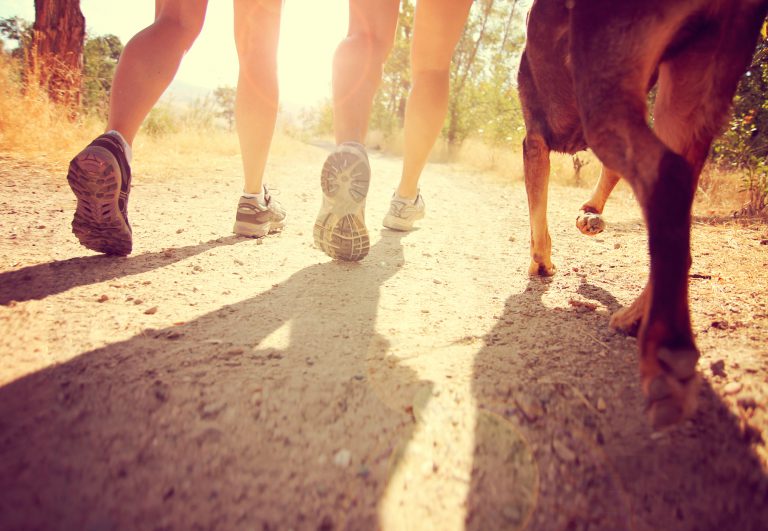 Gotta walk before you run

Just as babies learn to crawl before they can walk, dogs who are new to running need to have some basics down before they complete their first 5k.

If your dog still needs work on loose-leash walking and staying to one side—essential for enjoyable walking and running—start there. (Read our guide on leash training, or talk to a trusted trainer.)

Once you’ve mastered those skills, it’s time to start running.

Slow and steady: not just for tortoises

Before you’re ready for a sustained 30-minute run, you need to condition your dog (and possibly yourself if you’re also new to the sport). Eagerness does not equal ability, so even if your dog can run five miles right off the bat, doesn’t mean they should.

Tsang says that starting off slowly and building a foundation is important for injury prevention. “Taking unconditioned dogs running without a fitness plan is a recipe for potential injury. They will likely be sore for a few days afterwards at the very least.”

Weeks, who has conditioned countless dogs, recommends the following:

“Running is considered a repetitive exercise which can put a lot of strain on a dog’s joints, especially if running on hard surfaces,” Tsang says.

That’s why it’s essential to pay attention to everything your dog is doing: their gait, their breathing, their pace. If your dog starts to favor one leg, slows down, or starts breathing differently, stop and check for injury, take a water break, and even consider walking the rest of the route.

Keeping your dog the focus of the process

“If you are going out on a run with your dog, it’s not about you,” Weeks says. “It’s about your dog.”

Running with a dog is inevitably going to dovetail with your solo runs if you’re a serious runner who is used to maintaining a certain pace. More than training to maintain a certain tempo, the focus should be on what your dog gets out of the experience.

If you find yourself getting frustrated by the speed or distance your dog is capable of, Weeks says to slow down and keep in mind the benefits they’re reaping: the longevity, the joy.

Plus, she says, “You can do your run later.” If you really can’t sacrifice a single day of training, run your dog in the morning and then do hill repeats or something equally high intensity on your own later.

“Any time I’ve had a client get frustrated,” Weeks says, “I’ve challenged them to go out on their next run and just focus on their dog’s mood. They always come back to me and say, ‘God, that was fun!’”