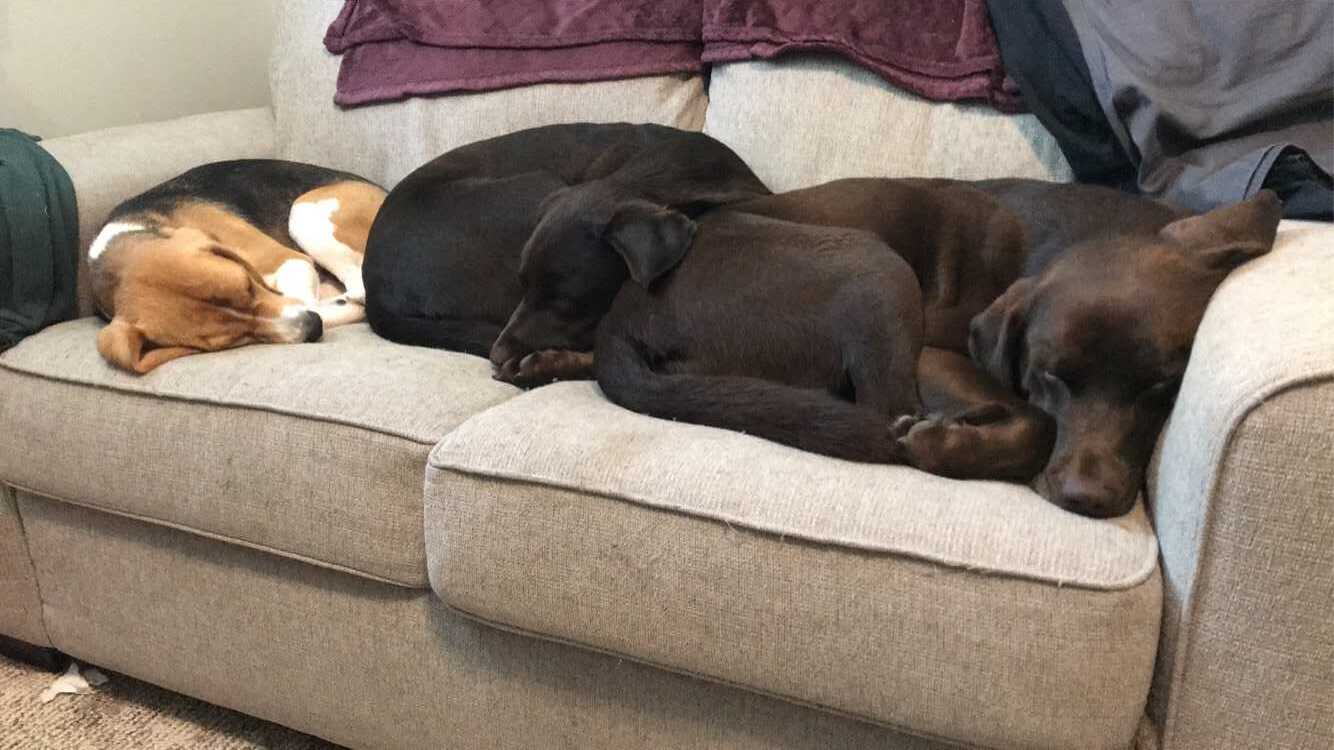 We all know to let sleeping dogs lie—but when, where, and for how long? Like it is for humans, getting enough quality sleep is important to dogs’ health and wellbeing. Here’s an eye-opening overview of the subject—so you can rest easy knowing that your pup is, too.

How much sleep do dogs need?

Generally speaking, dogs sleep a lot; the total amount varies by age and other factors. Puppies, who expend immense quantities of energy growing and exploring their world, may sleep up to 20 hours per day until they’re around 16 weeks old. Estimates for adult dogs vary—it’s generally accepted that “normal” adult dogs may sleep anywhere from 10 to 16 hours per day. Larger and older dogs tend to sleep longer than younger, smaller adult dogs. However, dogs’ sleep cycles differ from ours, and your pup isn’t going to get under the covers at midnight and sleep until noon or 2 p.m. the next day. Their sleep will be spread around over shorter intervals. Dogs’ need for more sleeping hours stems from technical differences between their slumber and ours; they make up for less REM sleep and more interruptions with a greater quantity of sleep. 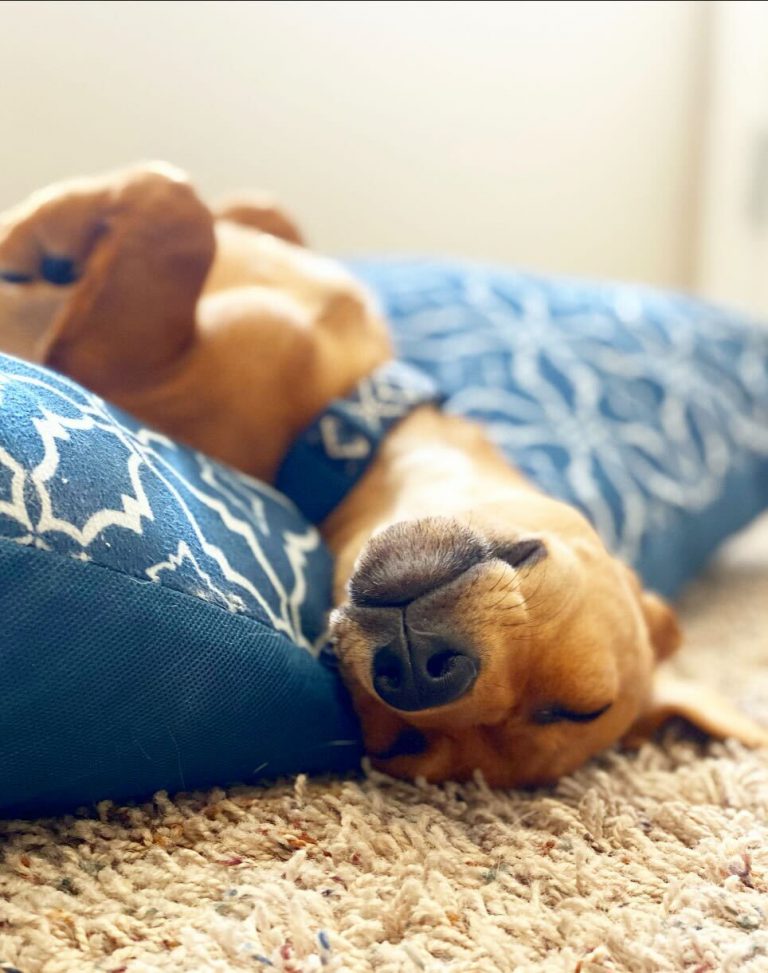 When should my dog sleep?

Behavioral expert Dr. Stanley Coren has said that dogs will adjust their sleep schedules to suit their circumstances—so a dog living with you might sleep more or less or at different times, within reason, depending on your habits. Dogs are lighter sleepers than humans, which many owners notice when they open the refrigerator, get up to go to the bathroom, or say anything that sounds remotely like “outside.”

Give your dog opportunities to rest at times of their choosing, and keep an eye out for any unexpected changes to their routine. As long as your dog has enough chances to sleep, they should be okay.

Having said that, it will be better for human and dog alike if you stick to a schedule. This is especially important for puppies, who have demanding sleep and bathroom needs. Train your pup to get used to resting at certain times, and give them bathroom breaks to avoid accidents. For more on training a puppy, consult our guide.

How can I help my dog sleep better?

Crate training, their own bed, and plenty of physical and mental exercise during waking hours can all help your dog sleep better. Make sure your dog can sleep independently. We love cuddling with our dogs—more on that later—but, particularly when your pal is a puppy, they should learn to get to sleep without being on your lap or right next to you.

Dogs can also benefit from exposure to natural light around dawn and dusk—and, while it’s unlikely that your furry friend is spending their nights scrolling through Twitter, some experts recommend that you limit artificial light before and during their slumber.

What position should my dog sleep in?

Your dog may sleep in a number of different positions, and most of them should be fine as long as they work for the individual dog. Some common dog-sleeping positions include:

Your dog may also have preferences about where they sleep—burrowed under a blanket, on a favorite expanse of cold tile, or on your lap. By the way, don’t forget to wipe your dog’s paws when they get dirty and wash your dog’s bed from time to time to prevent too many germs from gathering there.

What does it mean if my dog’s sleep patterns change? Can a dog have insomnia?

While dogs’ sleep needs change as they age, any sudden shift in their habits may indicate an issue.

If you have a senior dog whose sleep patterns have changed—and if they’re pacing at night instead of sleeping—talk to your vet. A disrupted sleep cycle can be among the signs of dementia in a dog. In fact, if your dog has any type of rapid and drastic disruption to their habits, talk to your vet to rule out illnesses and other problems. 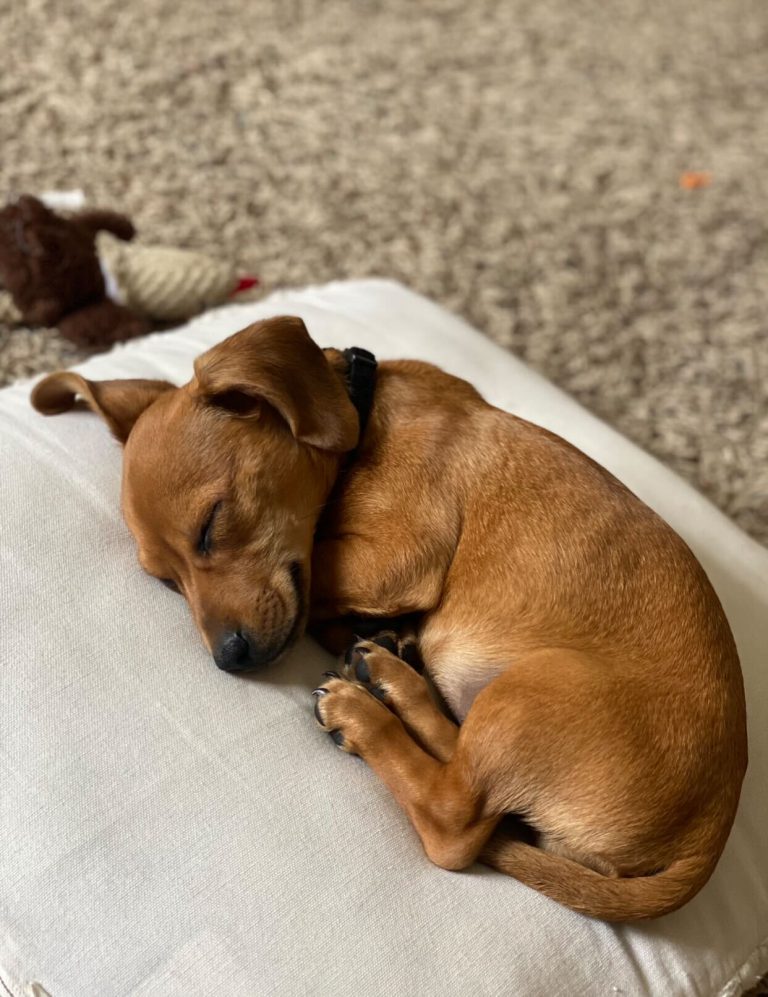 Should I let my dog sleep in my bed?

This question divides dog owners and trainers, but whether a particular dog should sleep in a particular human’s bed depends on the needs and preferences of that dog and owner. Surveys have found different estimates for what percentage of dog owners co-sleep with their best friends, but they commonly find that a majority do so.

Scientists who’ve researched the impact of dogs in bed on human sleep have found that people are usually able to sleep well enough with their canines—in a recent study, they even found that children get better sleep on average with a pooch or other pet next to them.

Dogs might track dirt or germs in from outside. Those with compromised immune systems should exercise extra caution and consult their doctor about what’s safe. And anyone who’s letting a dog into their bed would be well advised to wipe their paws after coming in from a walk and bathe them on an appropriate schedule. But, while it can happen, transmission of zoonotic disease from well-cared-for family pets to humans is not especially common.

Many trainers say that it’s a good idea to keep your dog in their own bed for the start of your relationship and while they’re going through basics like potty training, crate training, and learning boundaries in the home. Longer term, keep in mind that there’s a difference between letting your dog do whatever they want all the time and proactively making your bed one of the places they’re granted access to at night. When you bring a new dog home, give them their own designated spot to sleep, at least for a while, and—if you want to—invite them into bed at a time that’s right for you. As long as you are consistent in the rules you set for your pup, giving them one more place to hang out with you does not have to equal disaster.

Think about your decision before you let your dog sleep with you—if you do let them into the bed and change your mind later, it may be a challenge to set new rules. And if your dog becomes aggressive or “guards” their spot in the bed, that is a serious behavioral issue and you should contact a trainer to address it.

Some dogs won’t even want to sleep in bed with their humans, and some humans may prefer their own space. And if your dog might get hurt getting into bed, or because you kick or roll over onto them at night, then it’s best for them to stick to their own bed or crate. Don’t feel guilty if that’s your choice—one of the same studies about how well humans slept with dogs found that dogs slept well on their own, too.

Yes, sometimes. And snoring is not always a problem.

Brachycephalic, or short-snouted dogs, are more likely to snore—and while you need to be careful about exercise and extreme heat with them, some snoring is to be expected. It may be the sign of a mild respiratory illness—just like humans, dogs can become congested from a cold. They can also snore as a reaction to environmental irritants, allergens, or medication, or because of their sleeping position.

Obese dogs may snore, and this can be dangerous—in extreme cases, an obese dog’s trachea may collapse. If your dog is obese, consult with a professional and start following a realistic plan to get them to a healthy weight.

If your dog starts snoring when they hadn’t been doing so before, or if their snoring is becoming more frequent or intense, you should bring them to the vet. Sometimes snoring can be caused by allergies, a blockage, or a serious illness that requires medical attention.

Why do dogs circle and dig the bed before sleeping?

There’s not one certain reason for this behavior, but we dug deep to find some plausible explanations. On possibility is that they’re simply making their sleeping area more comfortable.

How close to sleep should my dog eat and drink?

It depends on your dog. However, most dogs benefit from a predictable meal and sleep schedule and do better if they aren’t eating too close to bedtime. If you give your dog food and drink right before bed and don’t take them outside to go to the bathroom, there’s a chance they’ll wake up in the middle of the night with what Seinfeld’s George Costanza would call an “impending intestinal requirement.” Late-night feeding also means their bodies are digesting food during the night, which isn’t ideal. You’ll gradually get a sense of your own pup’s needs and preferences as you live together—but if you have questions, reach out to your vet.

Yes! For details on this delightful fact, read our article about dogs dreaming.